It’s that time of year again: the temperature is rising, the snow is melting, and special interest groups are launching campaigns to allow motorized vehicles on non-motorized trails.

Here in Wisconsin, the reoccurring battleground is the Gandy Dancer Trail. Much of the Gandy is already motorized, but there is a 42-mile stretch from St. Croix Falls to Danbury which is free of vehicular traffic. Every summer, thousands of families come to Polk and Burnett counties specifically to ride on this renowned trail. However, there is currently a proposal to significantly increase the number of special use permits which allow motorized vehicles on the trail. If those permits are granted, there’s a very real possibility that riders will have to contend with vehicles on a large percentage of summer weekends spent recreating on the Gandy.

It’s not as if the Gandy is a gnarly piece of singletrack. The trail is an old railroad bed, so there is hardly a hill or a turn to be found. But the trail is a tremendous tourist draw to our region because, being non-motorized, the trail is even and smooth. The surface is limestone, but it’s so hard packed you can cruise along on anything from mountain bikes to road tires. In trail passes alone the Gandy brings in an average of $10,000 to Polk county and $3,000 to Burnett county annually.

The main benefit of this trail is that in an era of texting drivers, the Gandy provides a safe place for children to ride their bicycles. The Gandy Dancer is a tremendous place for kids to learn about mountain biking and to have their first introduction to a lifetime sport. But it’s not as if the Gandy is just for kids. It’s a marvelous greenway that is ideal for bicycle tourism, and is also utilized by the Wisconsin Ice Age Trail.

From its inception, the Gandy has been designated as a non-motorized trail (see this timeline of the history of the Gandy). Grants were procured to surface the trail with the stipulation that it would remain non-motorized. Yet every year there is a movement to get motorized vehicles on this trail. This is despite the fact that the vast majority of county roads in Polk county are open to ATV use (for a detailed map of ATV trails, click here). In fact, the Polk County Snowmobile and ATV Council web page boasts 350 miles of motorized trails in the county. 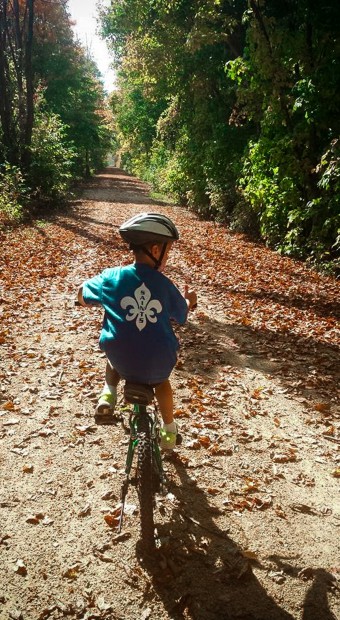 In 2014, two special use permits were requested and granted, in 2015 the number jumped to 5, some of which are two-day permits. Jurisdiction over the Gandy is a little complicated. The DNR issues the permits in accordance with the “Master Plan” for the trail. Since the Gandy goes through two counties, there are two Master Plans, one for Polk county and one for Burnett county.

We feel that if the democratic process is followed in this area, the majority opinion would be to keep the Gandy Dancer trail non-motorized. However, there has been evidence of individuals making attempts to push changes through using aggressive tactics. For example, there was a huge cyclist turnout at a recent government meeting to discuss the issue. These cyclists had come to speak out against an increase in the number of special permits. Observing that the room was filled with cyclists, a motion was made to strike the item from the agenda (to be reinstated at another meeting). Fortunately, this motion was overruled, and the cyclists were allowed to speak. It is very difficult to organize a turn-out, so the effort to bury the item was an attempt to undermine the efforts of the people who had sacrificed their evening to speak publicly about their position. I might add that this meeting was held on St. Patrick’s Day… because when you want a massive public turn-out, you put meetings on holidays.

The permits were being requested purportedly to hold a disabled veterans’ ATV ride, even though that objective conflicts with the preference of disabled veteran cyclists. It cannot be overlooked that there are numerous disabled veterans who appreciate the status of the Gandy as a silent trail, and who ride it on adapted bicycles. At the public meeting, those speaking against the permits were subjected to a lecture on patriotism (public comments were closed so this had to be endured without opportunity for retort). The insinuation that the cycling community is in any way anti-veteran is extremely insulting. Cyclists absolutely honor the sacrifice of the men and women who served in our armed forces, and will defend the rights of these veterans to continue their enjoyment of non-motorized trails.

In part, there could be a disconnect about how much damage motorized vehicles do to a trail. Some groups probably think that cyclists are simply being unreasonable and that there is no valid argument against opening the trail to “shared use.” However, I’ve ridden the Tuscobia trail, which is open to motorized use, and the trail surface is a nightmare. Anyone who compares an 80-mile ride on the Gandy to an 80-mile ride on the Tuscobia will see that there is a major difference (mainly because you won’t finish the Tuscobia ride).

The main problem in opposing changes to the Gandy is that local activists don’t have the background in government to plan an effective strategy. Over the last couple years the hope has been that this problem will go away, but it has become obvious that if the Gandy is to remain non-motorized, it will take a grassroots preservation effort. I would like to appeal to any of you who have had experience in this type of issue to please send me tactics and suggestions for keeping a trail non-motorized. If any of you are lawyers, or have worked in government, I’m sure you could provide invaluable advice. What organizations exist that can help to preserve a trail not only now, but for the foreseeable future? Also, if you’d like to be on an “action” email list for requests to assemble and to send letters to government officials, please send an email with “Gandy” in the subject line to: WalterRhein@gmail.com.

Honestly, I’d prefer not to be involved with this. I’d prefer to play with my kids, attend to my career, and ride my bicycle in the evenings in quiet solitude. However, my grandfather didn’t go to Germany during World War II so I could fail to speak out on an issue I feel is important.

One great way to help out with this issue is to simply send an email to some of the members of local government telling them: how much you appreciate non-motorized trails, how good they are for the local economy, how they are a tourist draw, etc.  Here are some relevant email addresses of local decision makers that would like to hear from you. Please note, these individuals have expressed neutrality on this issue and they are eager to learn the reality of how important silent trails are to the cycling community (be gentle with them):

I included my email at the end so I can use your emails at public forums. Also, feel free to sound off in the comments below!  Thanks!

Trails
The Envy of the PNW: the Organization and Woman Behind...
Trails
News: Trail System in Beatty, NV Opening for Business with...
Trails
Opinion: Why every day should be "Earth Day"
Trails
Five2Ride: Mountain Bike Trails in Washington

Thanks for a great article — and timely, too, with e-bikes looking to gain access to nonmotorized trails.

I’d never even considered e-bikes–that’s an interesting topic as well. I’ve seen what ATVs will do to the Gandy because it’s open to ATV use in the north. The knobby tires and high speeds give you sugar sand and washboard ruts that are difficult to navigate on anything less than a fat bike. As long as the speeds were slow on an e-bike, I wouldn’t be too concerned with them at this point. How prevalent is e-bike use and how much damage do they potentially do to trails? Thanks for commenting.