I first heard about the new Captain Ahab trail from a video sent to me by a friend.  So this weekend Adelle, her hubby, and I decided to go check it out.  We left early Sunday morning to get to the parking area before the crowds.  Spring in Moab means the bike trails are as crowded as they are in Grand Junction, so being an early bird is important if you want to have a little more space on the trail.

Disclaimer:  If technical slickrock climbing is not your thing, don’t ride this trail.  Much of the first half of the ride will be climbing up and over grippy rock.  I loved it but I realize not all will feel that way.

Captain Ahab branches off from the Amasa Back trail in Moab. We drove out Kane Creek road and parked in the designated “Amasa Back” parking lot.  From here you can see the trailhead about 1/2 a mile up the road.  If you’ve never ridden Amasa Back take a moment to stop and survey the entrance but know that it’s rideable if you’re familiar with technical terrain.  Take the right line to the midpoint and then cut left across the rest.  Be careful because the next obstacle is a huge jump!  If you bear left around the tree there’s an easier route but you still might have to walk it.

Amasa Back is exciting climbing.  It’s one technical slickrock piece after another and it’s awesome!

After 2.3 miles you’ll see a sign that says “Captain Ahab mid-point.”  Keep climbing up a steep ramp and for a bit longer still to reach the beginning of the Captain Ahab trail.

*If by this point you’re really hating life, I should warn you that the first part of Captain Ahab involves even more climbing.  It’s super fun climbing over slickrock, but it’s still climbing.

The first “it just rolls right off” moment pops up abruptly but trust me, it really does just roll right off!

Soon you’re cruising along, up, over, and around rocks, ledges, and drops.  So many times I thought, “If I stop right now I’ll crash,” and so I just kept riding over obstacles.  Still, it’s important to stop and take in the views.  Right now the La Sals right are still snow-covered; rising high above the desert floor they provide an amazing contrast to Moab’s red rock. 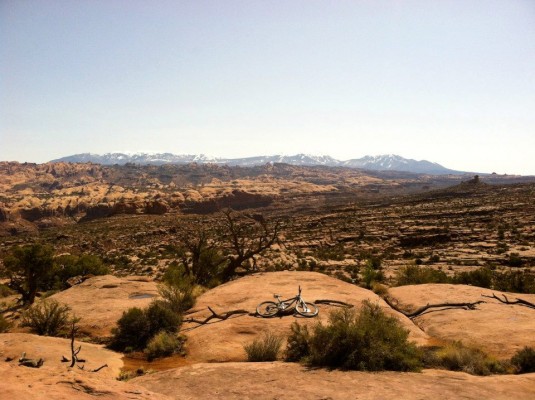 Flow is an issue on the first part of the trail as it gets interrupted by short climbs quite frequently.  Still, it was a fun test of endurance.  It’s not long before the trail just opens up, allowing riders to bomb down long, flowing sections of trail while occasionally glancing down to follow the dots. 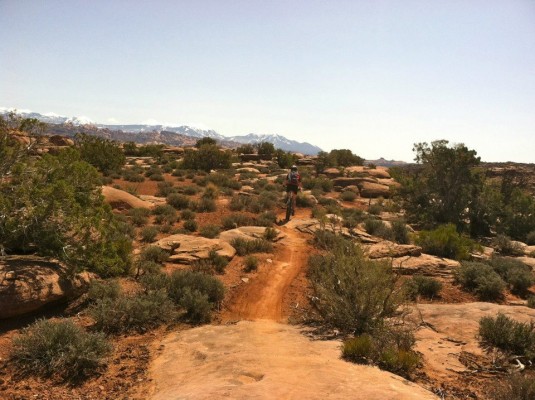 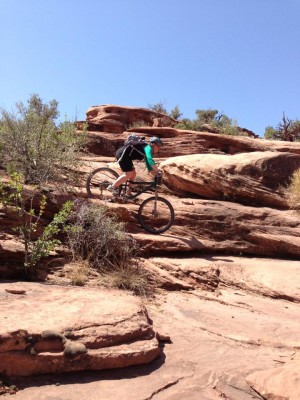 Toward the end a sign warns of cliff exposure ahead and then later on a sign tells you to walk your bike.  Plenty of people ignore this sign and just ride the section anyway.  Compared to other “exposed” trails like parts of Porcupine Rim and the Portal Trail, this exposure is mild.  I was tired though and walked parts of it.  Really it amounted to maybe 2/10 of a mile.

Soon you’re back at the junction with Amasa Back where it appears everyone in town has come out to tackle the trail including all the jeepers!  It’s at this point you’ll just be glad you started early and are now heading back to your car for after-bike libations.

Let me be just a bit corny and say Captain Ahab is a whale of a trail! 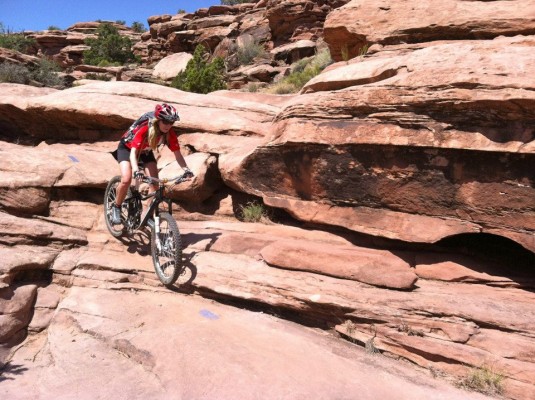 very cool. i was just telling a friend to hit this trail after reading such great reviews about it. looks like a blast!

This sounds like so much fun! I can’t wait to hit moab again!

It’s definitely one of those trails where you start to wonder if you’ve lost your mind because there’s no way that climbing for that long should be fun…but it IS!

I have got to make the trip to Moab! Thanks for the great review!