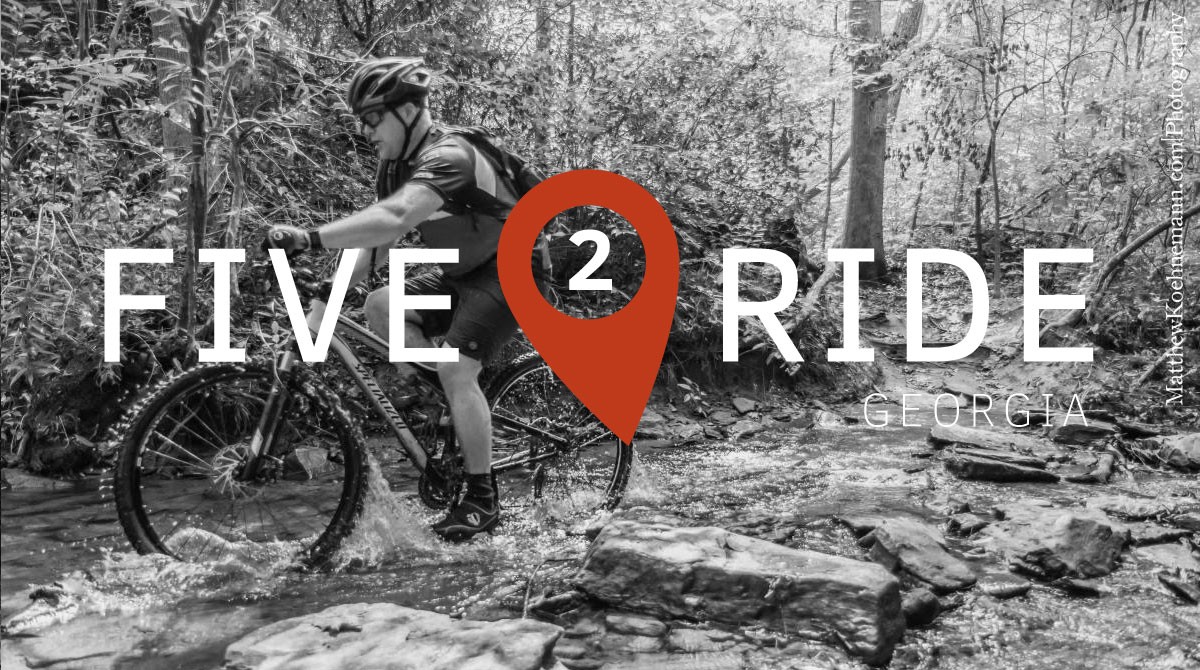 While reviving our Five2Ride series as the northern hemisphere plunges headlong into winter might not seem logical, the reality is that mountain bikers around the world are still riding dry singletrack… even in January. One of the best places in the US to ride during the winter is actually the state of Georgia.

While it can get chilly and wet during the winter even in the South, snow rarely falls in Georgia, meaning that there’s no off season for winter sports–it’s just bikes, bikes, bikes all the time! While obviously Florida, and even Alabama and South Carolina to an extent, are more temperate during the winter than Georgia, North Georgia is home to legitimate mountains: the beginning of the Appalachians, and consequently epic mountain biking by any standard.

So if you’re planning to head south this winter, here are the five best trails in Georgia that you need to hit:

Bear Creek is synonymous with the best in North Georgia singletrack shredding, thanks to its lengthy history as a heritage trail, beautiful views from the top, and ripping singletrack next to a rushing creek. If there’s one ride you need to do in Georgia, it’s this one.

The descent from the Bear Creek Overlook is one of the best in the state. Little Bear Creek (the very top) has a couple of tight and technical switchbacks. After crossing the wide, shallow creek you get a ripping fast, wide open double track descent.

Once you go through the gate the trail narrows and you’ll be hauling ass through rhododendron. Eventually, you’ll make a 180 degree switchback and you’ll descend parallel to Bear Creek. This is the best part of the trail with lots of rocks to gap and jump off of. There are little bonus ninja lines everywhere.

A classic loop is to ride Bear Creek > Pinhoti 1 > Pinhoti 2. If you’ve really got the legs, get Pinhoti 3 as an out and back in there as well.

If you’re in the area don’t miss this ride. -Aaron Chamberlain

The Pinhoti Trail is a 140-mile route that begins near Ellijay and Blue Ridge and runs all the way to the Alabama border. While some portions of this route are on paved roads and brief stretches are off limits to bikes, at least 100 miles of the Pinhoti in Georgia is rideable trail, offering some of the very best backcountry singletrack in the state! Outstanding segments include the sections near Dalton that are used for the Snake Creek Gap race, and the P1, P2, and P3 segments near Ellijay, which connect to Bear Creek, mentioned above.

So great to have a long distance trail in Georgia! The Pinhoti is quite diverse along its length: everything from flow-style trails to sustained rock gardens; ridge riding to killer descents and climbs; and even gravel road grinds. I would love to be able to check off all sections one day. -Jeff Barber

Five Points is, by all objective measures, the best network of trails in the state! Plenty of mileage (over 20), entertaining, well-built singletrack filled with challenges and flow a-plenty, and scenic rolling hills all combine to make an act that’s almost impossible to follow.

Couldn’t get enough – was back out yesterday to log 16 miles. Crosscut & Bella better as a route back to 5 pts. Tailings & Hogsback are expert due to the narrowness and angle of the track – better the second time thru after you know what to expect – easier if you keep your speed up. There was one other car at the trail head, but I never saw another person all morning. -nvrenf

With over 30 miles of riding, including extended climbs and ripping descents, the Bull and Jake Mountain Trail System has rightfully earned its IMBA Epic status. There are enough trails and possible different combinations to keep you entertained here for, quite literally, years. I know–this used to be my home trail system. While the trails are indeed fantastic, be sure to grab a quality map before you head out into the woods, as navigation can be difficult for the uninitiated.

I feel like these trails don’t get the love they deserve. I remember going here for the first time back in early January and it being 30 degrees and having a blast. It’s my favorite trail since then in Georgia, just slightly better than the Bear Creek-Pinhoti area. Here you can do about 35 miles, I believe, of a nearly pure singletrack loop and if you want to do more, just combine it with Winding Stair. The backcountry feel also adds a special touch to this place and it has some decent views. Avoid going through the first part of Jake Mountain during the cold season, though, which you can easily find a route around, due to the deep creek. Also go down Bull Mountain and up Saddle Back for an easier climb and funner descent. -GTechRacer

Blankets Creek is one of the best-known trails in Georgia–much of its popularity results from its proximity to the metro Atlanta area. But don’t let the hordes of Atlantans keep you from riding here: with diverse cross country trail loops and even a downhill jump trail, Blankets Creek offers great riding for all types of mountain bikers, and the one-way alternating traffic helps spread people out.

The most meticulously well-maintained trail I have ridden. Very fun with something for everyone, including some flat and easy stuff for beginners. Facilities are top-notch, as is the downhill area. That could keep you entertained for an entire afternoon by itself. It does get extremely crowded, so plan accordingly. Bottom line: no matter what level of rider you are, you will have fun here. -bonzo248

Your Turn: There are many more excellent trails in Georgia than simply these five. What are your favorites?

Mountain Bike Podcast
Fabio Wibmer Talks Confidence, Perfection, and Inspiration [Podcast #272]
Trails
News: Curt Gowdy State Park to Offer Groomed Trails for...
Trails
10 Trails You Like More than Me
Trails
10 Trails I Like More Than You

You nailed it Greg…great riding year-round in North Georgia. I live in Dalton, which puts all of the trails mentioned within a 1-hour drive. Also great access to the best singletrack in Southern Tennessee…Raccoon Mountain, White Oaks, Enterprise South, Tanasi, and Brush Creek/Boyd Gap. In my opinion, this makes Dalton, Georgia one of the best jump-points for mountain biking in the Southeast. I rode in Colorado and Utah this summer…obviously some of the greatest trails in the United States. Returning to ride in North Georgia/Tennessee was NOT a disappointment…GREAT singletrack.

You would think by their reputation that trails in the West would destroy those in the Southeast…not so. There’s something about the trees here that make it special. I think the soil is better as well (of course that varies from trail to trail, but still…). I currently live in Columbus, GA, but I’d like to move to somewhere around Asheville, NC. The driving roads are excellent in the mountainous areas in the Southeast as well.

+1 on all the excellent shredding around Chattanooga–I love that whole region! Stay tuned for another article, coming soon, discussing the Chattanooga/Dalton area 🙂

Bear Creek is best to do as an out and back… very few riders do the back loop because it really is no fun, or
well used so it is not in the best shape. Start from the bottom and go up, as it is better to end on a fun down hill then to have to work to get home plus lunch at the top is the BOMB!!!

All of these are trails I certainly plan on hitting VERY soon especially Bear Creek and Bull & Jake. I suppose I am a bit biased living in the backyard to the Chicopee Woods/Elachee trails over near Gainesville/Oakwood. 21 miles of various Beginner and Intermediate (8) trails to mix it up. Trails are very well maintained by local NE Ga SORBA Chapter. Very few hikers but, plenty of deer!

Greg, I know this is a rehash of an article a year ago but I just can’t believe you’ve not updated it and added the awesome, beautiful Chicopee Woods Trails on here in the Top 5. Come on dude! You know it is! ha