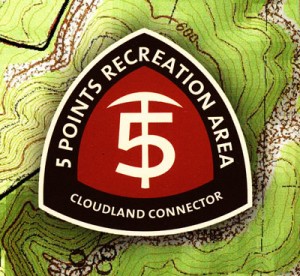 On Thursday Greg and I met up for a ride at the Five Points trail system in far northwest Georgia. I needed to get in a 6 hour ride as part of my training for the Cohutta 100 and the descriptions we read promised 20 miles of singletrack plus another 10-mile out and back trail called the Cloudland Connector. After dropping Greg’s truck at the Flying J off I-75, we drove past the Pinhoti trail to the 5 Points trailhead on Hwy 157.

The trailhead facilities at Hwy 157 all looked brand new – changing area, composting toilet, and trailhead kiosk – with room for at least a dozen cars here (there’s also a much larger parking area off Ascalon Rd). Parking is $5 which surprised us, though not entirely.

The 5 Points Recreation Area sits on about 200 forested acres surrounding Round Mountain, site of coal mining operations between 1858 and 1947. After various land purchases and transfers, SORBA Chattanooga and the Lula Lake Land Trust worked together to build the trails and opened the 5 Points Recreation Area in 2011. All the trails are well marked and there are usually free maps available at the trailheads.

THE INTERSECTION. Photo: GoldenGoose. There are at least 3 trails to GoldenGoose’s back in this photo.

Greg and I started out on the Bankhead trail, quickly arriving at a major intersection we could only assume was the namesake for the trail. In fact, we counted 11 trails radiating from this gap in the hills and chose to ride the expert-rated Slickenslide trail first. What a blast! This trail is basically a 1-mile linear pump track with jumps, rollers, and rhythm sections – a totally unexpected find in a State Park.

We returned on the Cloudland Connector trail to the 11-way intersection and chose the next trail in the rotation, Hanging Wall. At the end of the trail we stopped at an overlook where Greg snapped a photo with his iPhone. From there we hit half a dozen more trails, filling out the petals on this flower-patterned trail system. After about an hour and a half of riding, Greg realized his iPhone had dropped out of an unzipped pocket on his pack – and clearly he was worried. Knowing what it feels to lose something valuable on the trail (or anywhere for that matter – I once lost a pricey DLSR camera after leaving it on the roof of my car), I immediately reassured him we’d find the phone.

Since we were the only ones on the trail that day, I knew we didn’t have to worry about anyone finding the phone before us. Conditions were great – sunny skies, dry trails, and we had the whole day ahead of us. We started off by immediately retracing our route, heading down the Kettle Bottom trail in the opposite direction we had just ridden. Greg suggested we each scan one side of the trail to make sure we didn’t overlook anything. Unfortunately we had ridden many bench-cut sections with steep slopes on the sides which meant the phone could have ended up far off the trail. Trying to lighten the mood, I suggested the chance the phone was in the middle of the trail was at least 50%.

After completing a slow roll of Kettle Bottom, we arrived back at THE INTERSECTION where I volunteered to ride down to the car to get my phone and call Greg’s phone. While we had ridden about a dozen miles so far, the trail system is fairly compact and it seemed possible that we’d be able to hear Greg’s phone ringing. Turns out that was wishful thinking. After calling the phone 16 times from various points around the trail system, we didn’t hear a beep.

We retraced our entire route from the morning, in some cases doubling and tripling back on the same trails. Finally, I suggested we give Kettle Bottom one last try – Greg seemed to think that was the most likely place the phone was dropped and we had only searched that trail once. Nearly 3/4 of the way back around the loop and less than half a mile from the point where we started our search, I found it, sitting right in the middle of the trail! Somehow we both missed the phone the first time around; had we seen it, the search would have lasted 10 minutes or less. Instead, we clocked at least a couple hours looking for the phone.

Of course all was not lost – we still had plenty of daylight and I needed to get in a solid 6-hour ride. We continued on to explore the southwestern side of Five Points where we encountered the first mountain bikers of the day. On the Torino Hill trail we got our first taste of the rocks and were caught completely off guard by the stacked boulders on the Caprock trail. Caprock is rated an intermediate trail but was easily the most technical riders will encounter here. Greg wanted to session the rocks but I was glad to keep moving. 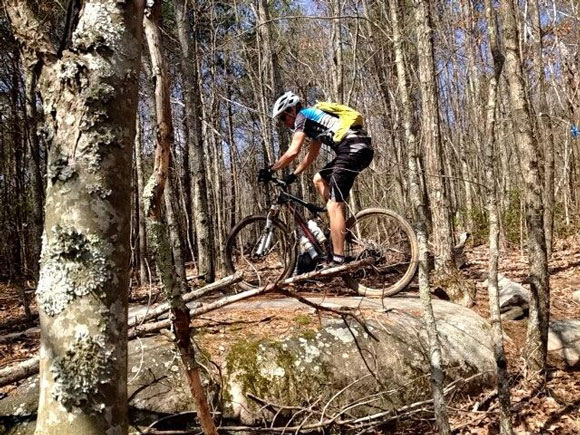 We continued to the Ascalon trailhead and rode the short expert-rated Hogsback trail back toward the other trailhead. Aside from Slickenside, all the expert-rated trails at Five Points traverse decades-old coal tailing piles. Tailings are basically the rocks and dirt left over after coal has been separated during mining. I’d say some of the piles are at least 20 feet high and over the years trees and vegetation have grown in to create some unusual conditions. The trail snakes through tailings gullies, teeters along the ridge tops, and plunges up and down the sides. You never know what to expect around the corner since the piles are irregular and unnatural, making for some seriously fun singletrack. Unfortunately this was a training ride so I didn’t have time to snap any pics. 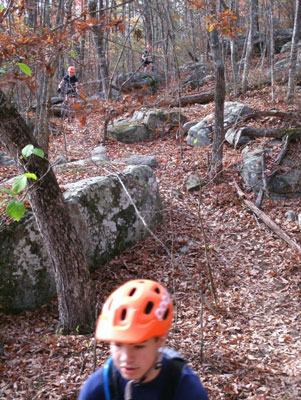 After being on the trail for more than five and a half hours, we decided to ride a bit more and explore the Cloudland Connector trail. Looking at the map, we figured we could ride singletrack to the trailhead on the other end then return on the paved highway if necessary. The signs indicated it was about 7.5 miles to the end and conditions started off fast!

We reached the highway in no time but realized we had ridden less than 2 miles. Turns out our map didn’t show the rest of the Cloudland Connector trail so we didn’t know what to expect from the rest of the ride. After the highway, the trail pointed downhill and appeared to be entering a canyon. Not sure if the trail would turn back up the other side, we decided to call it quits and head back to the car. 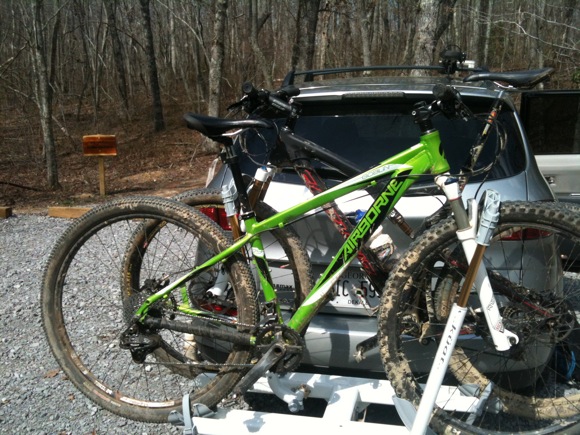 In the end our trail time was 6 hours, 20 minutes – not a bad ride for a Thursday. On the drive back, Greg said 5 Points might just be the best trail system in Georgia and I think he’s right. As part of SORBA Chattanooga’s vision for 100 miles of singletrack in the area, 5 Points is an amazing trail system and a huge accomplishment. Upon further research, I found this tidbit from the Lula Lake Land Trust – “Development should be patterned on a comparable facility at Tsali in the Nantahala National Forest.”

Watch out Tsali – 5 Points may just become the next crown jewel of southeastern singletrack!

Wow! Such a good write up! Did you ride the trail with all the jumps? (tailings run I believe)

You bet dozzerboy – we rode it all! Slickenside is the one with the jumps; Tailings Run is the sorta gully ride down near the trailhead. I think Tailings might be my favorite and it flows slightly better heading up from the trailhead.

Yeah, on slickenslide, me and goldengoose made the mistake of going in fall with all the fresh fallen leaves and I “slid” out on one of the berms. This trail is easily in my top 5 in Georgia.

Congrats on what sounds like a great training day and discovery/exploration of sweet singletrack!

11-way intersection? That makes route selection interesting–maybe it’s a good thing it’s only a 200 acre state park after all–sounds like getting lost would be a distinct possibility otherwise.

So you did 6+ hours–do you know how many miles you covered and how that will compare to your 100 mile challenge?

Glad y’all found the phone. Best of luck on the Cohutta 100!

Yeah, mileage-wise it wasn’t a great day – only 40 miles – but almost all singletrack.

Yeah, I’m sure we could have done more miles if we hadn’t been going so slowly looking for my phone. Thanks again for the patience 🙂 All in all, it was still a great day out on the bike. I’m really looking forward to going back!

@MTBGreg, you need a GPS app for your phone that send out its location when you lose it. 😀

Yeah I COULD have had one set up, but I didn’t want big brother to have his eyes on me at all times. But when it had gone missing, I really wish I had!

Were you able to see the lake and falls? I used to camp there as a kid… beautiful place. Now I GOTTA go back! 🙂

First off, I’m very glad you found the phone. I know how much losing one sucks, even if it is for “just” a few hours. Hopefully, there isn’t a next time, but if there is, remember to have both of you check the trail as you’re scanning each side 😀

Wow, a 1-mile pump track? That sounds like a dream come true! I absolutely love pump track/rhythm sections. So much fun and a full-body workout!

Sounds like you had a great day. nothing like spending all day riding around in the woods, even if half of it is looking for a cell Ph in the forest. Glad you found it.

Cell phone in the forest, needle a haystack… about the same thing. Thinking about getting a red case instead of my current black one…

Red? What about when the leaves are on the ground?

Day-glo yellow or orange is the way to go! 😆

@MTBGreg, with Android, you can remotely install the GPS locator app *after* you lose the phone…. just sayin’

Big brother is watching you anyway, all you’re accomplishing by not fully utilizing the phone’s functionality is inconveniencing yourself. 😀

@Jared13, what he really needs is the funkier shorts I reviewed, instead of getting the phone in and out of the hydration pack. LOL

I have dropped a GPS unit so many times while out designing trails…..that I finally got smart enough to tie a piece of orange flagging tape to it.

Much easier to find, now.

Perhaps the phone has a place you loop a piece of flagging thru.

I just got an iphone handlebar mount in for review. If I attach my phone to the bike, maybe that will make it difficult to lose? Haha!

Spent 2 days riding these trails back in March….awesome, awesome trail system (now that I think about it, will prob make it my destination this weekend) Does anyone know if the connector the cloud land state park is finished? Coming up from Kettle Bottom you could see where they had started the trail back in March…

It’s an older blog but a great one on CC 5 points section. This has really emerged as one of, if not the best, trail systems in the Southeast. The tailing piles are such a cool feature. There’s tons of flow out here and trails for all skill levels. If it wasn’t 2 hours from my house, I would be up here every weekend.