Our second ride of the week proved to be shorter, at less than 9 miles in length. However, thanks to the steep, very technical Sedona riding, it took us about 1 hour and 20 minutes to cover that terrain. Mileage is hard-won in Sedona!

Day 2 consisted of a complicated figure 8-style ride in the Broken Arrow Trail System, referred to most people simply as “The Hogs.” The route we took will show you why… we rode Mystic > Hog Wash > Broken Arrow > High on the Hog > Hog Heaven > Hog Wash > Pig Tail > Peccary > Hog Wash… and High on the Hog and Hog Heaven were, well, quite simply heavenly, and the highlights of the morning.

We began our approach through the lowlands and washes, crisscrossing 4×4 trails along the way. Pretty quickly we began to gain elevation, with a short-but-stiff climb up to the red rock bench for High on the Hog. Before we made the turn onto the best trails of the day, we were greeted by this most excellent sign: 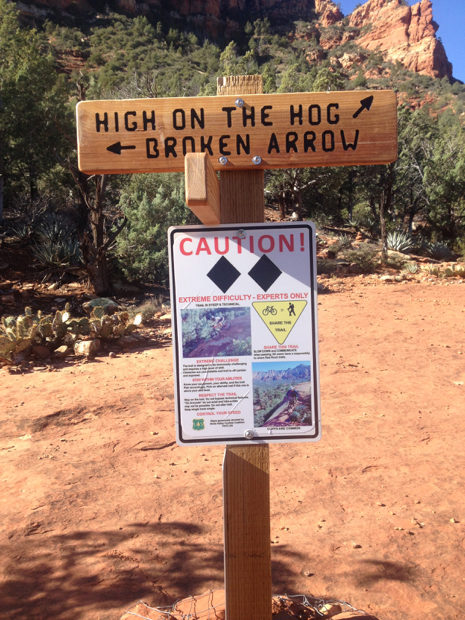 Let me zoom in for you on the most pertinent information: 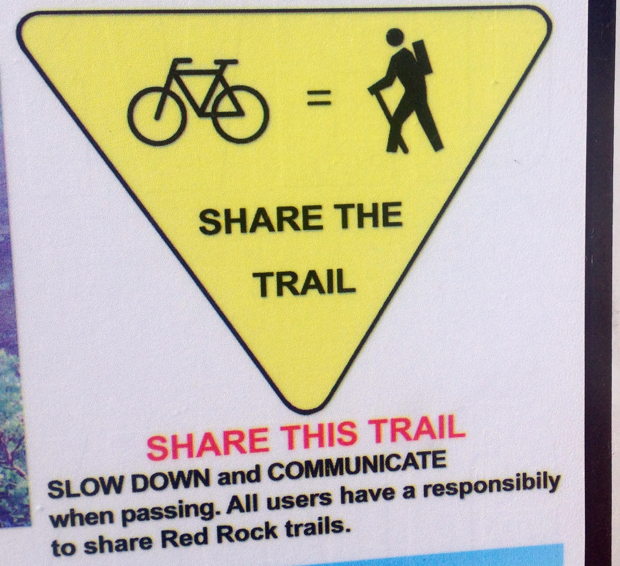 This is, to date, the best trail sign I’ve ever seen–even better than a sign excluding all other users besides mountain bikes. Seriously, though, we’re all legitimate trail users, and we should treat each other with respect and consideration: there isn’t just one group that should have priority over all others. These signs are fully approved by, and installed with the help of, the local national forest service. They aren’t renegade signs posted by outlaws, and they aren’t located on land tightly controlled by mountain bikers. Again, this is national forest.

The trail signs above, putting bikers on an equal footing with hikers, are said to be a result of the highly technical, intense nature of some of the trails in Sedona. In many instances, it’s nearly impossible–or at least, highly dangerous–for a biker to attempt to dismount and yield the trail in some extremely technical sections or steep maneuvers. Especially in these instances, the bikers should have the right of way. In other instances, perhaps hikers should have the right of way. Thus, as the sign says, “slow down and communicate when passing.”

Despite signs like this all over Sedona, we encountered quite a few obnoxious hikers who would barely yield the trail, even when we were coming up behind them. Oftentimes, they’d try to pierce us with a death ray stare as we rode past, as if to say, “we’re trying to find a vortex in which to recharge our spiritual energy, and the fact that you’re traveling on two wheels instead of two feet has completely ruined our experience.” Sedona is quite literally hemmed on all sides by wilderness areas, yet I personally encountered hikers that were immensely put out by the fact that we were biking on the relatively-small percentage of bike legal trails in Sedona–most of which were, in fact, built by mountain bikers (more on that later). Seriously? If you don’t like it, go hike in your thousands of square miles of wilderness.

Granted, we did meet a handful of hikers that were impressed that we were even attempting to ride bicycles on these rocky, technical trails, but Sedona seems to be home to a disturbing number of trust fund hippies exuding an arrogant, anti-mountain bike air. And yet there’s a vibrant bike culture present here at the same time… it’s an interesting combination.

However, on this ride we’d made an early enough start that we saw very few other trail users, and we got to enjoy the fantastic riding on the Hogs all by ourselves! After turning right onto the classic Sedona red rock bench, we rolled along, tackling tech obstacles and gawking at the gorgeous views all around us. Eventually, down on the Hog Heaven trail, we dropped off the bench in a rapid succession of highly-technical moves, which required absolute commitment and no errors!

Back down low, we bombed down Pig Tail and Peccary, launched a few high speed drops and booters, and looped back around for some more singletrack action. 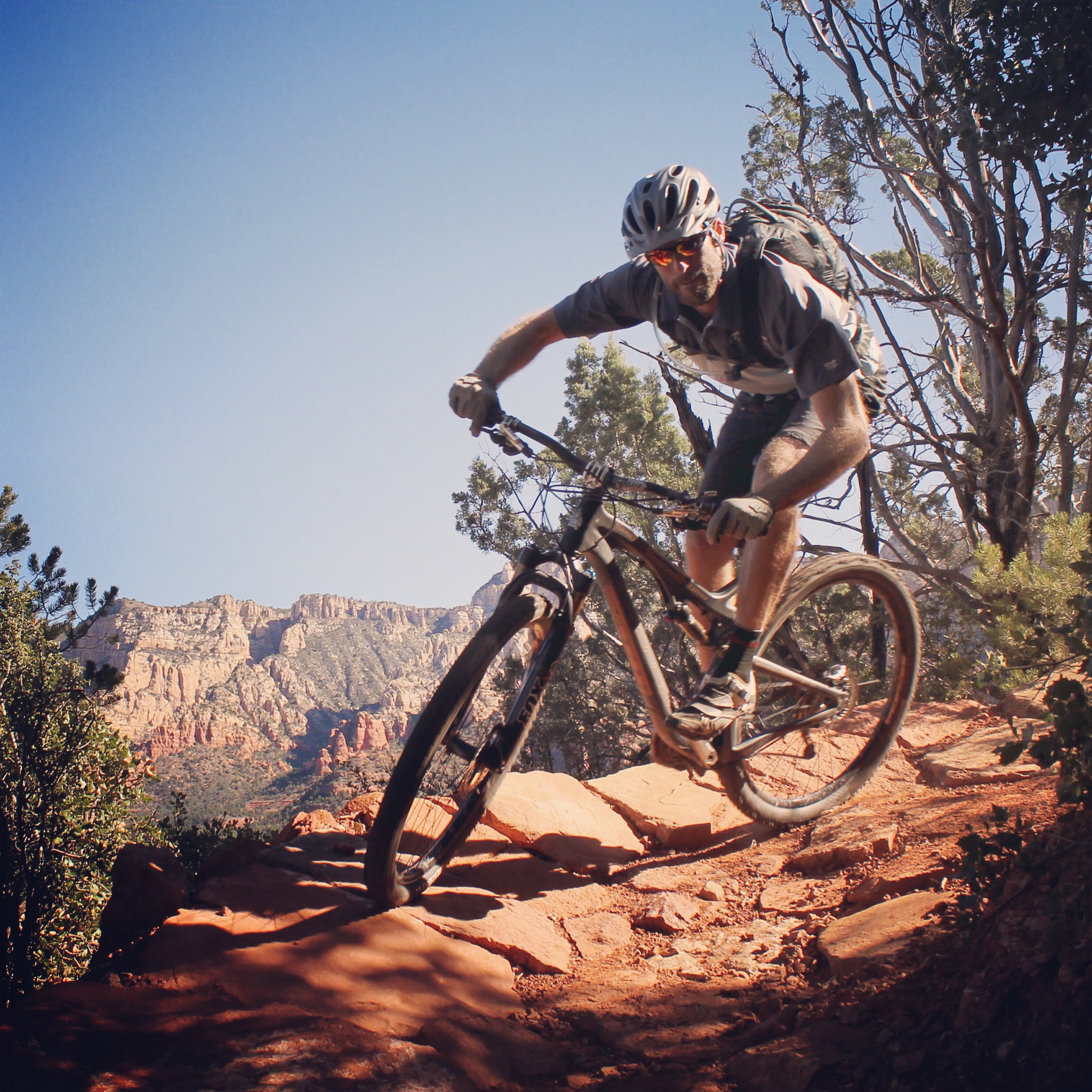 Riding Upper Dry Creek the day before had really been a taster of what Sedona has to offer, and while days 3 and 4 would get more and more intense than even the Hogs, the Hogs are a great way to get an idea of what gnarly Sedona riding is like, while not necessarily committing to a big loop, or being far away from the car. There’s even a bailout option or two along the red rock bench, making these trails a great choice to test the tech waters, with a way to climb out if you find yourself in the deep end of the pool.

While I am rather flattered that people think so highly of my opinion, I have to be transparent and say that I’m not an expert culinary writer. I’m a lowly mountain biker, and I enjoy good beer, burgers, and pizza. So take my dining recommendations with a grain of salt… or a whole salt shaker. And if you like spicy food, grab the red pepper grinder for your pizza.

We had the pleasure of sampling a variety of establishments during our time in Sedona, and here are my impressions.

A local establishment with the moniker “Famous Pizza” was located directly across the street from our lodging at the Sedona Real. Normally when an establishment claims to be “famous,” I expect to be disappointed. But it turns out that Famous Pizza is the real deal. With delicious wood-fired pizza for a reasonable price, we stopped here to grab lunch several times during our four days of riding.

But what truly sets this place apart is the beer.

Famous Pizza is home to the best craft beer selection in Sedona, with rotating taps to bring in new selections every week. You’re bound to spot plenty of delicious Arizona breweries on tap, but I was pleasantly surprised to find beer from breweries all over the western US that I’d never enjoyed before. 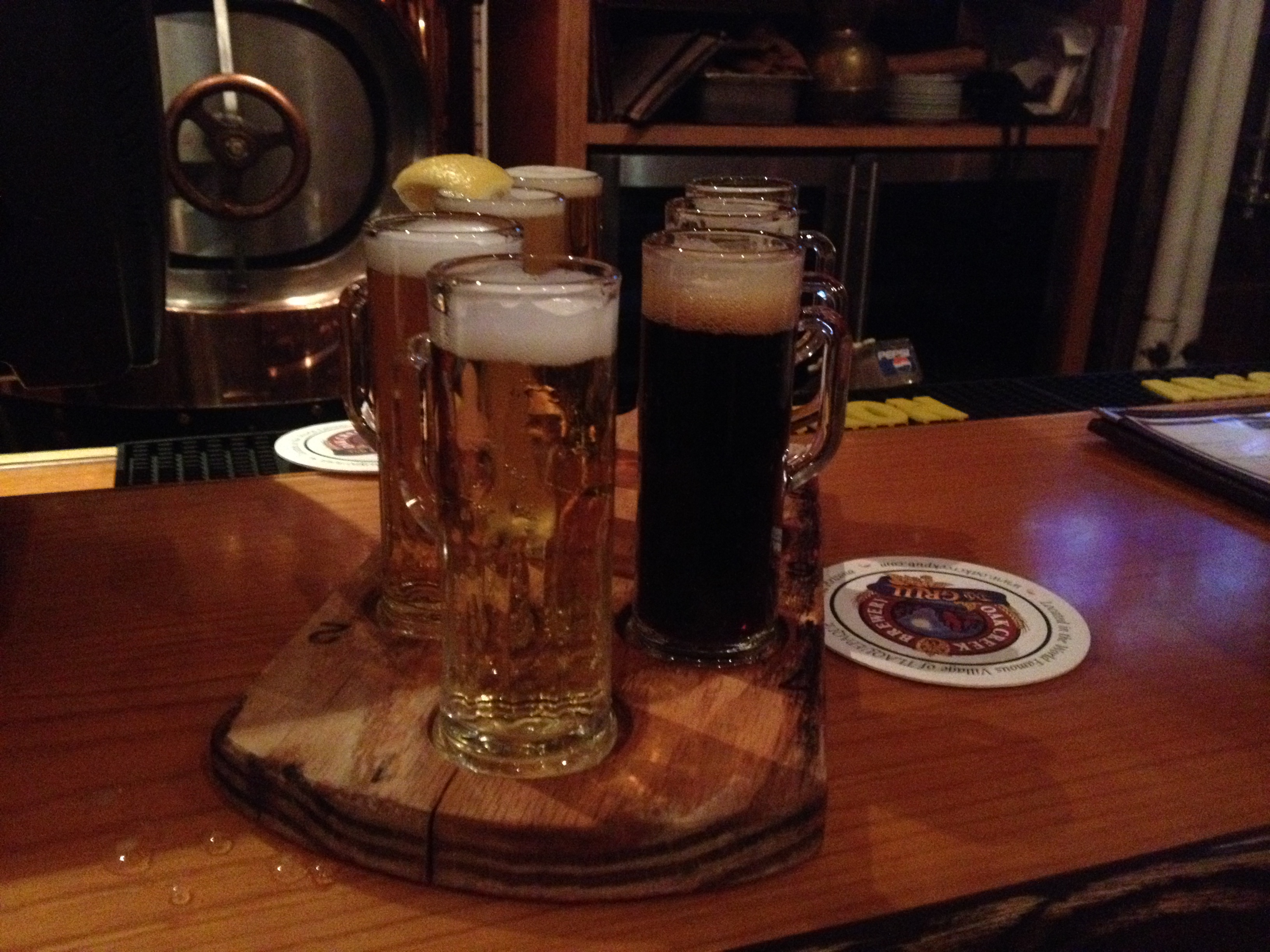 While Flagstaff, located just 40 minutes up the road, is home to 6 or 7 excellent micro breweries, Oak Creek is the only brewery actually located right in Sedona. It’s a popular establishment, and has an amazing dinner menu–be sure to click over to their website and check out the menu, as Oak Creek serves just about anything you could ask for in the food department. They offer large portions and absolutely delicious dishes, and we had a wonderful time eating here. However, if you’re into drinking good, craft beer, you’re going to be disappointed.

We sampled every single beer they had on tap and honestly found their offerings to be very disappointing. It wasn’t that they were serving beers that I personally am not traditionally a fan of. Rather, every single beer that they offered was comparatively tasteless and uninspired compared to the other beers in that category. The pale ale was bland for a pale ale, the brown was watery for a brown, the porter was weak for a porter, and so on down the line. The only beer we tasted that seemed at all inspired or intriguing was a seasonal on tap, but of course that’ll change quickly, so there’s no telling whether or not the next one will be any good.

My advice? If you’re looking for good craft beer, head to Famous Pizza, or just pick up a six pack from the local Arizona beer display at the Safeway.

We had the pleasure of sampling a relatively-new Sedona offering: the Spoke & Wheel. If you roll up on your bike, it’s happy hour all night long with discounted beer and appetizers. Spoke & Wheel also served fantastic burgers, and some other interesting dishes such as a delicious whole roasted chicken.

Want a break from the hoity toity? Olde Sedona bar and grill is a family-style restaurant with a low-key, comfortable atmosphere. My burger there was pretty good but not great, but the atmosphere was such a breath of fresh air from most of the rest of Sedona that the experience was a true win in our book.

Due to its location in the desert southwest, there’s no shortage of authentic Mexican restaurants in Sedona. We grabbed lunch one day just across the road from Over the Edge Bikes at Tortas de Fuego… and when they say “fuego,” they’re not joking. Spicy jalapenos and salsa made from who-knows-what-peppers that will clear your sinuses in nano seconds are readily available. Wash it down with some ice-cold Mountain Dew, though, and you’re good to go!

Love that share the trail sign–wish there were more of these!

I was very intrigued by your review of Oak Creek Brewery. I agree that they have a great atmosphere and a great menu, however when I was in Sedona a few years ago their beer was really good. It sounds like they may have rested on their laurels being the only game in town.

I finally got to the Hogs this Christmas. Great trails!