You don’t end up in Snowshoe, West Virginia, by accident. It is, decidedly, in the middle of nowhere. The nearest town of any size – Marlinton – is 30 miles away, and its population barely cracks a thousand people. From Atlanta, where I live, it was a nine and a half hour drive, the last hour of which I had no cell reception. Even at the top of the 4,700′ high mountain where the resort itself sits, I had no signal. Any direction you look, you are completely surrounded by a lush, green, and dense forest.

As someone who has spent his entire life on the East Coast, I have never felt so remote or so isolated this side of the Rockies. Adding to the feeling of isolation was the distinct lack of other people when I arrived late one Tuesday evening. Summer is the slow season for Snowshoe, and since the bike park is only open from Thursday to Sunday, there were very few folks around.

Since the park was not open on Wednesday, I needed somewhere to ride. After talking to the Bike Park Manager, Philip Yates, he suggested a ride in nearby Slatyfork and put together a 25-mile loop for me. Philip asked me what bike I had brought with me and I told him it was a hardtail. Apparently, for the trails in Slatyfork, that would not do.

And with that, he leant me his week-old 2017 Specialized Stumpjumper. Now, I am no stranger to hard trails on hardtails, but since he was offering…

The trail system in Slatyfork is an easy 15-mile drive from the resort. Just head south on Highway 219 through Slatyfork – essentially just a post office – and turn right onto Mine Road. Then, drive a few miles up the wide, tree-covered gravel road and park at the Tea Creek trailhead.

From the trailhead I rode the Gauley Mountain, Red Run, and Right Fork trails up to the Scenic Highway. After taking in the view at an overlook, there was a rowdy descent down the Tea Creek Mountain trail. In mountain biking, what goes down must get back up, and in this case, I took Bannock Shoals. This four-mile climb featured a steady, but not too steep, grade. Even so, I was losing some enthusiasm by the midway point. Since it was getting late in the day, I opted to shortcut the last couple miles of the loop Philip had laid out. That turned out to be a good decision, as the sky opened up just as I got back to my truck. 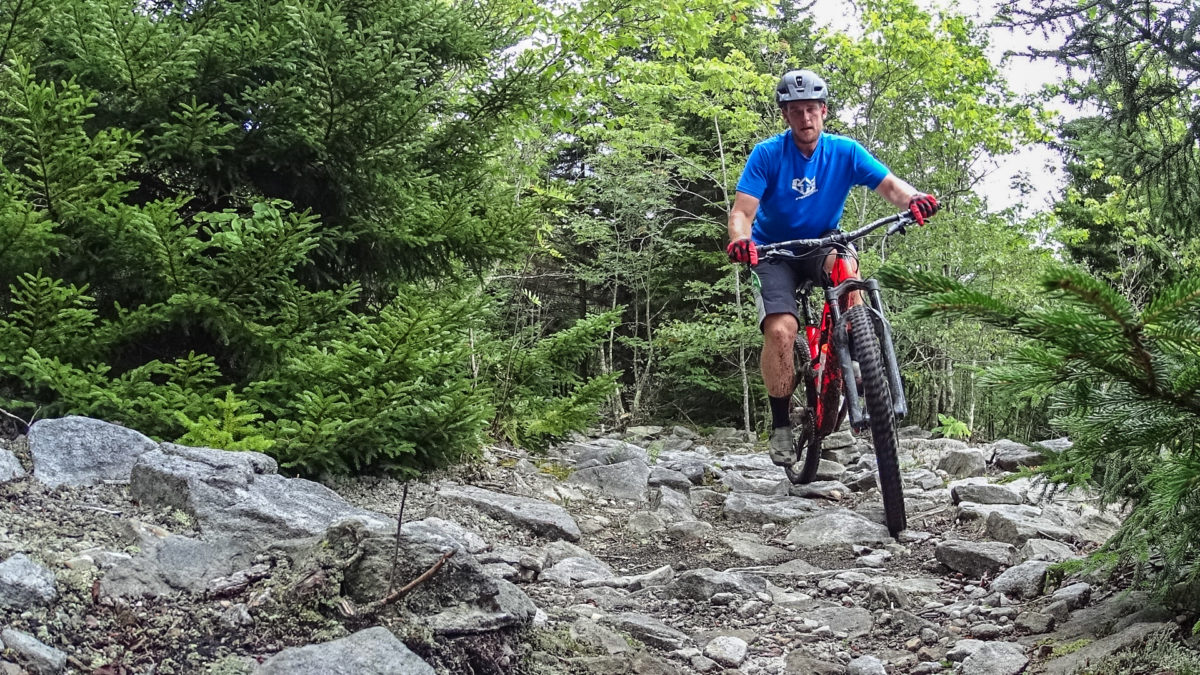 I ended up covering 23 miles and 3,100 feet of climbing, but it felt like much, much more. In many places, the trail was a soft, mossy bog. My tires would sink down a couple inches into the green velvet carpet, sapping speed and energy. The climbs were not as steep as some of our trails in the Southeast, but they were even more technical. To add further difficulty, the roots and rocks that punctuated the climbs were also covered in moss. Not only that, sections of the trail were overgrown with all manner of stinging and scratching plants. My forearms and shins were shredded when I finished.

I only saw one other human during my ride, and that was a motorcyclist at the overlook – I had the woods all to myself. When I stopped to take some photos, I noticed how quiet it was. No people. No distant traffic noise. Just the sounds of the forest slightly muffled by the abundant moss.

While I could have done the ride on my hardtail, I was extremely grateful that Philip was kind enough to lend me his bike. I actually think a 29er full suspension would have done even better on the trails in Slatyfork. In between all those roots and rocks were awkward holes where the 27.5″ wheels on the Stumpjumper often got hung up.

These are true backcountry trails: remote, raw, and relatively unmaintained. If you go to Slatyfork looking for an easy cruise on some flow trails, you will be disappointed. However, if you are out to challenge yourself, they are worth the trip. I would certainly set aside a day to check them out.

Click over to page 2 to read about the renowned Snowshoe Bike Park!