For anybody out there who has dragged their partner out on the trails, they know how quickly a two-wheeled date can turn into a trailside explosion, filled with fire, sparks, and a dusty cloud. Most likely, one is more passionate about the sport and very excited to share it with the other. Or maybe one is a far more experienced rider and won’t shut up about how much they want the other to learn. In either case, it can be a concoction for catastrophe.

Syd Schulz and Macky Franklin know what it’s like. The two, both professional racers for Jamis Cycles, met in college eight years ago, and have been riding and racing together ever since. Syd and Macky have also been living in a van together and traveling to races and ride destinations for the past few years. The two have a YouTube channel titled Syd and Macky where they share their adventures traveling and racing.

While they admit that they haven’t always had it down pat, they have learned a lot when it comes to having a good time together on the trails and how to avoid singletrack squabbles. We talked to Syd and Macky and they filled us in on what they have been up to, why they’ve been racing more XC than enduro, and most importantly, how to get along with your partner on the trail.

After racing enduro for several years, what piqued your interest in racing XC?

Syd: We had been doing the same enduro races over and over for several years and we got a little bored. Also, we wanted to work on our weaknesses in our skillset. That was definitely it for me. I had never raced much XC at all and wasn’t that strong of a climber, so it was fun to try and tackle that.

Macky: I actually raced XC pretty seriously a long time before enduro. It was fun to come back and I wanted to remember what it feels like to be in really good shape. Enduro is a lot of going slow up hills and going fast when you have to. With cross-country, I feel like you work harder all the time, instead of very hard some of the times.

Macky: Initially, we saw it as another way to be valuable to sponsors. When we started doing it, what we really liked about it was that we were connecting with different people who weren’t racing or didn’t follow racing. When [racing is] all you’re doing, you generally run into the same people. To have a bigger audience and connect with people, you can then introduce them to racing, so it’s still racing focused for us, but it’s reaching a broader audience.

Syd: Also, as a pro, I feel like the bike racing world can be really insular and kind of exclusive. You spend time around the same people and can feel like your whole world revolves around your results. It’s been neat to realize that some people don’t care about race results, but are interested in knowing what the experience is like, or feel like trying a race, but don’t feel like they’ve been very included.

What can couples do to avoid frustrating each other on a ride?

Macky: Snacks. Lots of snacks. [They laugh]. Set yourself up for success. Make sure that both people are rested and feeling good, are well fed, and not dehydrated. There’s no point in starting [a ride] in a negative place.

Another thing that’s very helpful is to decide beforehand what the plan for the ride is. That can be as simple as having an order for the trails, or saying that it’s a ride for fun, and that neither are training or trying to go fast. When you decide that you’re going out for fun, it takes the pressure off of thinking that one is slowing the other down, or that you need to be training.

[Sometimes] riding with other people becomes an informal race and I think we’ve all been on that group ride, and I know people who ride like that all the time. But, having different rides for different purposes is important, so if you are different speeds, don’t ride together every single time.

Is it a good idea to rotate the order between the slower and faster rider?

Syd: Usually, things go smoother when the slower person is leading, because there’s less of a separation. That said, I remember when I wasn’t as fast, and wasn’t training or racing, that it can be super stressful to have someone on your tail, so it depends on the person.

I know some people that are happy to go on a group ride, and happy to be in the rear and know that people will wait on them. I also know on the other side, that being on a group ride and having someone that’s slow or having a bad day, as the faster person, you want to be behind them, because you don’t want to get halfway down and realize that they’ve had an issue. If you are the slower person, you might have to realize that [the faster person] will want to be behind you.

Macky: It’s not so much trying to pressure the slower person, but it’s a matter of wanting to be with them, and it’s easier for the faster person to pace themselves if they’re behind you, rather than constantly looking over their shoulder and trying to figure out if they’re going too fast or too slow.

Should the better rider try to coach their partner?

Macky: In general, no. Unless, the person asks for advice. When Syd was not racing seriously, I was quite a bit faster than she was. I learned very quickly, that unless I felt like she was doing something unsafe that I was worried about, it was much better that I just not say anything, and encourage her when I saw her doing something that was hard. If she asked, then I would give it, but unsolicited advice rarely goes over well, especially if they’re already trying hard. Just congratulate them when things go well. Then they get these positive feelings about riding bikes.

Syd: It’s also important for the faster person to be realistic about their skillset or coaching experience. Macky has a lot of coaching experience, and he is very good about giving unsolicited advice, but often he’ll ask or we’ll go out and he’ll help me with a specific skill, so that’s the point.

But, often you’ll see men who are trying to get their significant others into mountain biking [and] they don’t really know what they’re talking about. We see it on the trail all the time. So, to the guys reading, are you a pro athlete? Are you a coach? If no to either or both, get your significant other some professional coaching.

It’s really easy to info dump when you know a lot about riding, but that can be really overwhelming. You might be stoked about explaining proper cornering, but [your partner] just [isn’t] there yet. When we ride with beginners, it’s usually just as simple as getting someone to stand up on a descent.

Is there a good approach to trying to get your partner interested in mountain biking if they don’t ride?

Start on much easier trails than you think they can ride. People are a terrible judge of what they think someone else can do, myself included. Even if you think they’re an athlete and they’ll be fine, take them on a fire road first, and take them up a dirt road and ride together. Then go on a trail.

Syd: This is one that we see a lot on the trails. You see the dude on the $7,000 bike and the wife is having a miserable time 500 yards behind him on something that’s barely a mountain bike, and the guy is giving her a hard time. But could he ride it on that bike? Rentals and demos would be great to see more people take advantage on. There are even a lot of options in the thousand dollar range that are at the very least, competent, good bikes. 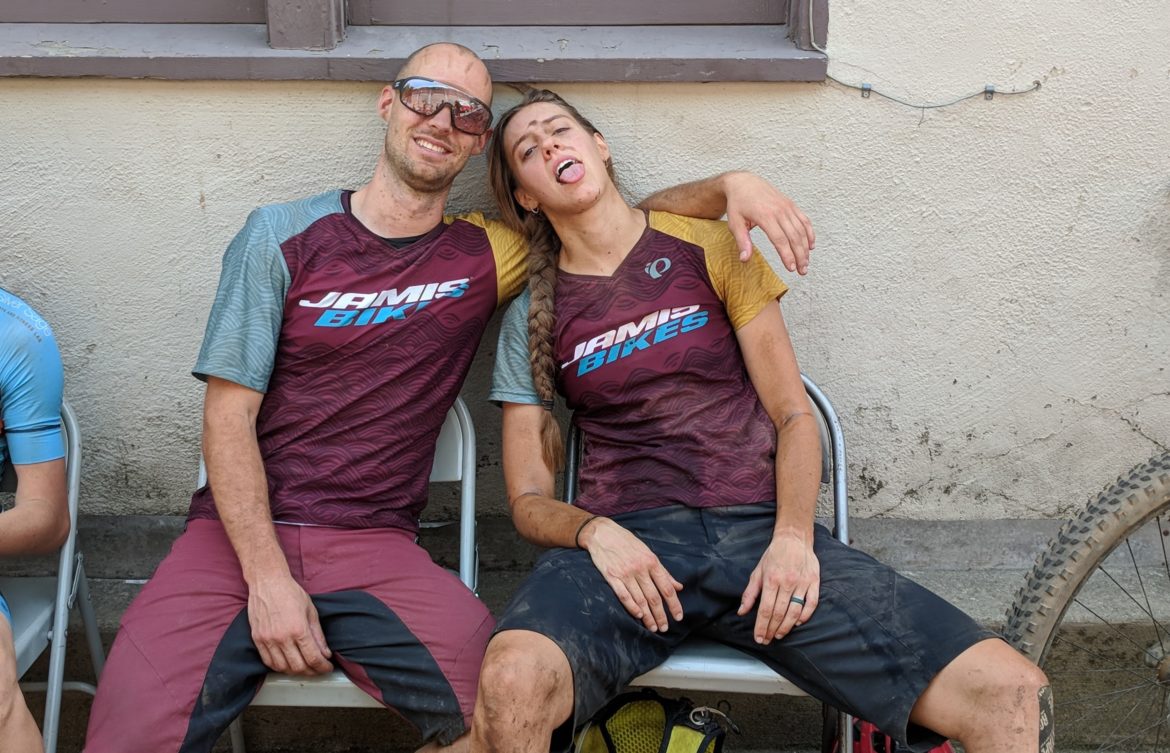 Syd: I think part of the reason it has worked is that we’ve both done a lot of racing and we snap into race mode. We don’t get the emotional vulnerability between us, because we’re focused on racing. I don’t know if that’s true for everyone, but we can snap into it well.

It would be really hard to do a race like that if you were evenly matched with your partner. And, if the faster person has any ego in the result, maybe you shouldn’t do it.

If you’re planning to race together, discuss it, then practice it and plan it, then both of you are on the same page, and you have a plan, and have practiced, and you know what works, which is really important. By practicing it, then you take some of the guesswork out and you can figure out some of those details beforehand.

Like any relationship, communication is the most important part, and if you’re communicating beforehand and during, then you’re going to have a much more successful time.

Many of the same suggestions that I use when riding with my kids.

Mountain biking is like surfing you can go at as a group but you ride as an individual . I have been the person at the slow end at the back of the line and the fastest at the front . Almost always there is somebody faster and slower you will come in contact with . Women and men are built different and think different so you dont see allot of success riding together . I think macky lets syd be in the spotlight and many times at the top of the ticket and I am sure she feels appreciated by him . She is definitely a very good rider and macky doesnt loose much following her .
Chasing someone faster can make you faster if not overwhelmingly faster