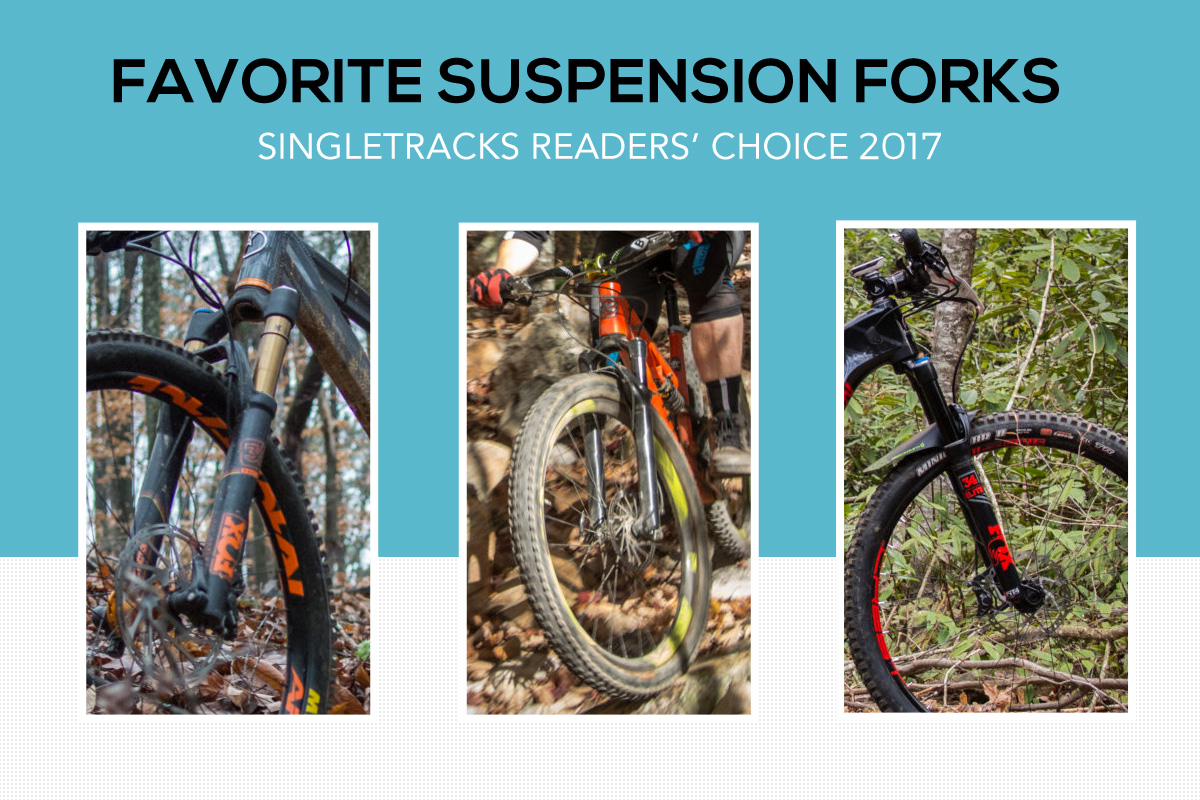 On the surface, there’s nothing too surprising about the most popular mountain bike forks of 2017 from our recent reader survey. The list is dominated by the two biggest players in the suspension market: RockShox and Fox. However, after comparing the results to previous years there are a few insights to be gleaned.

Before that, though, let’s quickly run through your top suspension forks of 2017.

For the second year in a row, the Pike reigns supreme as the most popular fork amongst readers of Singletracks. Much of its popularity is probably due to RockShox’s robust OE-business, but it’s also just a damn good fork. It’s sturdy, relatively light, and comes in a variety of configurations. You’ll find the Pike spec’d on a wide spectrum of bikes from XC to enduro.

The Fox 34 is an excellent choice for burly XC bikes and light duty trail bikes. It’s a hair lighter than the Pike, but then again, it has smaller stanchions. Fox offers three levels of its forks: Performance, which uses a simplified GRIP damper; Performance Elite gets a FIT4 damper; and the Factory level, which adds Kashima coating.

With 36mm stanchions and up to 170mm of travel in the 27.5″ configuration, there’s no doubt that the Fox 36 is intended for hard chargers and big hits. Even so, it weighs just 200g more than it’s skinnier-legged sibling.

Who says XC is dead? Apparently not our readers–or at least, not completely dead. The Fox 32 garnered a respectable 157 votes–over twice the number of votes for the competing RockShox Reba slightly farther down the list.

It appears trail forks are now the most popular type of fork for Singletracks readers. In years past, XC forks like the Fox 32 and the RockShox Reba ranked higher on the list. Those forks still made the list this year, but they account for a much smaller percentage of the total votes. For instance, the Fox 32 had half the number of votes this year than it did in 2016, and the Reba slipped as well.

There are likely a couple different reasons for this. For one, trail bikes are simply the most popular segment of mountain biking. It’s a broad term for sure, but a trail bike can be anything from a snappy, short-travel 29er, up to much longer-legged 27.5″ bikes. Trail bikes are more versatile and therefore more appealing to a wider set of riders. XC either just isn’t as popular as it once was, or trail bikes are pulling double-duty as race bikes.

The other reason has to do with weight. Like many components, newer forks are lighter than the older models they replace. Depending on which models you compare, there’s a quarter- to half-pound difference (100-200g) between a Fox 32 and 34 or a RockShox Reba and Pike. All but the most weight-conscious of riders will accept that minor weight penalty for the performance benefits.

In our 2015 and 2016 surveys, RockShox received more votes in total than Fox. This year Fox edged past RockShox as the most popular brand overall among our readers. It’s a slight margin — 782 for Fox vs. 747 for RockShox — but RockShox was 80 votes ahead in 2016.

Finally, I found it interesting that smaller brands received some real recognition this year. DVO, MRP, and Ohlins didn’t rake in a ton of votes, but a small subset of our readers see them as a viable alternative to the dominance of Fox and RockShox.