If there’s one thing I can’t stand when it comes to bike racks, it’s proprietary parts. In the past, if you had a Thule base rack/crossbars you couldn’t run Yakima trays on that rack. Then thru axles came in and messed everything up, and you had to buy an adaptor to use your old trays with your new bike. 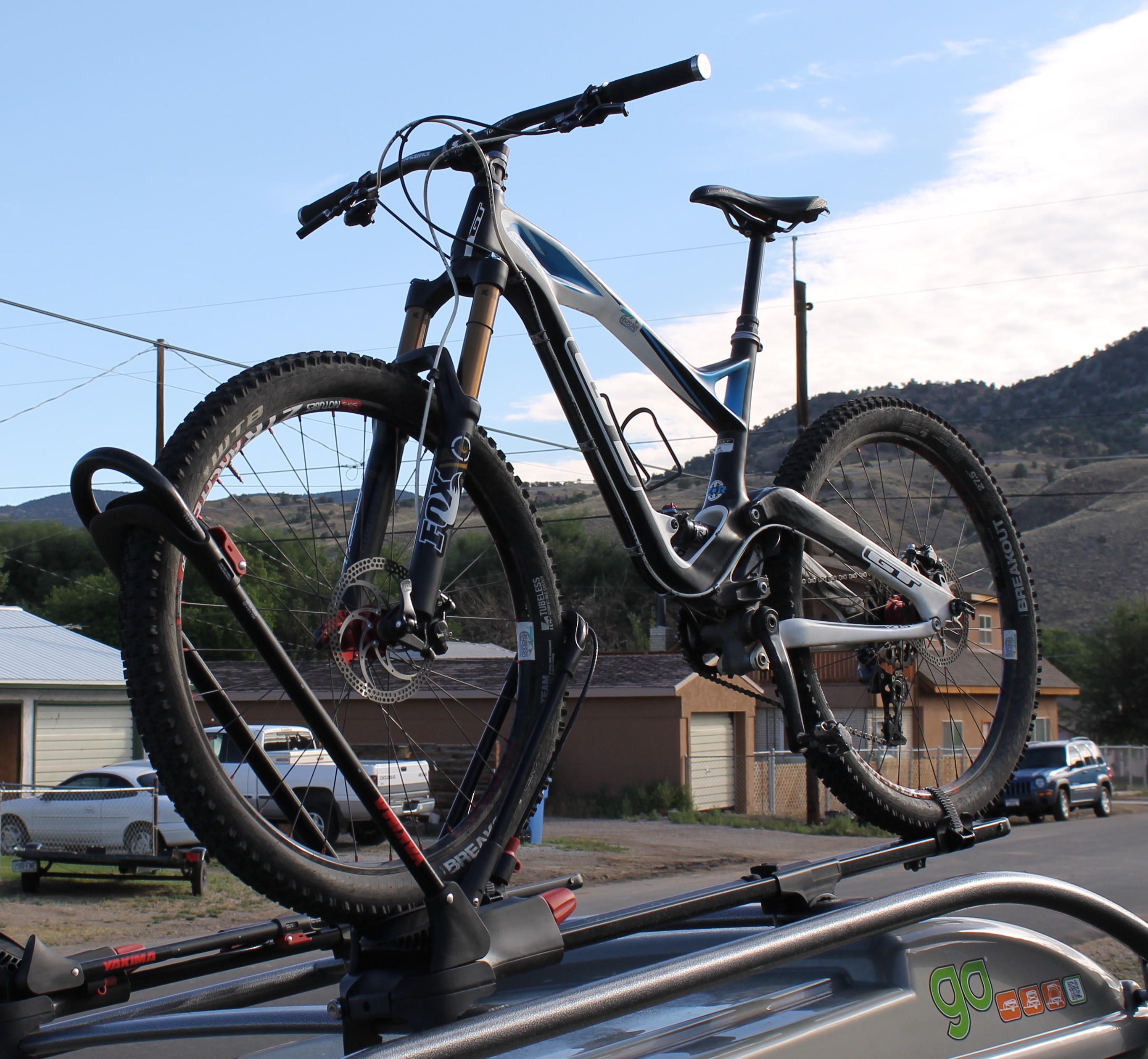 The Yakima FrontLoader tray is here to lay all of my–and your–worries to rest.

First question: what kind of crossbars/racks does the FrontLoader work with?

Answer: it works with almost every kind of crossbar imaginable, without you having to do any complicated reconfiguring. I tested a pair of FrontLoaders using factory crossbars on my Sylvansport GO camper.

Second question: what kind of bikes does the tray fit?

Answer: it fits almost every standard-sized bicycle tire imaginable. The front wheel locking device is adjustable, and has different preset increments depending on your wheel size, ranging from 20″ up to 29″. Mountain bike or road, they’ll all work in this rack.

Note: it probably won’t work with a fat bike, unless perhaps you deflate your tires first–but I haven’t tried that yet.

Installing these trays on my Sylvansport GO was a cinch: I just spun the jaws open, clamped it down on the factory cross bars, and spun them shut. I also purchased locks for the trays (sold separately), and with a full set of locks installed the tray is locked to the rack and the bike is locked to the tray via a cable. 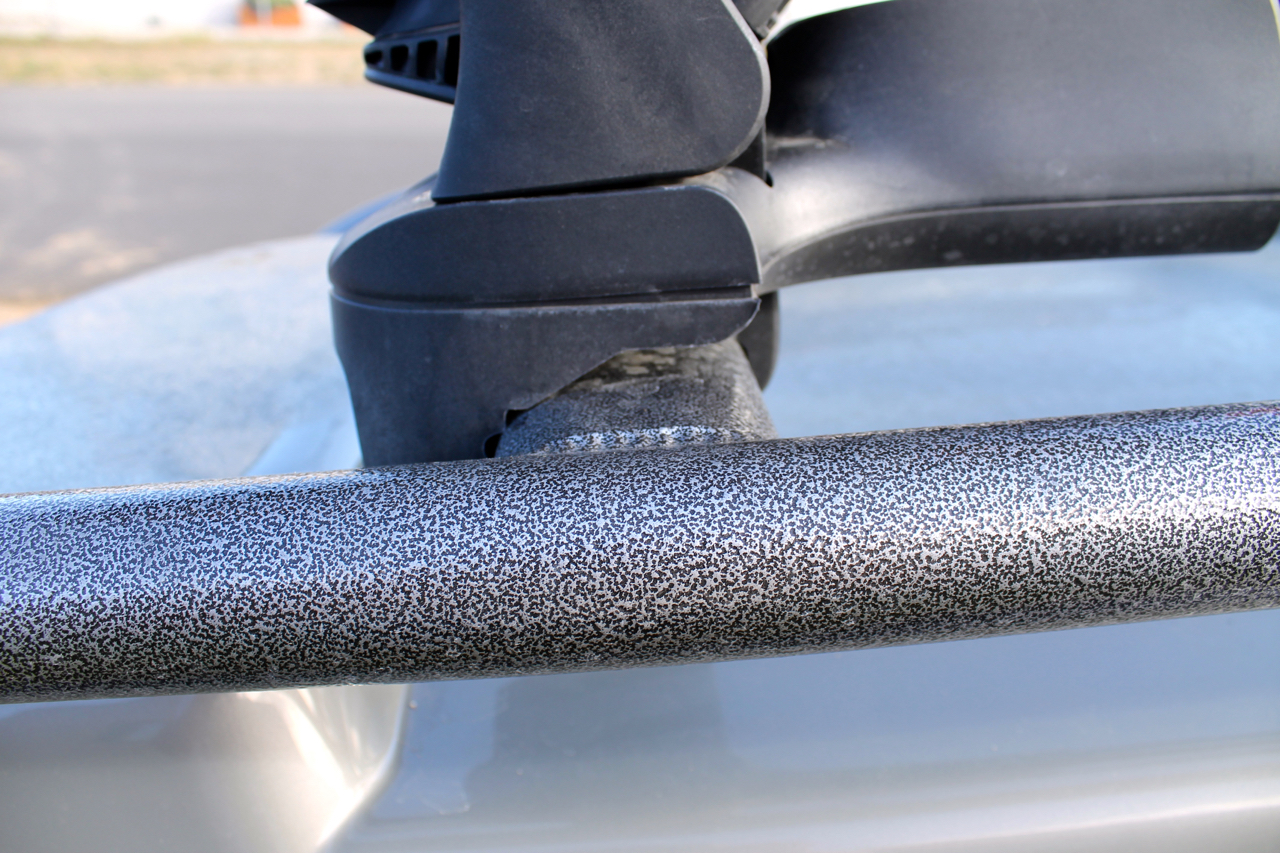 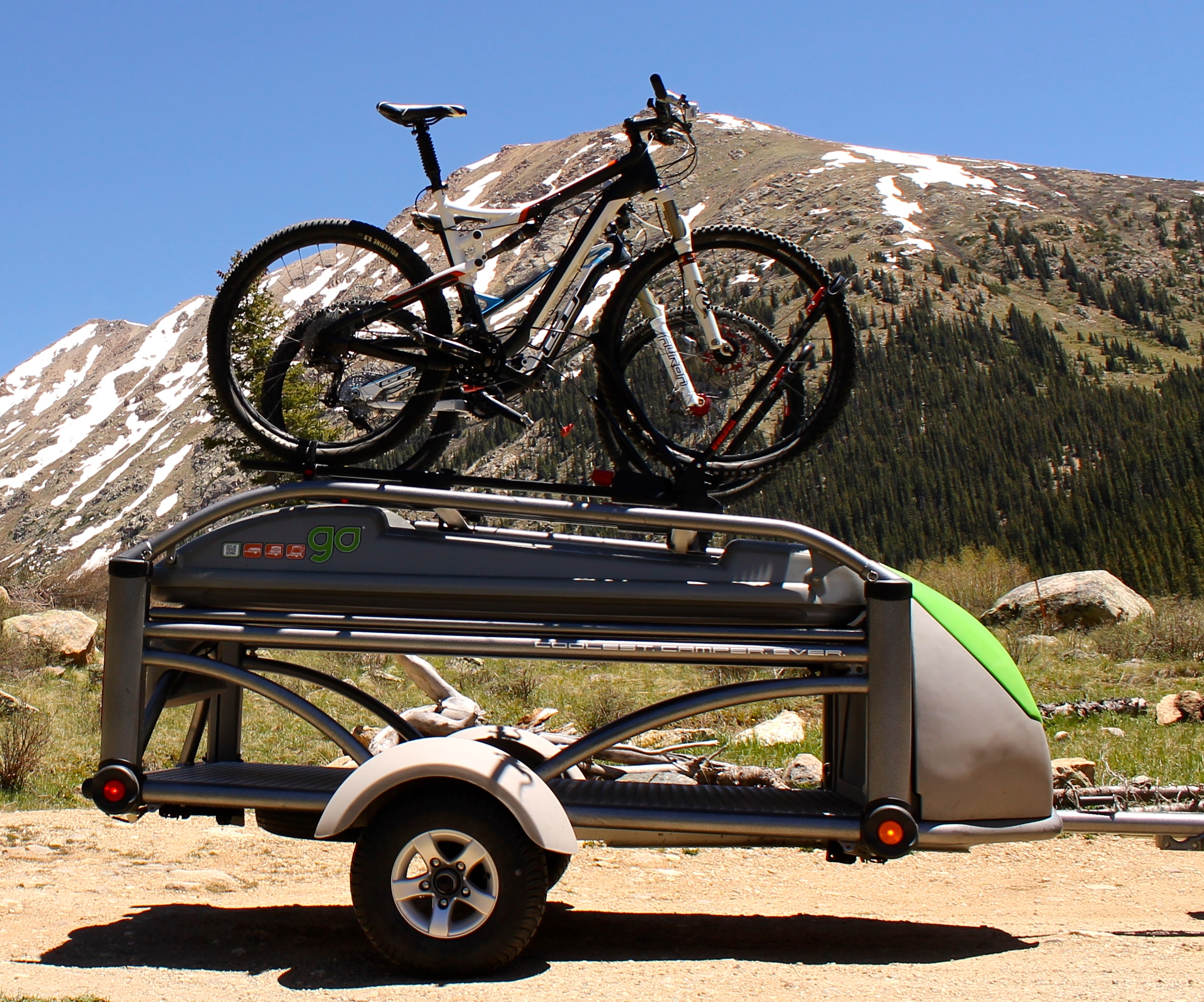 Installing the bike in the tray is relatively simple, once you get the hang of it: 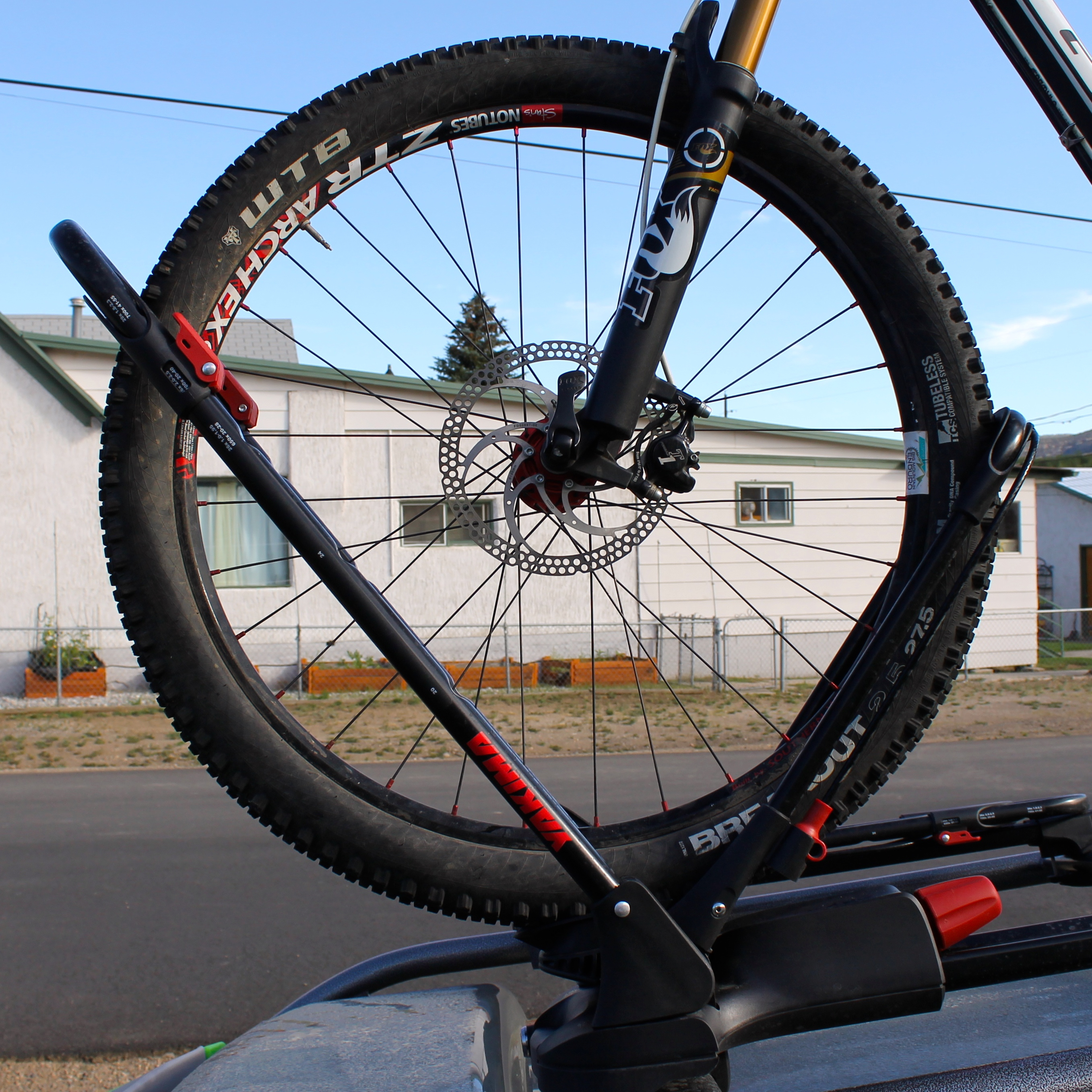 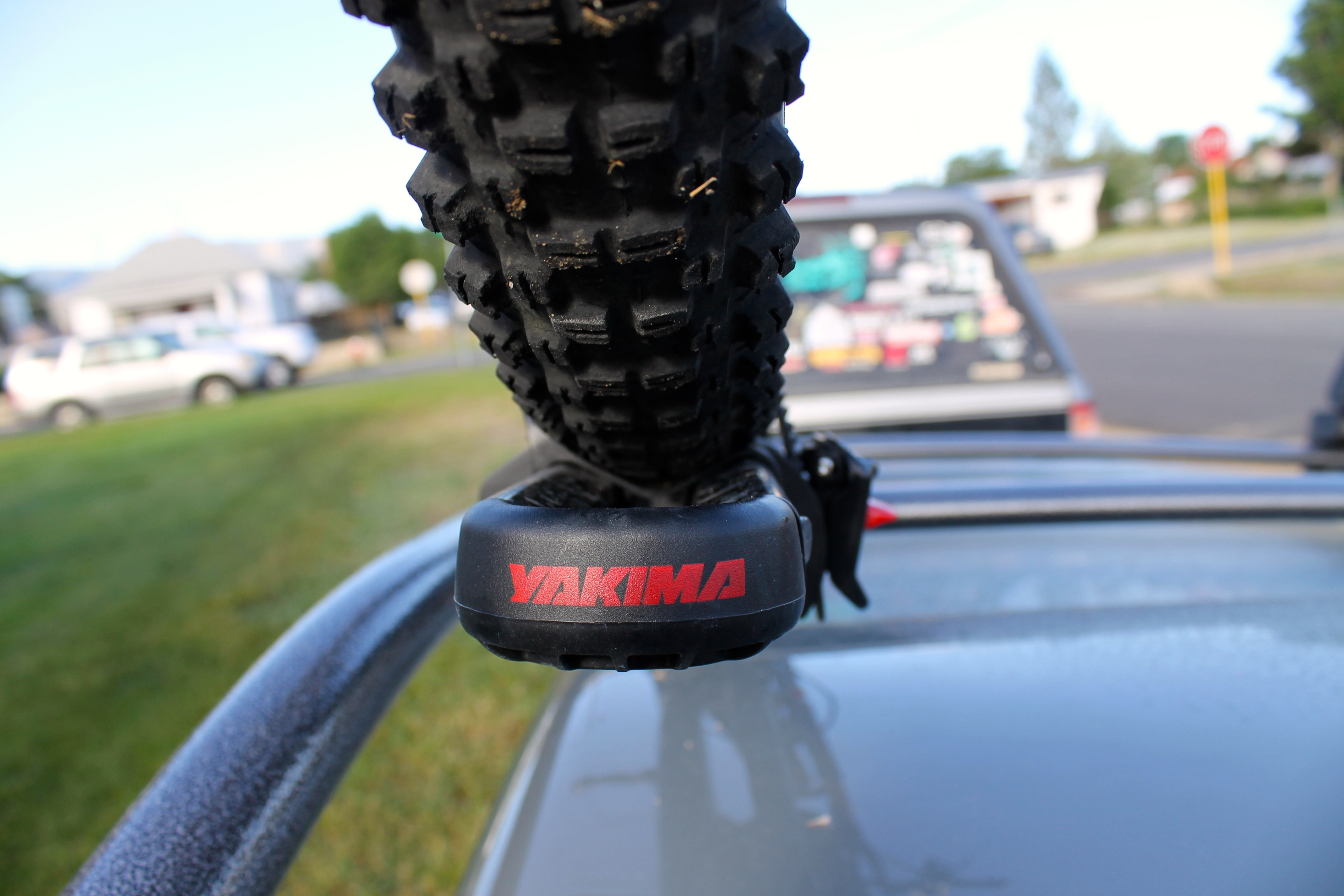 While it took a few words to describe that process, in real life it’s painless, fast, and oh-so-easy. Seriously, the days of removing your front wheel and messing around with a quick release clamp on your fork drop outs are long gone, and I’m so thankful! Not only is it way easier and faster, but you don’t have to worry about backing over your wheel or having enough room in the vehicle for your wheel.

Since the trays were mounted on my camper, I did have some concern about the security of the bicycles when driving down rough mountain roads to reach the campground. Since the camper would bounce and jump over rocks and ruts, it would cause the bikes to sway a bit, seemingly precariously. However, they always stayed put, even after pulling the camper down roads that it probably shouldn’t have traveled down. 🙂 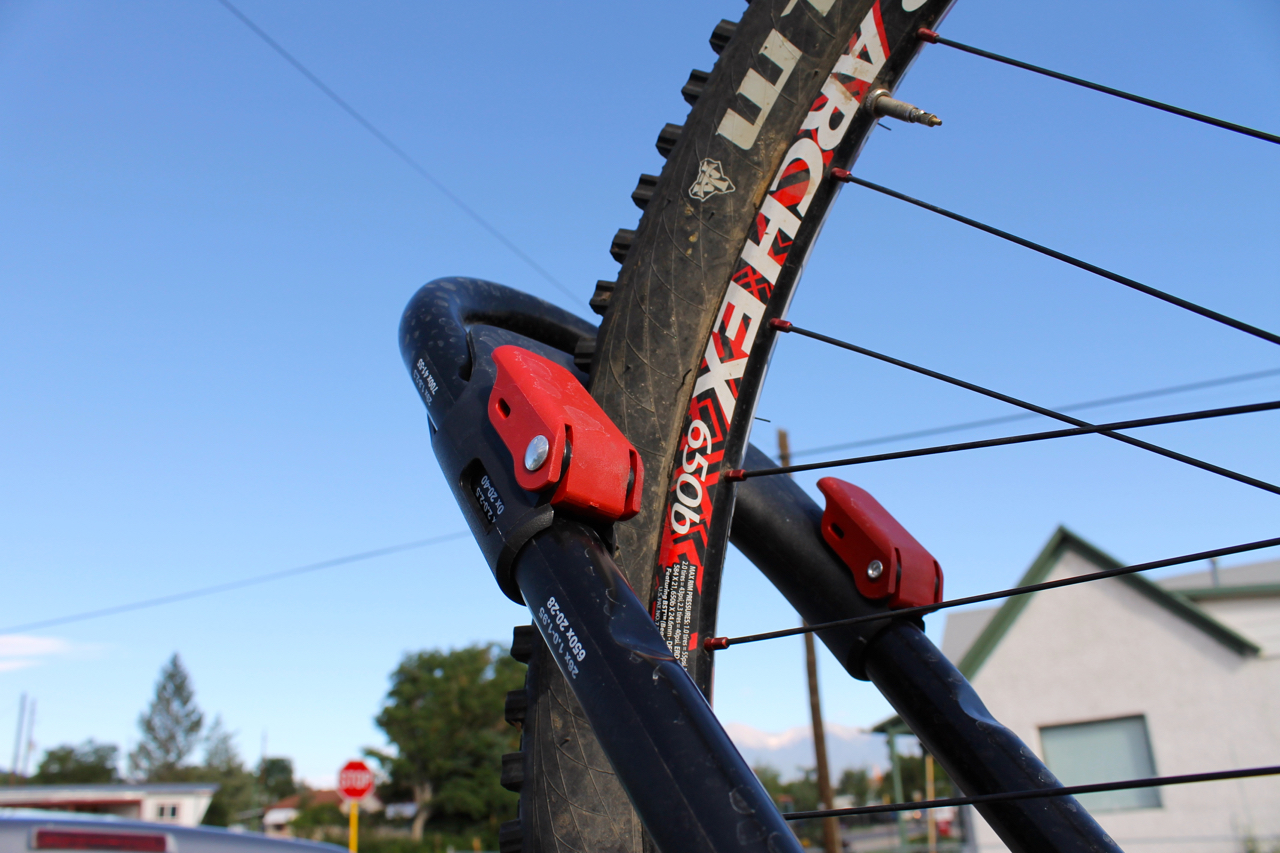 Once you do reach pavement again, it’s a good idea to get out and check that red dial. After a lot of bouncing down backroads that dial can loosen up a bit, so just throw a few more twists in it to tighten it back down. Over the course of my test I found this to be less of an issue if I made doubly sure to pull the wheel tight into the front of the rack during the initial bike install (as mentioned above), but it’s not a bad idea to double check the tension on the red knob now and again.

You have to do it less frequently, but it’s a good idea to check the tension of the tray on the crossbars every now and then as well. During my initial tray install I found that I didn’t tighten them down quite enough, so the trays were sliding around a bit on the crossbars. They would never have come off, but for added security I’ve cranked they down as hard as possible, and have had no further issues with them. 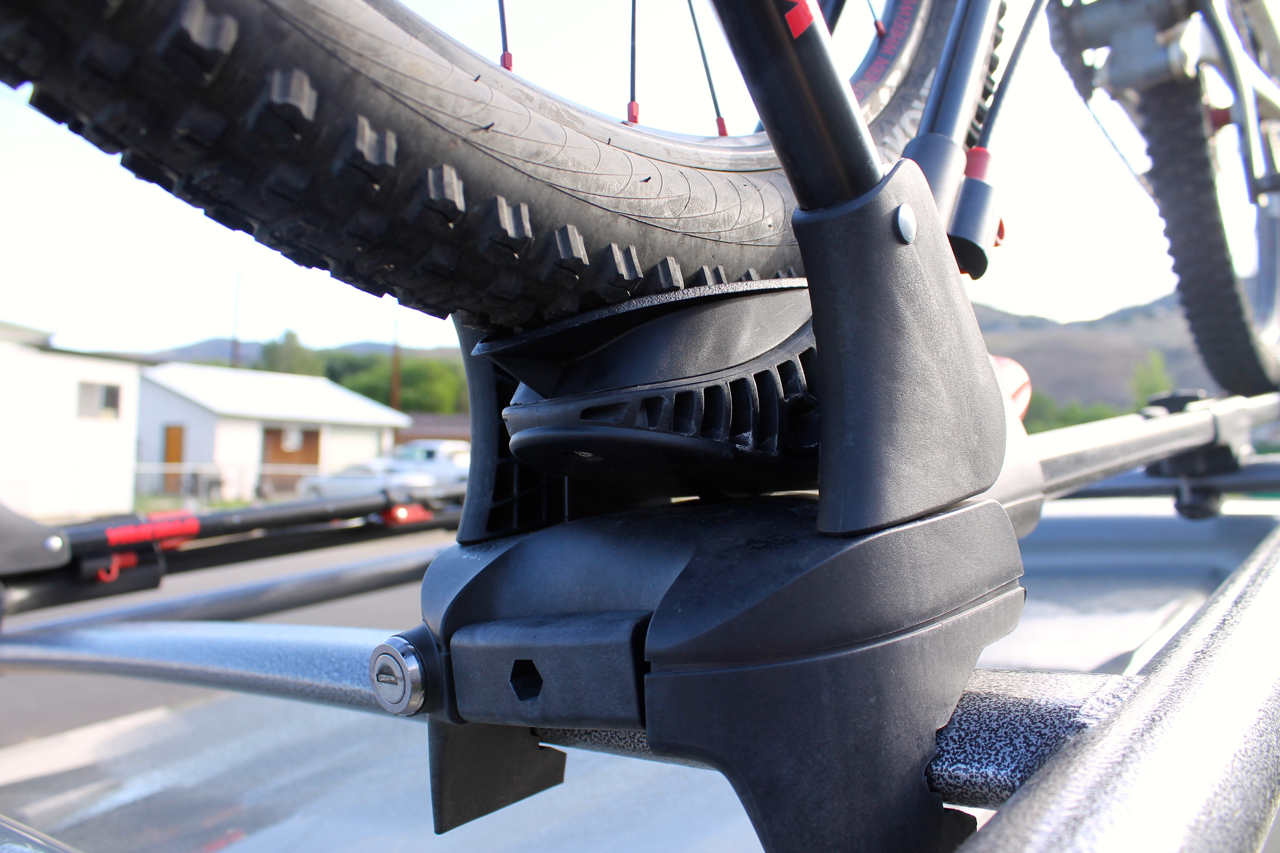 The FrontLoader is a genius tray design that removes all of the headaches that I’ve previously associated with bike transport trays. Forget about compatibility issues. Forget about removing wheels. Forget about making sure it fits your bike. The FrontLoader just works, and Yakima’s quality construction ensures that it’ll just keep working for years to come!

Thanks to Yakima for providing the FrontLoader for review

I’ve had these on my car for a few years and they’ve been great! As you mentioned, once you get the process down, it takes no time to load your bike. Not having to make space for muddy wheels inside the car is a huge plus. The bikes do move around a lot in the wind or at highway speeds, but I haven’t had any issues with the knob coming loose.

Actually, this rack is great for fat bikes. I use it all the time with Surly Nates – 26 x 3.8. I just use a webbing quick cinch strap and cinch both front and rear tire to the rack. It’s pretty much impossible for that to go anywhere.