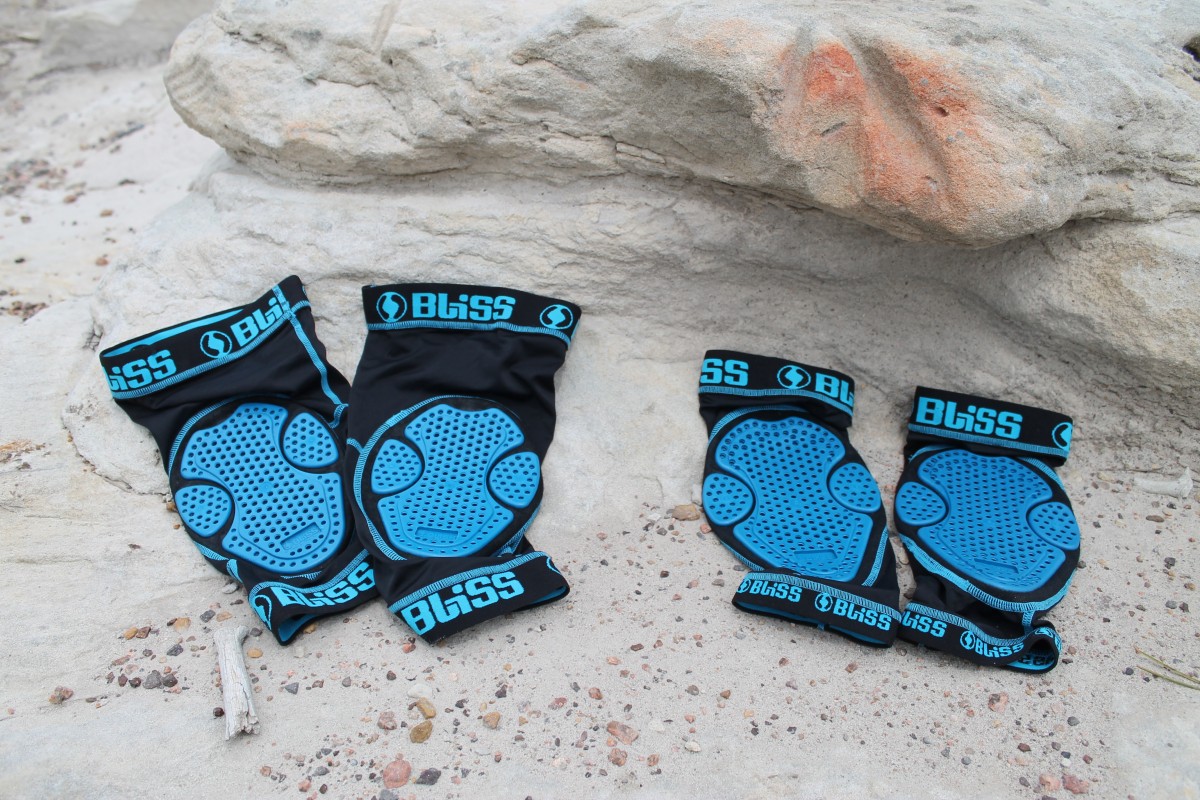 Of all avid cyclists, the percentage who ride with protection (beyond a standard helmet) is pretty low. Many of us don’t regularly ride terrain that really demands pads, and for those of us who do, the inconvenience simply outweighs the benefit gained. That’s all assuming we don’t crash badly, in which case we will probably wish we had been wearing a little something extra, especially on the exposed joints which tend to take the brunt of our falls: knees and elbows. 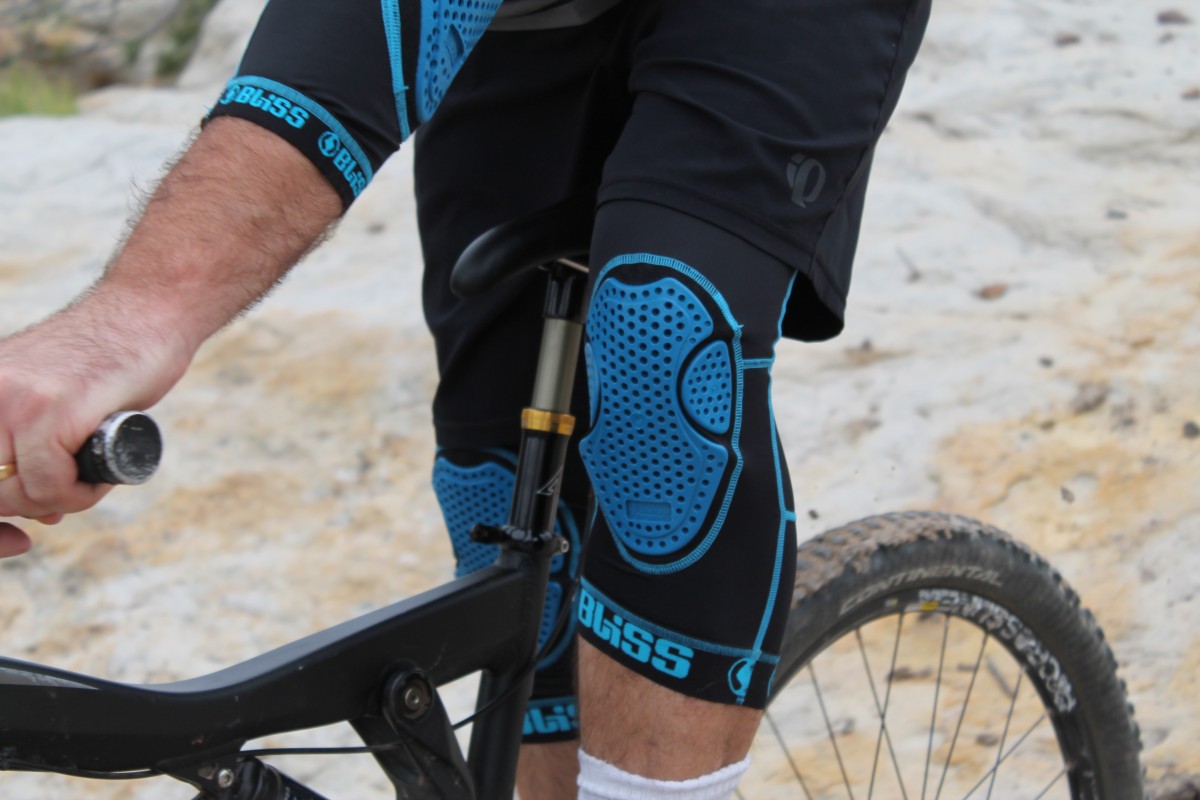 Bliss seeks to reduce the resistance to armoring up by making lightweight, flexible, and breathable protective gear, and the ARG Minimalist Knee and Elbow pads are the most extreme manifestation of that philosophy.  At the point of possible impact, the bliss pads are anchored by a patented substance called Armourgel , which absorbs and spreads the sudden mechanical shock of a hard impact.  The ability of Armourgel to spread the load allows the actual padding to be laid on very thinly.

While hard-shelled armor can also be thin, it is inflexible, making riding more difficult.  The Armourgel offers the best of both worlds, allowing for both thin construction and a pad that is anatomically fitted and flexible. Unlike hard-shelled pads whose integrity may be compromised by a hard impact, the Armourgel returns to its original state after absorbing an impact, theoretically making them able to absorb impact after impact after impact without compromising safety.  Bliss also claims that the Armourgel may be washed up to 50 times with no loss of safety performance. 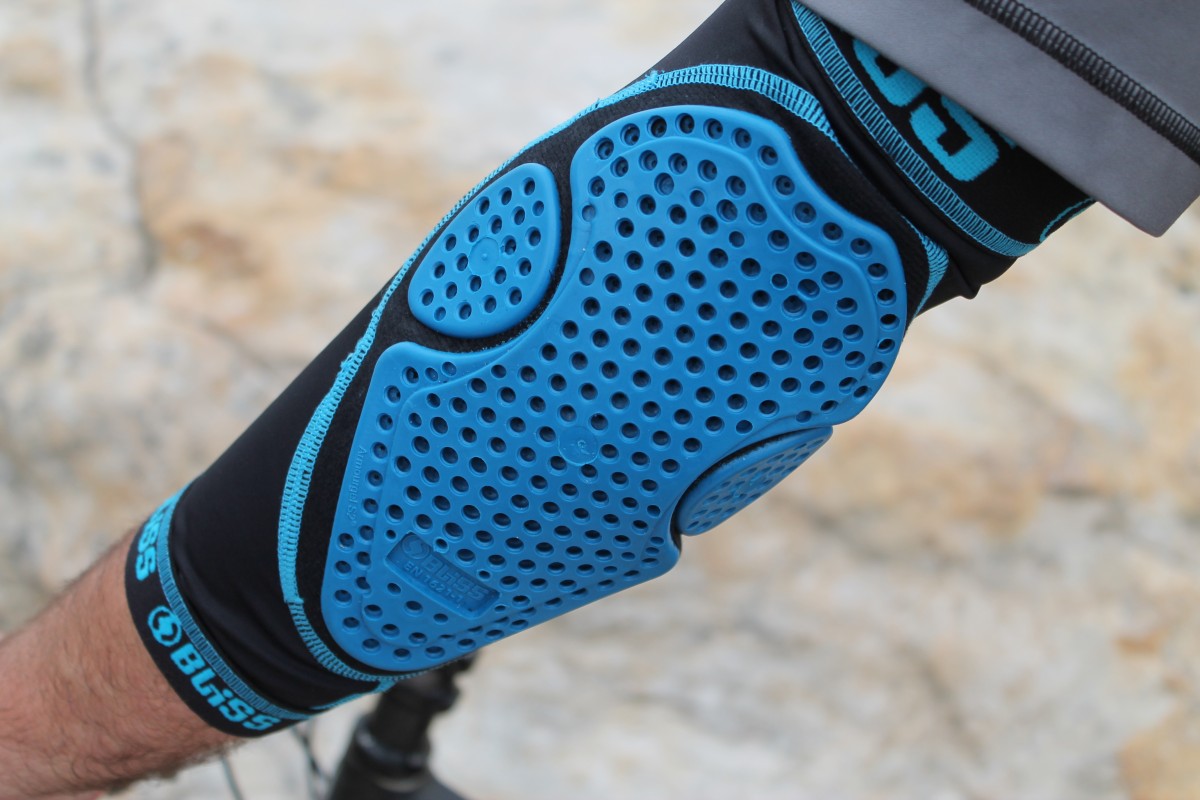 When I received the ARG Minimalist pads, I was impressed by the lack of heft.  They were indeed small and light.  The next test came in putting them on.  They went on easily, yet seemed to grip well, but I did find the sizing to be a little suspect.

First, in ordering them, I had a hard time selecting a size.  For the knee pads, the chart shows both a calf and a thigh measurement, but does not specifically say where on the calf and thigh to take the measurement.  (The chart is in centimeters, so hopefully your tape measure has cm on it–if not, multiply inches by 2.54 to get your measurements in cm.)  Looking at the picture of the pads, I could see where they contacted each muscle, so that’s where I took my measurement.  However, my thigh and calf measurement indicated a difference in size–two whole degrees.  I didn’t want to go small, fearing an uncomfortable, constricting pad, but I didn’t want to go too large, fearing slippage.  In the end, I ordered the larger size, which proved to be the right choice.  My knee pads slid on perfectly and gripped well at both ends without constricting.  The elbow pads, for which both measurements (forearm and bicep) matched nicely, ended being up a tad tight; if you’re near a size break on the chart, I definitely recommend going with the larger size.

On the trail, the Bliss pads rode every bit as comfortably as their light weight and flexibility would indicate they should.  When pedaling long distances, even uphill, while I wouldn’t go so far as to say I forgot I was wearing pads, I will say I never lamented the fact that I was wearing pads, nor did I feel the urge to stop and take them off.  If I had, however, it wouldn’t have been a big deal, as the pads slide on and off without fuss and there’s no adjustments to make.  What’s more, being so slight, they slide easily into any moderate-sized hydration pack, so there’s no reason to leave them at home if you think you might encounter some gnar on your next cross-country ride.

Over all rides, from fast-pedaling cross country efforts, to gnar-strewn tech fests, the pads stayed securely in place from end to end, thanks in part to the small bumps circumventing each cuff. Amazingly, this extra grippage was not accompanied by any discomfort.

For a sweathog like me, the best surprise was how well the material wicked and vented, preventing overheating and the discomfort which usually comes with sweating in pads.  My only remaining concern is whether something this light and slight will endure, but so far there have been no problems in the durability department. 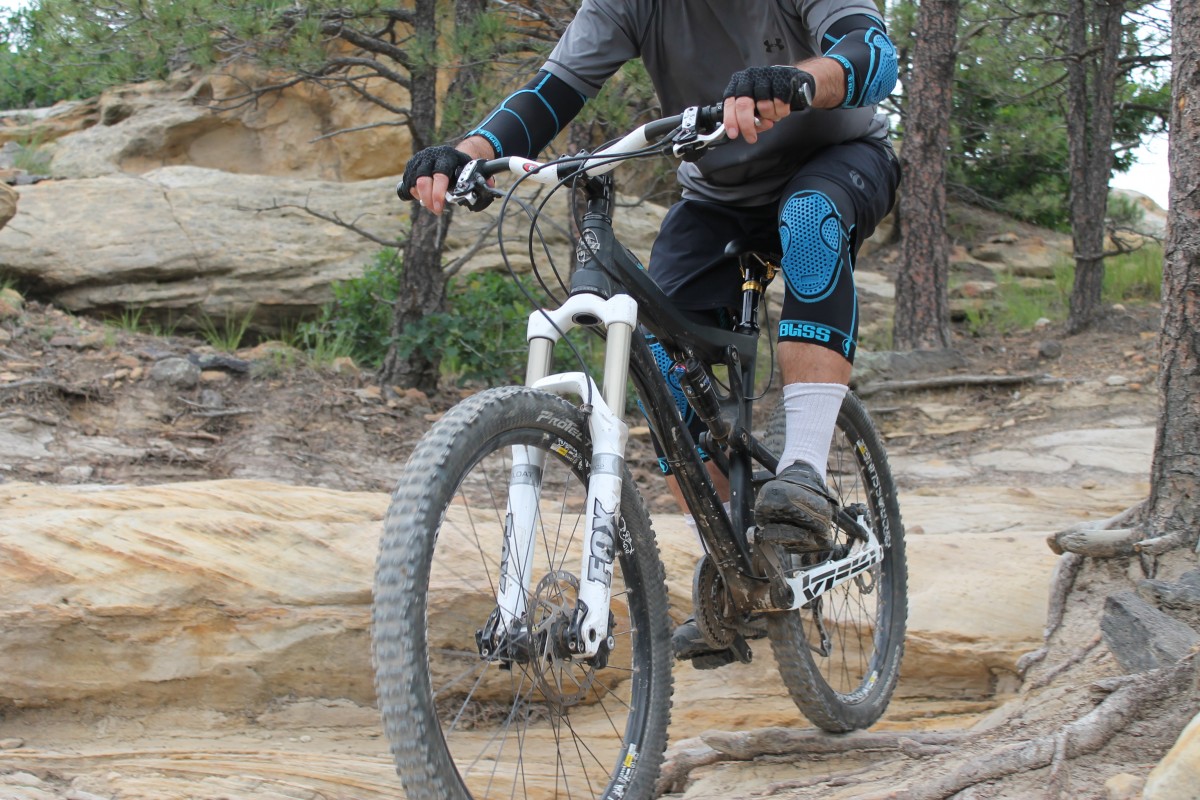 Very early in my mountain biking career, I was intimidated by a few obstacles at one of my local rides. I eventually conquered them by picking up a set of hard-molded pads and then hitting these drops and rollers without fear.  It turns out they were well within my technical ability and the pads were really nothing more than a placebo. I then put them in my “probably won’t ever use again” parts box where they’ve been gathering dust ever since.  That was a dozen years ago and, since then, I’ve a few trips to the ER for stitches which would have been avoidable had I been wearing protection. Now that I have these soft, lightweight, comfortable pads, I’ll never again have the excuse that pads are too much trouble to bring along on my rides.  Additional confidence and protection without the fuss; what more could I want for $60 a pop?

Thanks to Bliss for providing these pads for review.

John Fisch
I originally took up mountain biking in 2000 at the age of 35 because I spent all summer whining that I couldn't ski. However, the addiction soon took over and I now ride knobbies much more than I ride sticks. I'm a classic short attention span kind of guy and would generally ride an average trail for the first time than a great trail for the second time, and I will take every opportunity I can, short of ignoring the commitments of my family and day job, to seek out new trails, which is why my trails ridden list is so long.