Yo, you got a light?

It’s that time of year again! In just a few short weeks it will be too dark for most people to ride after work. Instead of sitting on the couch packing on the pounds, consider getting a light and hitting the trail at night. It’s a whole new experience to slice through the woods at night, which can turn an otherwise familiar (or even boring) trail into a chilly blast.

There are lots of lights on the market today, and it is an incredibly difficult decision to choose the right light for the way you ride. Like most things in life, you get what you pay for. Cheap, dim lights can get you hurt. Expensive lights can get you divorced. The trick is getting the most bang for your buck, and one that is light enough and convenient enough that you will put it in your pack and not leave it behind because it’s dead weight. Jet Lites has set out to strike the perfect balance.

The Deets (from Jet Lights)

The new F-Light, the F3, has the same bombproof form factor, the same ride-replaceable Lithium Ion battery and mounting options as the F-U2, with 20% more lumens with the same power consumption. Blast your pals on local club rides, or power all night at 24 hour races, or just see and be seen on donut runs to the corner store. We engineered this light with high-grade electronics, CREE LED technology, and Panasonic Li-Ion cells built to our specs. It’s the best in its class, offering riders a wire-free light built for the long haul.

What it’s made of:

The F3 comes with a light that resembles a high quality mil-spec flashlight you might mount on assault rifle (In fact, I challenge Jet Lites to make a picatinny rail adapter for this rig and tap into a whole different market). A mount is bolted on the body which easily attaches to a soft, adjustable helmet mount. It only mounts one way and it holds it really snug. It is constructed of a high-grade aluminum with a cap that unscrews to insert a small but potent Li-ion battery. It also comes with a separate charger for the battery, and of course, an AC battery cord. There was no soft or hard case included.

The first time I took this light out “just in case” I was really glad that I did. I rode the popular Lair O’ the Bear trail near Denver in the late afternoon with a large group. Rides with the posse not only take longer, they tend to present a lot more mechanical issues during what would normally be a quick after work ride. This ride was no exception. We ran out of light fast on the descent back to the parking lot, and then it started to rain. The F3 was a snap to attach to my helmet, and was bright enough to descend with confidence down a slick, sketchy trail. It held up superbly in the cool downpour, and I never worried that it was ruined due to the moisture.

I also tested it several times on local trails by myself. I found that the light is very bright at 15-20 feet, and gets a little dimmer at about 25-30 feet. Still, I found it bright enough to light up the singletrack in front of me even when my top speeds reached more than 20mph. Like many riders, for some reason I charge harder in the dark, and a bright light is a must. Nevertheless, I was also able to illuminate the local wildlife with it, including a 10 point buck and a pack of coyotes that were freaking me out a little riding solo in the dark. I’ll never forget shining the F3 at them and seeing several pairs of green eyes peering back at me–their quarreling abruptly stopped because this thing is bright!

As a side note, this light also doubles well as a general-purpose flashlight at camp, or for looking for bunnies with you kids to make them happy. FYI bunnies don’t like bright lights shining at them, either. The F3 does get warm if you are holding it like a flashlight, and I personally would not use it like this much since it was probably designed to stay cool while riding 10-25mph. It’s hard to say how long you can use a super bright CREE LED before it starts to melt from the massive heat it produces.

Forget how pretty and well made it is, how well does it work out on the trail? The answer is: great. Here are some shots I took at three different distances.

I have owned several light systems over the years, some with considerable firepower. One thing that stands out about the F3 is that it is light and easy to use. The battery seems to hold a charge for a long time, which makes it easy to keep it in my bag for weeks and not worry if it is charged or not. I have no idea how long it lasts. On all of my rides lasting 60-90 minutes, it still had plenty of juice. The small size and weight makes it even easier to throw in my pack for late afternoon rides, just in case I decide to ride into the night or have an unexpected mechanical. The unit feels like it is made of really high quality materials, and removing the battery to charge it is a snap.

Some users may not like the fact that you cannot simply connect a charging cable to the F3 itself, but instead have to unscrew a cap to remove the battery, then place the battery in a separate charging unit. I feel your pain, but this process has distinct advantages. First, it allows you to have and charge more than one battery, which is great if you are planning to ride for long hours in the dark, such as an endurance race, without carrying a lot of extra lights. Second, if you own more than one battery, it lets you charge one (or more), while using the other. This is nice if you use it for commuting, and plan to ride after work. Third, it keeps the unit sealed, protecting it from the elements. Lastly, aside from the F-series lights, Jet Lights also makes more compact X-series lights. Lights can be combined as part of a complete light system. More details can be found at: http://jetlites.com/product/f3-f-lite-series/ 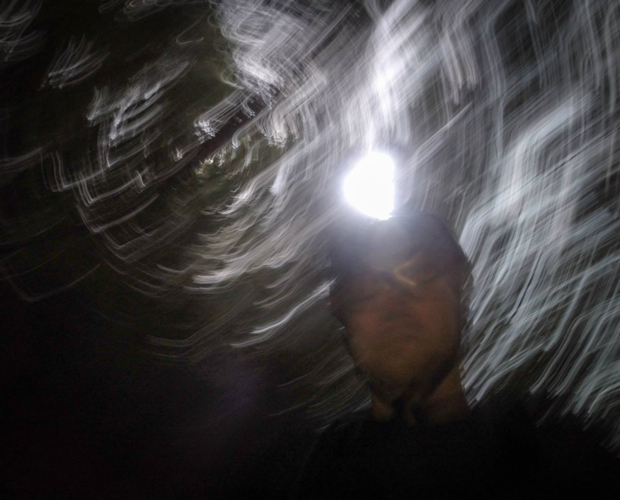 Thanks to Jet Lites for providing the F3 for review.

Michael Paul
Paul stumbled upon mountain biking in his twenties after upgrading his rigid purple Roadmaster to a shiny yellow Cannondale Super V900 . He resides in central Colorado, where he preaches the gospel of the (true) fat tire and he's been known to ride excessive amounts of wheelies. He is known for being surly, is opinionated, delights in run on sentences, and probably doesn't care what you think. He believes in following the rules. He frowns on people who don't do the right thing, or people who take themselves too seriously. His biggest pet peeve are Subarus that creep along slowly in the left lane. His best conversations are often with himself. When he is not riding, he appreciates exotic espresso, craft libations, Led Zeppelin, and making excuses. He's been known to jump out of perfectly good aircraft and pet sharks underwater (simultaneously). His fat bike is more prepared for the zombie apocalypse than you are. When he is not trying to be funny, Paul also likes traveling the world, photography, being a dad, and chronicling his crotchety shenanigans. Platypus. That is all.