I’ve long been intrigued by Mondraker’s bikes, but until recently, I had to admire them from afar. That’s because the Spanish brand didn’t sell their bikes in the United States. Late last year, however, Mondraker announced a partnership with Colorado-based QARV Imports to distribute their bikes here.

One of the models being brought to the US is the Dune, which Mondraker classifies as a “Super Enduro” bike. I’m not sure entirely sure what that means, besides an effort to differentiate the 160mm-travel Dune from it’s slightly smaller brother, the 150mm Foxy. There are five models of the Dune: two aluminum and three carbon. I tested the Dune Carbon RR, which sits in the middle of the carbon line.

With its unique frame design and a bright magenta and highlighter yellow paint job (not unlike the 2016 Santa Cruz Bronson), the Mondraker turned heads wherever I went. I test lots of interesting bikes, so I’m used to fielding questions from strangers, but there was more curiosity about the Dune than any bike before. People who had never heard of Mondraker just had to ask, “What is that?” 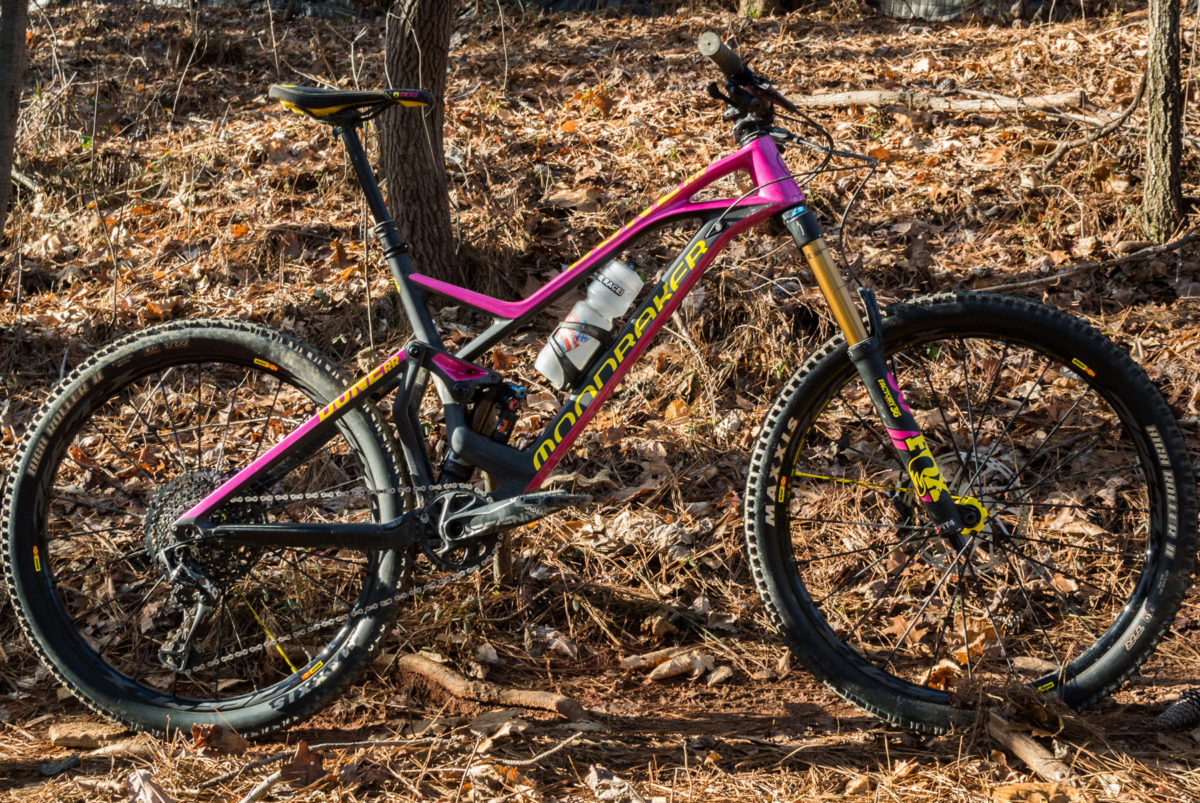 Mondraker was a pioneer of long and slack geometry — I omit “low” because they’ve kept their bottom brackets at reasonable heights. Their “Forward Geometry” concept builds all frame sizes around a stubby 30mm stem and really long reaches.

Try a reach of 493mm on my size-large test bike. That’s nearly 20mm longer than bikes like the Whyte G-170, the Transition Patrol, and the Kona Process, all of which are long by today’s standards. Throw in a 170mm-travel fork and a 66° head tube angle, and a large Dune has a wheelbase that surpasses a large Santa Cruz V10 downhill bike. In fact, it’s nearly as long as an extra large V10.

Other top-line geometry numbers include a steep 74.7° seat tube angle and a relatively high 350mm BB. In case you want to make the Dune even longer and slacker, the head tube angle is adjustable by 1° and the chainstays by 10mm.

The full carbon frame Dune RR might be in the middle of the carbon offerings, but it is by no means a mid-range bike. It sports Kashima-coated Fox suspension at both ends: a 170mm-travel Fox 36 fork and a Float X2 rear shock. The drivetrain is a mix of SRAM Eagle groups with an X01 rear derailleur, a GX shifter and cassette, and an alloy Descendant crankset with a 34T chainring. Brakes are SRAM Guide R with a 200mm front rotor and a 180mm rear.

Mondraker’s website lists the wheelset as the Mavic XA Elite, but my particular tester came with Mavic’s Deemax Pro wheels. Considering the intentions of the Dune, the Deemax are a better choice. Mavic remains conservative with their rim widths at 28mm internal front and 25mm rear, but the benefit to that is a wheelset that weighs just 1,700g. Maxxis High Roller II tires are spec’d front and rear in a 2.3″ width.

A 150mm Fox Transfer dropper post, an SDG saddle, and an Onoff Stoic stem, carbon handlebar, and grips complete the build. Without pedals, the Dune came in at 29lbs — fairly impressive for a bike of this stature. Of course, a bike this nice is gonna cost a pretty penny — in this case, around $7,800.

Testing the Mondraker Dune on the Trail

I have to admit that I was a little worried about testing the Mondraker Dune here in Georgia. Would it simply be too much bike for the terrain and therefore, rather boring to ride? The short answer is “no.”

Once I’d assembled the bike and made some baseline suspension settings, I took the Mondraker to a familiar neighborhood trail for a shakedown ride. This trail network makes use of every square foot of land available, packing a surprising amount of trail into a relatively small area. The trail folds tightly back over on itself time and again as if riding a digestive tract. There are few opportunities for sustained speed with so many turns. I expected the Mondraker to feel plodding and barge-like, but that just wasn’t the case.

The Dune proved efficient and sprightly at the pedals, particularly when seated — pedaling while standing reveals a bit of bob from the rear suspension, but nothing undue. With a smooth pedal stroke, the Dune rode like a bike with much less travel. Part of the snappy feeling is owed to the light and stiff Mavic wheels. They’re quick to spin up and have that classic, precise Mavic feel. The Deemax wheels may not be the widest around, but it’s hard to knock anything else about them. Despite stretching out like a limo, the Dune is agile on its feet.

The more I rode the Dune, the more I liked it. Even though it had more travel than absolutely necessary, I chose to take the Dune on all-day rides. Its efficient pedaling platform and relatively light weight didn’t hold me back on the climbs, but the suspension and geometry provided a tenacious ride quality on the descents.

I even had the opportunity to ride the Dune at the Windrock Bike Park in Oliver Springs, Tennessee. The runs there are short… but insanely steep! That probably has something to do with who runs the park and builds the trails — World Cup Downhill racer Neko Mulally. Throw in the freeze/thaw conditions we were experiencing and it would be a tough day on any bike. After a couple runs I acclimated to the steepness of the trails, let off the brakes, and started to trust the bike more. At speed, the Dune’s sprawling wheelbase provided stability well beyond your typical trail or enduro bike. If I were riding the Dune in a bike park regularly I would definitely upgrade the tires to a grippier compound and look at installing more powerful brakes.

One final thing to note about the Dune is just how quiet it is out on the trail. It sports a dual-link suspension platform so there are ample opportunities for creaks to develop, but the Dune was silent. Home mechanics will also be happy to hear that Mondraker uses a threaded bottom bracket, which is quieter and easier to maintain than its press fit counterpart.

At 6 feet tall with longish arms, I’m firmly in large territory according to Mondraker’s size chart. I was comfortable on the Dune, but I did have to slide the saddle just about as far forward as it would go. A medium Dune has a reach of 472mm which is more in line with my personal bikes. I’d be interested to see how I felt going with one size smaller frame. I appreciated the room to move around on descents — particularly at the bike park — but for everyday riding, I don’t think I need all that length. As always though, YMMV.

If you’re between sizes, I’d recommend sizing down unless you have a disproportionately long torso or arms.

Notes on Components and Frame

Overall, the build is quite good, but I have a few suggestions (and gripes): 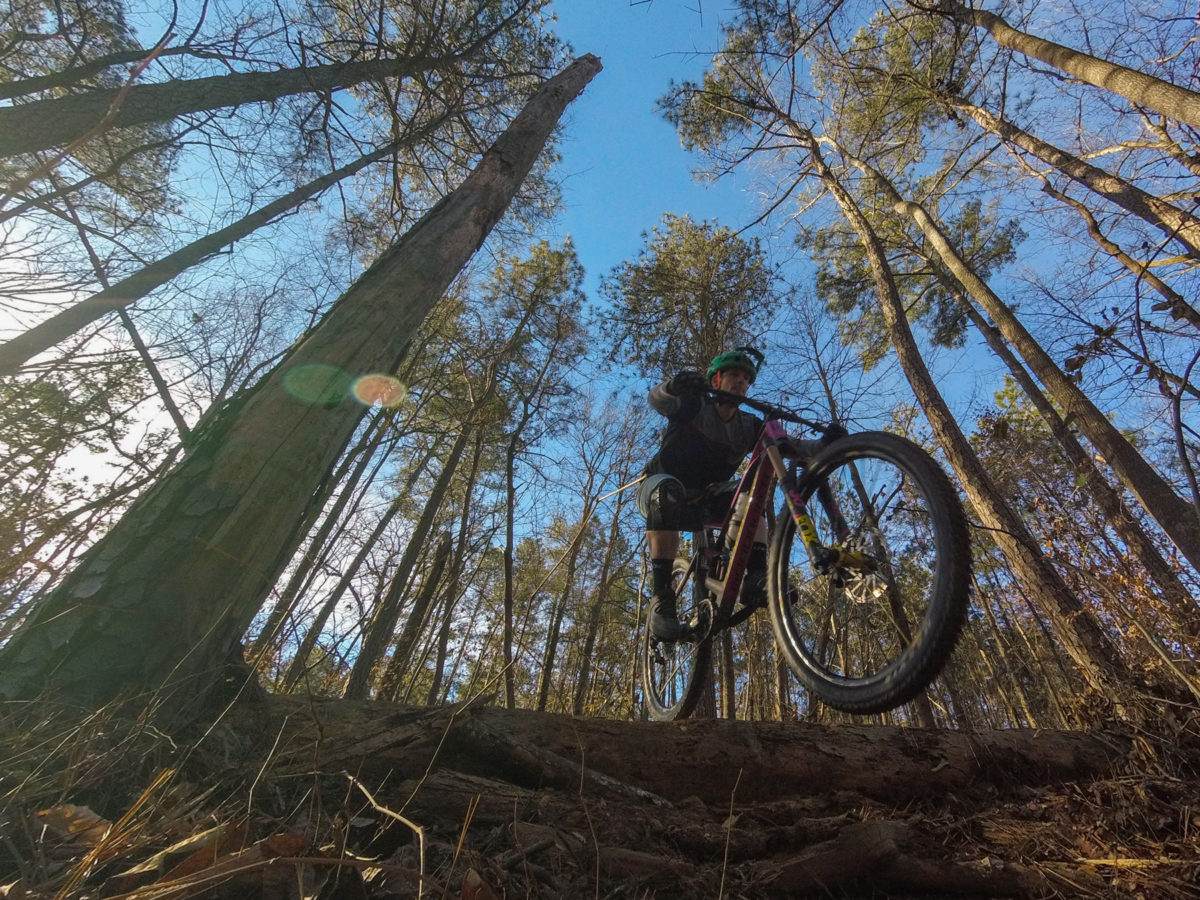 As much as I like the Mondraker Dune RR — and I truly enjoyed the bike — I think it’s currently overpriced. There are some head-scratching decisions in the spec as I detailed above, and frankly, there are some glaring omissions for a nearly $8,000 bike. Chief among those are a set of wide, carbon fiber wheels, the best rubber available, and a higher end drivetrain. Personally, I don’t give two shits about carbon rims or the fanciest shifter and derailleur, but if I dropped this much cash on a bike they would be requirements. Compared to similar offerings from boutique brands like the Ibis Mojo HD4, the Santa Cruz Nomad, and even the Yeti SB6, the Dune doesn’t offer the same level of components for the money. Looking at enduro bikes from more mainstream brands like Specialized, Trek, and Giant, the gulf is even wider.

It’s relative lack of value is a shame because the Dune is one of the most unique, surprising, and best-riding bikes I’ve had the pleasure of testing. Unlike many long-travel bikes, it’s not pigeon-holed for use solely on extreme terrain. No matter what trail I took the Dune on, I enjoyed the ride. Cruising along smooth trails, the Dune pedaled with the efficiency of a 120mm bike, but throw it down something properly steep and it became an entirely different beast. There are few bikes out there that can make that claim.

Thanks to Mondraker for lending us the Dune RR for review.