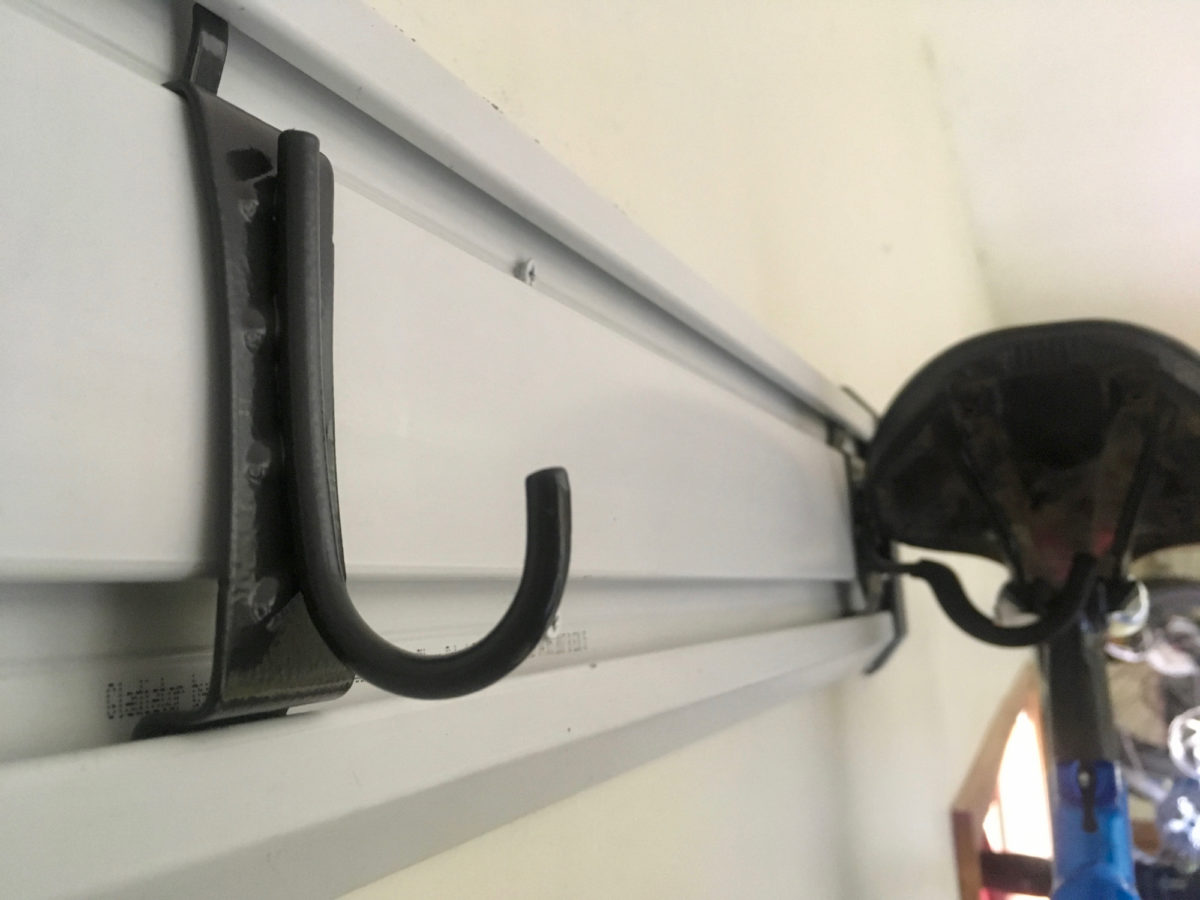 The Gladiator Bike GearTrack Pack from Whirlpool is a storage system designed to hold bikes and other gear by capitalizing on empty wall space. The channel system, shown above, holds up to 75lbs per linear foot when properly installed, and the standard GearTrack pack channel is 4 feet long. That’s a total capacity of 300lbs, which is more than enough for a few measly bikes.

The basic system works like this: the GearTrack is mounted to the wall. Once mounted, any number of assorted hooks and accessories can be attached to the track to store a variety of gear. The $50 Bike GearTrack Pack comes with attachments designed for bike owners: a Gladiator Claw™ Advanced Bike Storage Hook (more on this later), a Vertical Bike Hook, and two J Hooks, plus the mounting hardware.

To optimize available wall space to the max, 8-foot strips of the GearTrack Channels offer double the length and storage, while GearWall Panels are available to line walls from floor to ceiling. But in practice, just one 4-foot track should free up a substantial amount of garage floor space.

I’m not known for my handyman skills, and initially, I was nervous about installing the GearTrack. When I opened the instructions, I saw that the needed tools list called for a jigsaw and an AC finder, neither of which I owned.

While I found that I didn’t actually need a jigsaw or an AC finder, one tool that’s mandatory for the job is a decent stud finder. The stud finder that came with my toolkit wasn’t up to the task, so I invested about $25 in a new one.

While detailed instructions are included in the package, here’s the basic process.

I found that by combining two of the Gladiator Claws and two vertical bike hooks, I could easily store four bikes on one four-foot stretch of GearTrack. Note that while the pack only comes with one Gladiator Claw and one bike hook, additional Gladiator Claws are sold individually for $25 and Vertical Bike Hooks for $8. And of course, the Gladiator website offers plenty of other attachments for storing… well, just about anything. I could easily see investing in more GearTracks for storing non-bike gear in my garage. 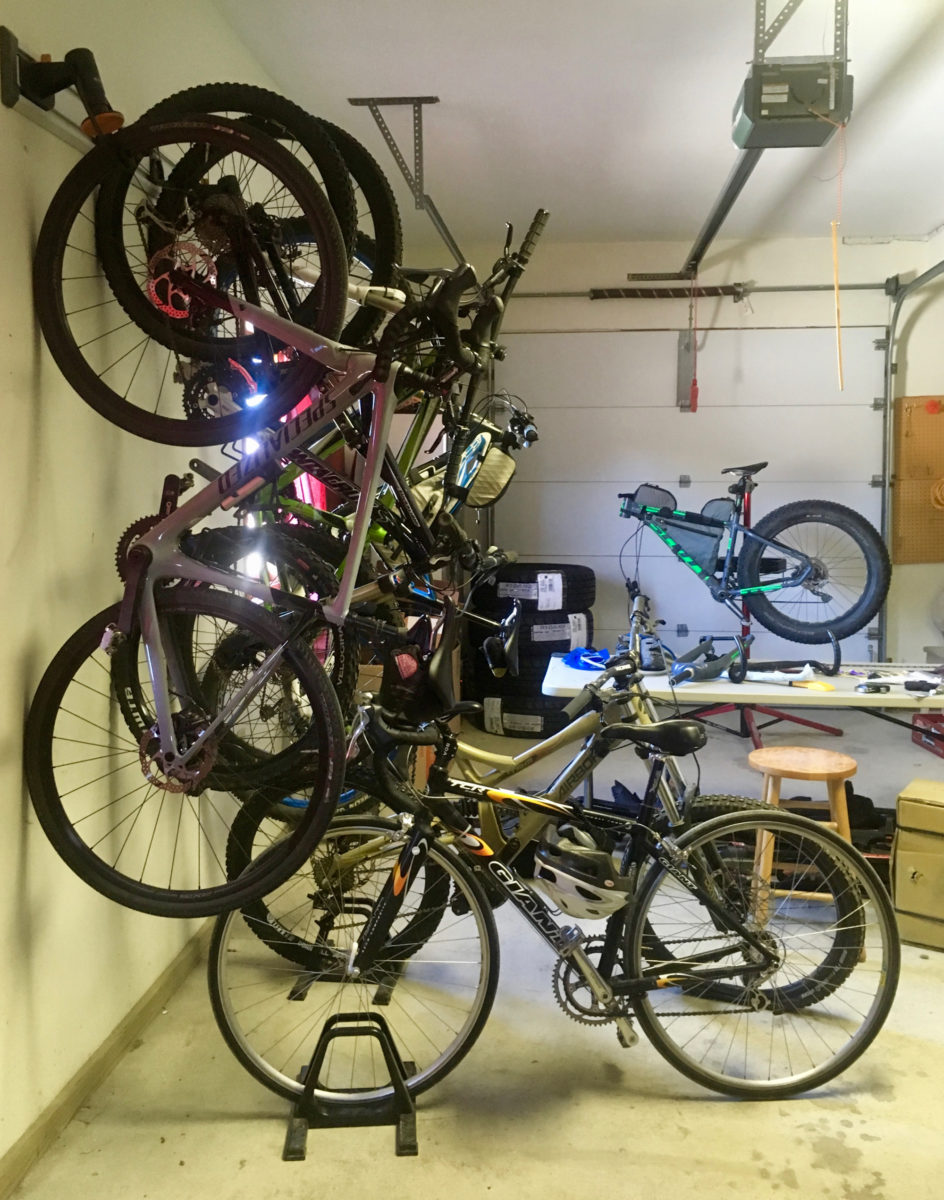 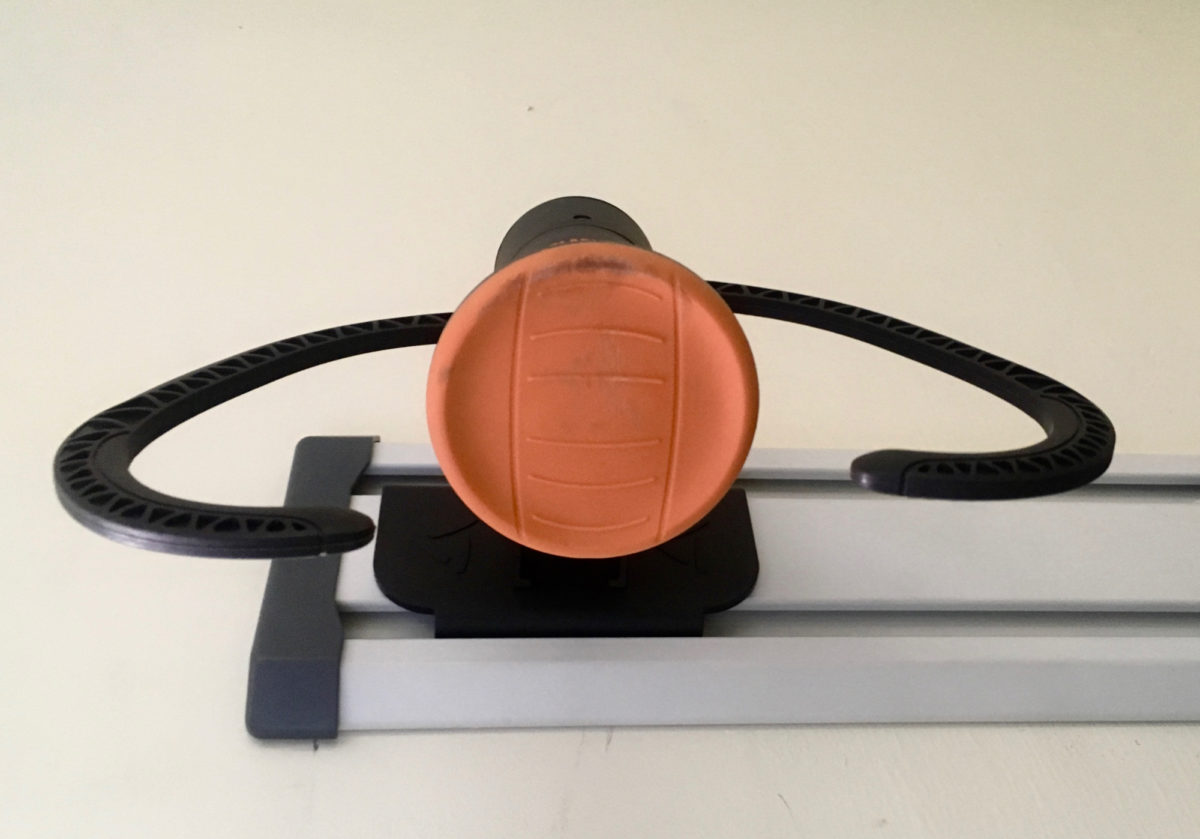 In my opinion, when the Claw works, the convenience is worth way more than the $25 price per Claw. It’s simple, quick, and just about anyone can use it without having to muscle the bike around too much. It’s also rated for up to 50lbs of weight–way more than any reasonable mountain bike.

Unfortunately, the Gladiator Claw is only designed for tires 2.4″ and narrower. And in actual practice, I found it to struggle even with 2.35″ 29er tires. While the width of the tire plays a role, the total height of the tire plus rim must be short enough to fit inside the clamp. I found the claw to work superbly with road bikes, gravel bikes, and mountain bike tires up to 2.25″. I’m even able to close the claw around a 27.5×2.5″ tire on a modern enduro rim, but that requires manually pushing the two claws around the rim, which great reduces the convenience of the device.

That said, I asked GearTrack about this compatibility issue, and they claim to have a new version of the Claw in development for use with up to 3.0″ tires. Based on my use of the Claw, simply changing the form factor of the claw ends will be enough to clear modern mountain bike tires, so stay tuned for the updated version of the Gladiator Claw. 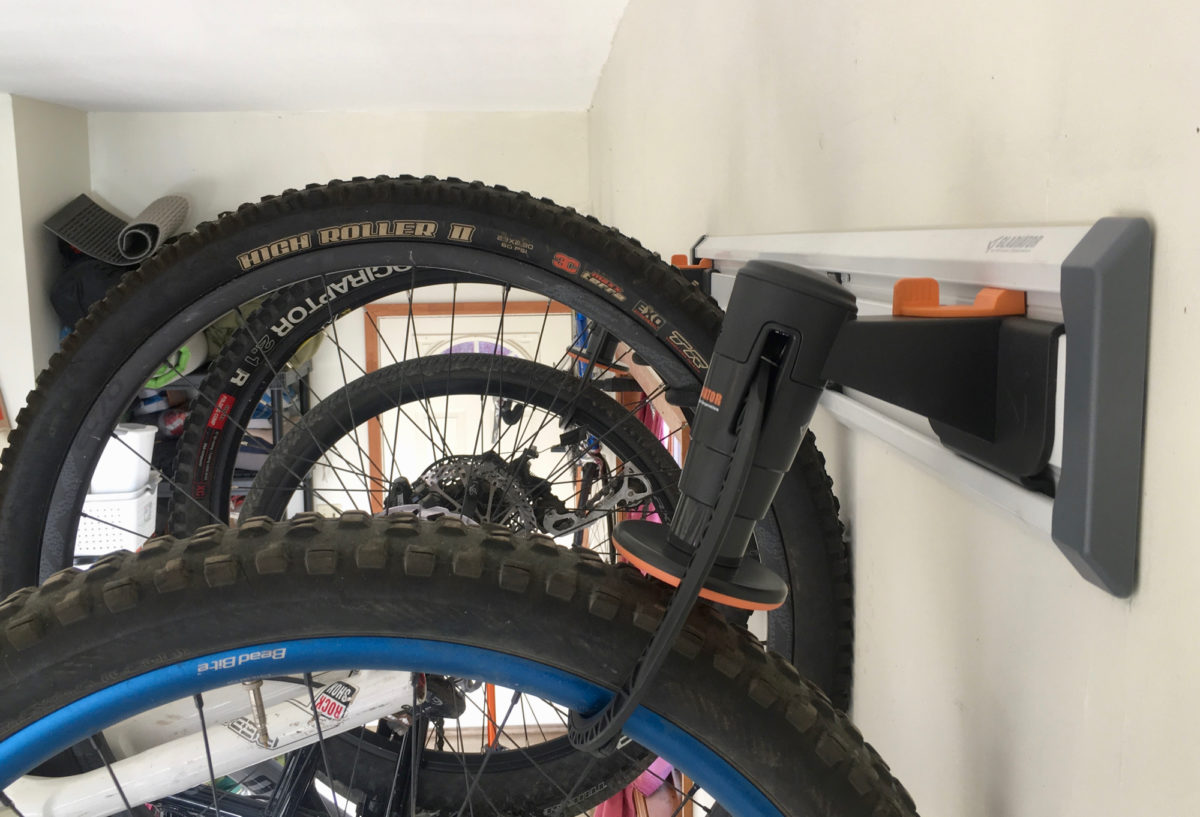 I didn’t even know the Gladiator GearTrack existed until recently, and now I’m wishing I had installed this system in my garage years ago. Just one GearTrack has radically condensed my bike storage, freeing up precious floor space and making it much easier to access my various bikes when the mood for a different type of riding strikes.

The bike-specific GearTrack Pack gives the rider everything they need to get started with bike storage, while additional GearTrack accessories further expand storage options.

Thanks to Gladiator for providing the GearTrack Pack for review.

FYI you can also find studs in the wall for free by knocking on the wall. If it sounds hollow, there’s no stud, and if it sounds solid there is a stud. Also, standard spacing for wall studs is 16 inches apart.

Sure, but if you want to ensure that the screw hits as close to the middle of the stud as possible, seems like it’s a good idea to take more exact measurements. If you’re hanging some hand tools from the track, that’s one thing. If you’re hanging 120lbs of mountain bikes that could be worth tens of thousands of dollars… seems like a little precision is warranted.

Good point Greg. I’ve never had much luck with stud finders myself, but to each his own.

Also I’m a cheapskate. Do you know how many tacos $25 can buy? A lot of tacos.

craZivn
Reply to  Head Over Handlebars

It’s actually pretty easy to home in on the center of the stud using the knocking method, your knocks will become more solid as you near the stud and then fade into hollowness as you pass it. Finding the center-point of the solid sound is pretty straightforward.

…And if you’re horrible at the stud-finding game and miss completely, the Geartrack will cover up the hole! 😀

The majority of homes have 16″ stud spacing, but garages may have 24″. I think that if you’re going to hang a bunch of bikes on it, mount a 2×6 between it and the wal using lag bolts. Then, mount your rail to the 2×6 for a little more secure hanging.

lol a stud finder will eliminate any problems