We tested four very good studded fat bike tires in Northern New England last winter, and the only time it sucked was when there wasn’t enough snow. If you’re into riding snowy singletrack but not sure about studs, this test could help narrow down if you really need some metal in your tread.

If all you ride in the wintertime is frozen dirt and impeccably groomed, dry, cold, hardpack powder, there’s a good chance you don’t need studs. But even in wintery places like Vermont and Minnesota, the snowy singletrack season is only 3-4 months, and if you aren’t riding when it’s icy, most years you’re not getting out a whole lot. And some years, you’re hardly getting out at all. Studded tires will carry you through freeze/thaw cycles with zero worries and a big smile. Icy trails are firm, fast, and fun with any of the studded tires in this roundup.

Our testing conditions were snowy, packed-in mountain bike trails – some groomed and some walked in from heavy foot traffic, sometimes bone-dry and grippy and sometimes glazed from freeze-thaw cycles. Despite intermittent icy conditions, this isn’t a glare-ice tire test, and we weren’t riding on frozen lakes or rivers.

All tires were set up tubeless using Bontrager’s TLR Tire Sealant, which worked great. The opaque blue color jumps right out at you, making it very apparent when the sealant is burping or weeping out, which is nice to know. A non-studded pair of Maxxis Minion DHRs was used as a control, and right off the bat, we have to admit they’re not at all bad in hardpacked, fresh-groomed, Velcro hero snow. And for a thin dusting of powder over frozen dirt, the non-studded tires are definitely the tool of choice. This is mostly because frozen dirt and studded tires don’t play nicely together (more on that below) and because frozen dirt offers terrific traction without studs. Seriously though, if you’re on the fence about studded tires for your fat bike and you live in a place that intermittently gets above freezing throughout the winter, just get them. You won’t regret it.

These are the tires we tested, in order of most interesting, which in this case maybe means saving the best for last.

More than any other tire in the test, Wrathlorde transformed our riding with its massive amount of traction, rolling resistance, and weight.

It rides slower on flats and easy-to-moderate uphills. But for any kind of downhill – and in many sub-optimal conditions – the Wrathlordes absolutely slay. Pair these things with platform pedals and a dropper post and get ready to get sideways for some flat track moto-style descending. These are not the best all-around tires in the test, but they are arguably the most interesting. If your trails have lots of vert and you’re not counting seconds on pedaling segments, you owe it to yourself to try out the Wrathlorde. If you’re about the same fitness level as your riding buddies and put on Wrathlordes, be prepared to check your ego for fast pedaling sections. It’s not unlike tagging along with a spandex XC crowd on a burly trail bike.

Who’s it for? Wrathlorde is a compelling option for anyone who rides a slower-climbing, ripping-descending enduro bike in the summer and wants to extend that vibe as much as possible into the winter. It’s also excellent for rugged trails that are only “groomed” by walkers and snowshoers. All studded tires are good for ice, but with 300 MAX TRACTION CONCAVE STUDS, the Wrathlorde is an extremely formidable ice tire.

Finally, it’s also terrific for anyone who is more concerned about not crashing than they are about anything else, including but not limited to those riders who are … nursing an injury, taking blood thinners, pregnant, fragile, new to fat biking, using a kid seat like the Mac Ride, really really into grabbing the front brake, prone to throwing off-putting temper tantrums if they ever have to dab or walk a section, or addicted to the two-wheel drift but not wanting to break their collar bone for a sixth time.

The 4.0 Cake Eaters roll along so smooth and fast on a well-groomed trail, they reminded us of riding on a road bike for the first time. Switching from the Wrathlorde to the Cake Eater 4.0 feels like going from an enduro rig to a XC race machine on semi-slicks. The Cake Eaters were hands-down faster than every other tire in the test and even sport slightly taller cornering knobs than the Bontrager Gnarwhal (see below).

We tested the 26×4.0″ flat-tip studded tire with a 33tpi casing. We tried to get the version with the 120tpi superlight casing and triple traction crown studs, but they were already sold out. The basic Cake Eaters tested here were amazing, so it would be interesting to see whether the higher-end version is a noticeable improvement or a case of diminishing returns. We will call these a “quiver tire” is because most testing was conducted in hilly, steep terrain, and the braking performance left us feeling less than full-send confident on steeper downhills.

While they totally held their own and lots of good days were had on them, both front and rear, the Cake Eaters broke into a skid more easily than the other tires in the test while descending at speed. However, if you live in flat to gently rolling terrain, that’s probably not going to be an issue.

Who’s it for? Speed demons, flatlanders, roadies, those who love skidding above all else, highly skilled (and durable) hill people seeking their next KOM.

Available at Amazon for about $200.

Smaller, lighter testers floated just fine on the 3.8 Gnarwhals, and larger testers thought they ripped on really firm hardpack. Heads up! Volume-wise, 3.8-inch tires are the minimum that most groomers want to see on their carefully manicured trail systems, and that’s assuming the conditions are firm and the rider isn’t in the Clydesdale category.

With the shortest, stiffest sidewall in the test, Gnarwhal feels super stable and planted while cornering, with very little of the bouncy sensation that tends to accompany big-volume tires running low pressures. The Gnarwhals are also toothier than they look, coming through with the little bit of extra traction that you need to make it up steep switchbacks.

Compared to the Cake Eater and Dillinger 5, you can feel that extra grip as rolling resistance when you’re just riding along, but they’re still a great deal faster than Wrathlordes, and they pay you back with upgraded braking and climbing traction when you really need it.

Who’s it for? Slight-of-build rippers who want the stiffer sidewall, lower weight, and decreased rolling resistance of a lower-volume tire and can get away with it without rutting up their local trails, causing lots of people to passive-aggressively post about them on area fat bike social media groups (because they will if you do, and you will deserve it).

Look around the trailhead on a snowy day, and you’re sure to see a lot of people running Dillingers. Or at least lots of Dillinger tracks. It’s pretty much a given. They grip on climbs better than it seems like they should for how smooth they roll. They float and keep rolling on softer days, and they brake and corner very capably on eye-watering fast descents, in part thanks to improved cornering knobs on the latest versions of the tire.

There are many versions of Dillingers. We tested the tanwall Dillinger 5, 26×4.6″, 60 tpi, with 258 concave carbide-tipped studs version. It weighs about 1565g on our scale and is priced at $220 MSRP. Available at JensonUSA and other online retailers.

Who’s it for? Those who gravitate toward blue-chip “best in test” kind of gear. Someone who just wants to ride packed and groomed trails all winter and not worry about ice or think about tires too much. Someone who wants to float over anything floatable, but still have grip on the glazed-up stuff. If you want to get weird, there are plenty of weird tires out there. If you want something trustworthy, proven and rock solid, this is the tire for you.

For example, grab a handful of rear brake and skid around a rooty, thinly covered corner with frozen dirt underneath, and those hard, high-traction surfaces will grab your studs and lever them right out of their happy little rubber stud pockets. Having extra studs and a tool that makes it easy to install them is a reasonable and relatively inexpensive countermeasure against occasional stud displacement. Stuff happens sometimes, and it’s not a big deal if you’re prepared for it.

It’s not just thinly covered trails you need to watch out for. Bontrager Marketing Manager Alex Applegate calls out pavement as the most challenging surface for studs. “Riding on dry pavement is toughest on studs,” said Applegate. “With no snow or ice to bite into, all the force and feedback from that unforgiving dry pavement goes directly into the stud, which can displace them. Not a huge deal though as they are easily replaceable, especially with the proper tool.”

The 45nrth team advises riders to really think about their riding conditions and style before choosing a particular studded tire. “Selecting different studs for different use cases is something we’re still learning about as an industry,” said Zane Bushey, 45nrth brand product manager. “We have three different stud geometries, and they all use the same stud pocket. Those XL studs have more surface area and more traction, but that can also create more force on the stud pocket.” In other words, if you’re flirting with thin cover and frozen dirt often and concerned about stud loss, you may be better off with standard flat-head studs as opposed to some of higher-traction options now being offered. That said, you might still find yourself replacing some studs.

“Any time you feel yourself skidding on a hard surface, that’s a good time to look out for some displacement and make sure your studs are all the way bedded into the tire,” said 45nrth Brand Marketing Manager Stephen Wilcox.

“Studs are amazing,” said Applegate (and he’s right). “When you need them they can transform what is possible. Especially after a freeze/thaw cycle, and if you are only riding on packed trail there isn’t really a downside. They give you more traction when you need it and can make otherwise unrideable conditions super fun.”

4″ tires are my go-to tires for ice and snow. Most of my winter riding is on groomed snow trails and/or well worn icy trails. (winters in my area are freeze/thaw ones). I find that a 5″ studded tire does not bite as well as the 4″. And a shout out to my Vee Rubber Avalanche studded tires (26×4) which I find superior to my other set of studded tires. (Dillinger 4’s) 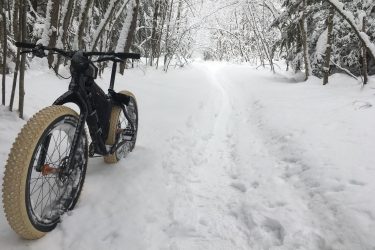 I ride in Vermont and rain events are not uncommon, unfortunately. Hitting a patch of ice without studs can put you down really fast, whereas with studs it is more like riding on soft dirt. A camoflaged ice patch with a thin layer of snow on top is nearly impossible to cross safely without studs, but no problem with them.

I typically run the 4.5″ studded Gnarwhals both front and rear and they are great. I have tried the studded Dillinger D5 in the rear and while it is OK for straight ahead traction, it slides side to side like crazy if there is any soft/loose snow.