Everyone, it seems, loves video of their ride, and the current gold standard for video is 4K, even if certain technical writers have called 4K a “dismal failure” of 2015. Whether you agree or not about the state of viewing 4K video, I think we can all agree that if you want to sell an action camera, it needs to say 4K on the box… nevermind that most of the video we’re talking about is being watched on a mobile device or in a browser window that’s more like zero point 4K resolution.

The best known name in the game is GoPro, with Garmin’s offerings catching up fast. But if you’re looking at either of those, you might be looking at up to $500 for the camera.

Our friends from China have sent us another option, the Firefly 6s, which sells for around $130. Here it is. Certainly looks like a GoPro, doesn’t it? 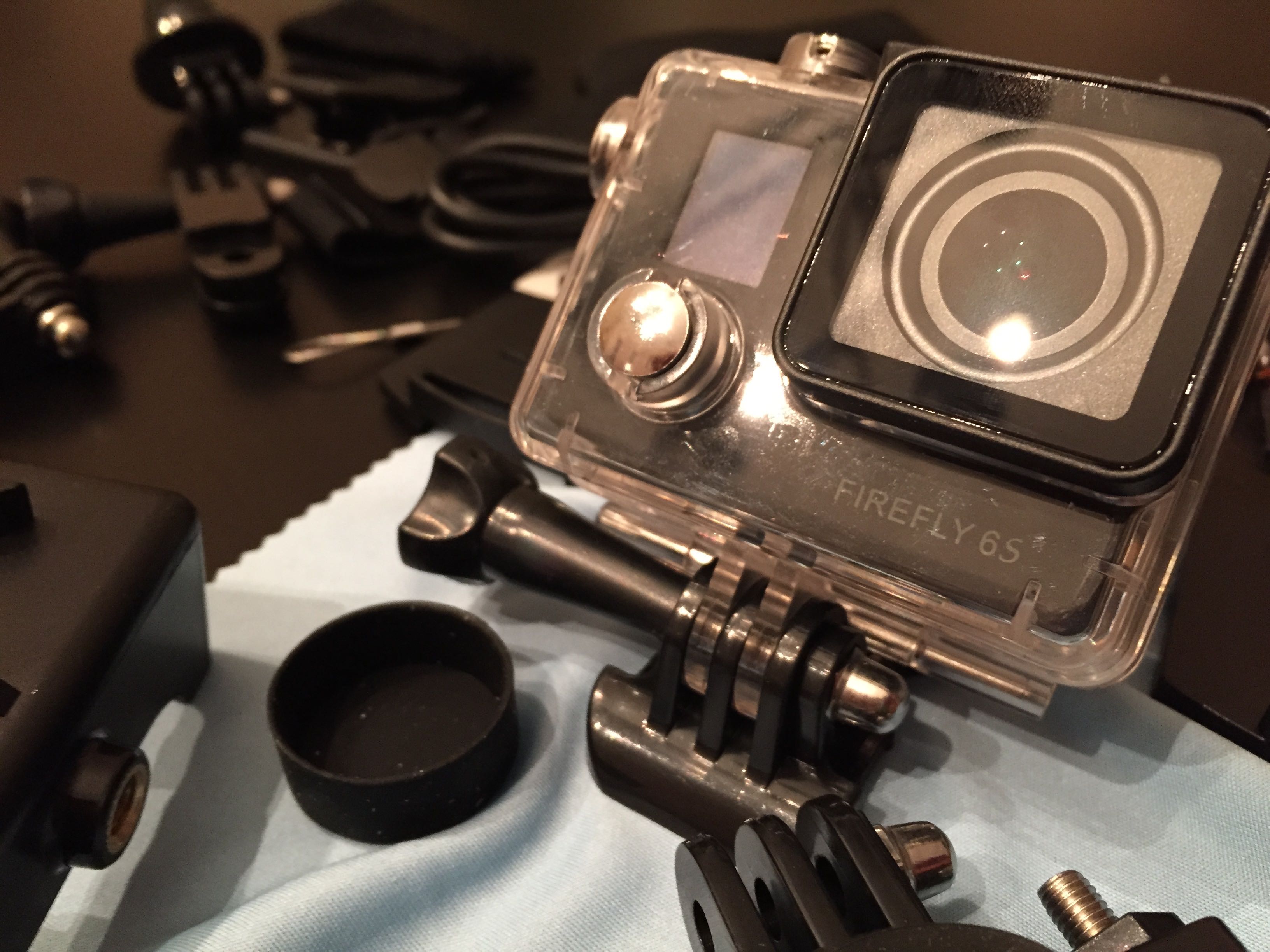 Yes, it looks quite a lot like a GoPro; the case looks like a GoPro case, the attachments look like GoPro attachments. In fact, I used GoPro clamps and mounts interchangeably with the Firefly 6s. Not only did they work with it, they worked better than the many included bits and bobs.

Here’s the sea of plastic parts you get with the Firefly 6S. 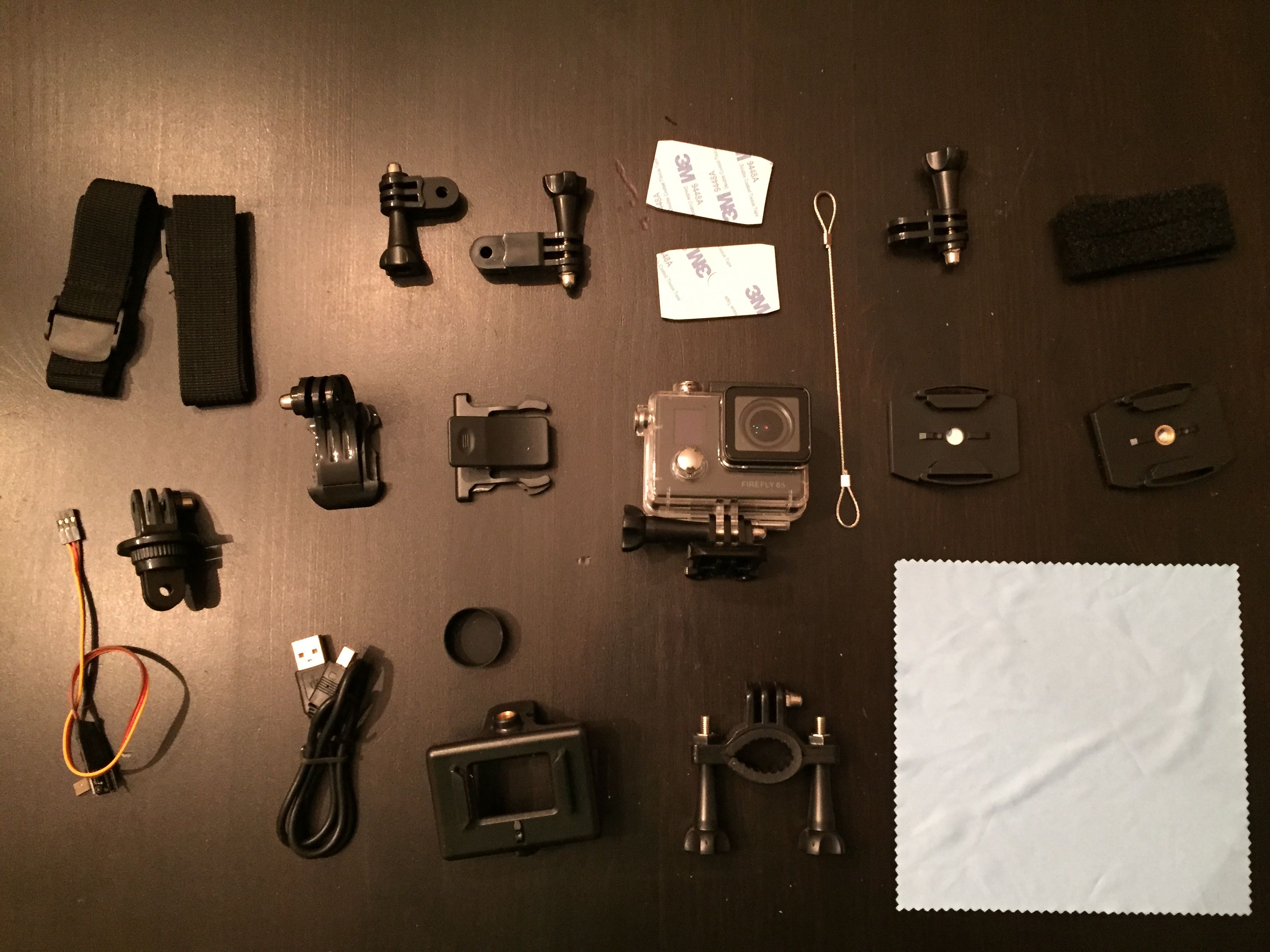 When I first unpacked the camera, I was excited to have all these bits. I have a wide assortment of GoPro bits already, but I thought it was cool that the Firefly 6s included, for instance, a handlebar mount, which I didn’t have. 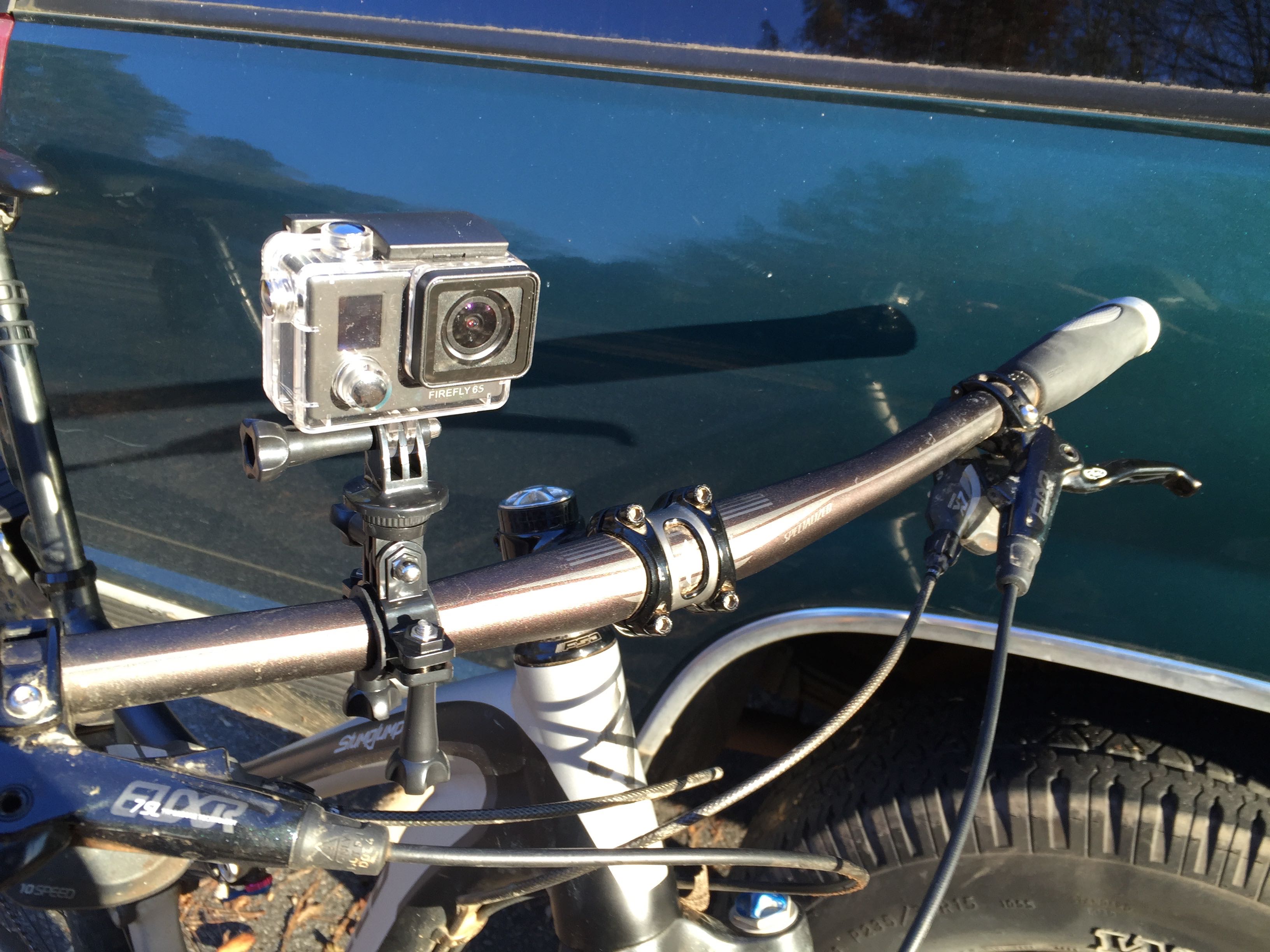 I attached the mount to my handlebars, which was a little bit of a pain. You have to hold the mount to your bars, hold the plastic bits together without the rubber cushion slipping out, and then somehow turn first one then the other pin to get it tight on the bars.

Once it was tight, I rode out of the parking lot, up the access road, and then onto the trail. About a minute later I stopped because of this. 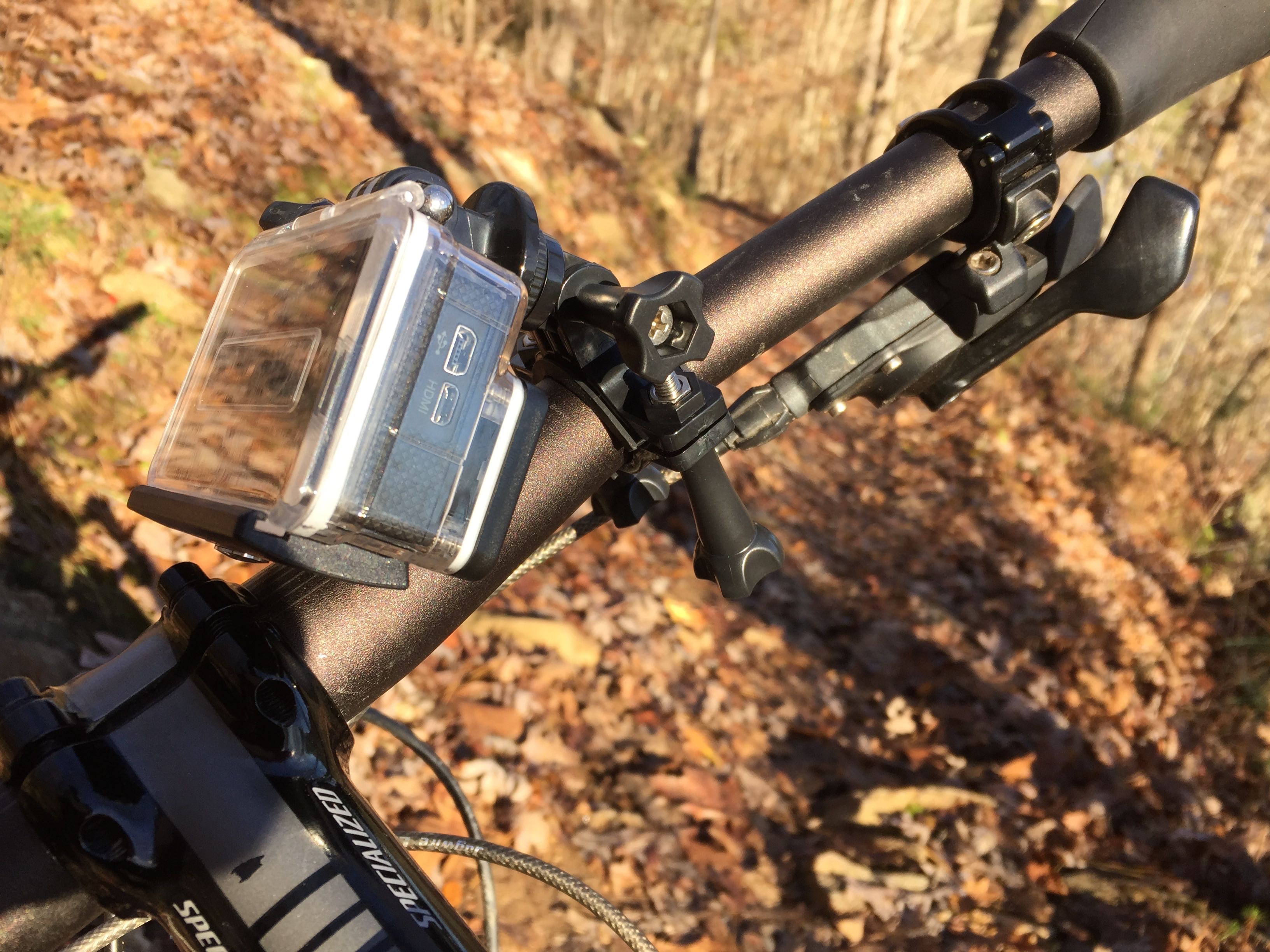 I then tightened the middle part of the mount until it felt like it was going to break, and continued down the trail. Soon I stopped again because of this.

I decided then that I didn’t care if it broke, and tightened everything until it felt like I was ripping my fingers off, and that seemed to help.

Of course, as Greg pointed out way back in 2011, handlebar video is pretty shaky, so I decided to try one of the Firefly 6S’s other attachments, the clip holder. Unfortunately, the clip holder had some less than desirable tolerance problems.

As you can see, the plastic is bent out such that the camera won’t stay in the holder. Luckily, the Firefly 6S makers have included zip ties with the camera. When I unpacked it I thought, “Zip ties?” but now I see what they’re for. 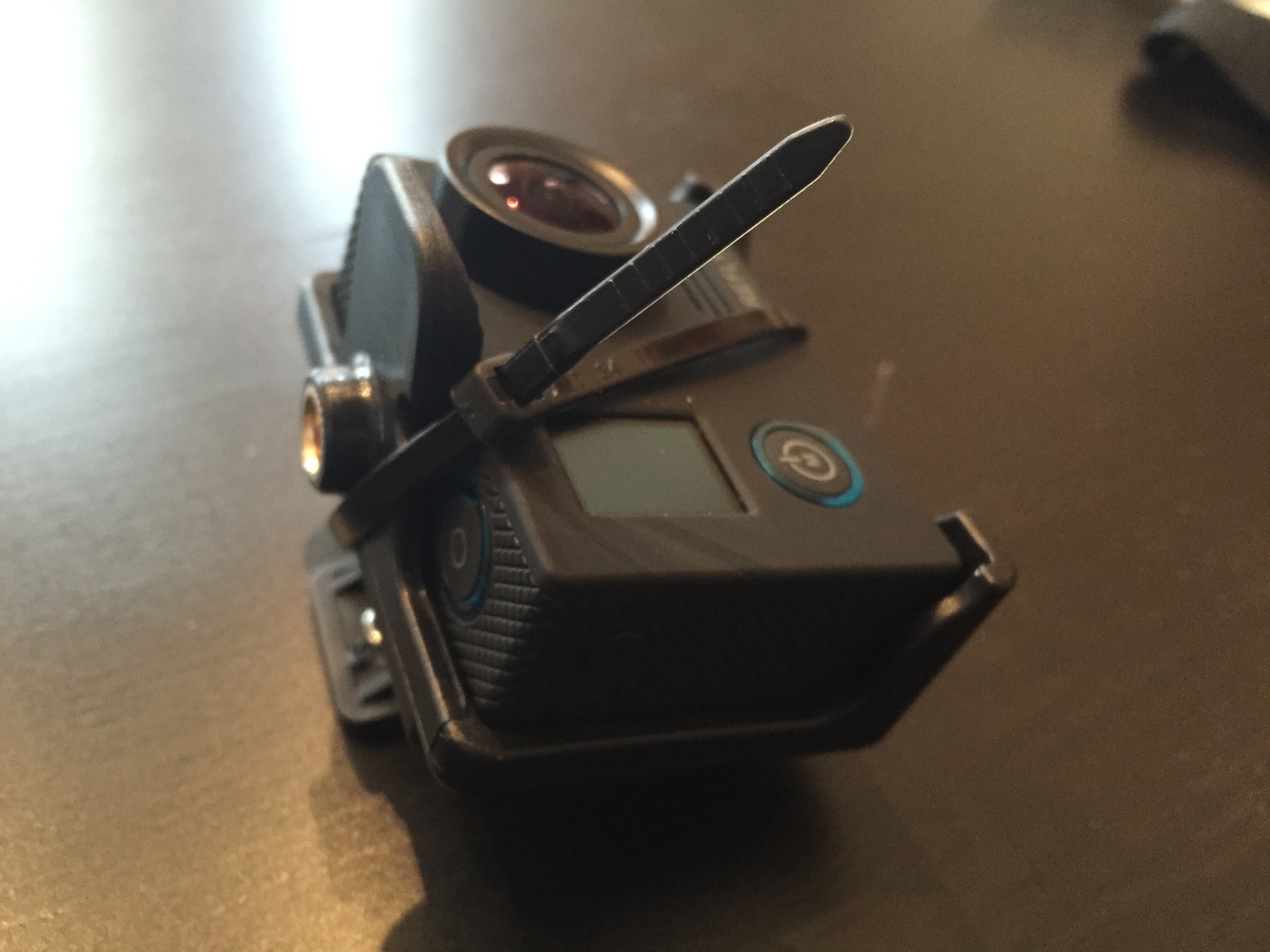 Since Greg’s article advocates for chest-mounted action camera video, I clipped the camera to my hydration pack strap. I had to move it a couple of times, first because my beard got in the way, and secondly because the angle was way too low. I stuck my MARTA transit card into the clip, and it helped some.

I also used a grabber style tripod with good results. 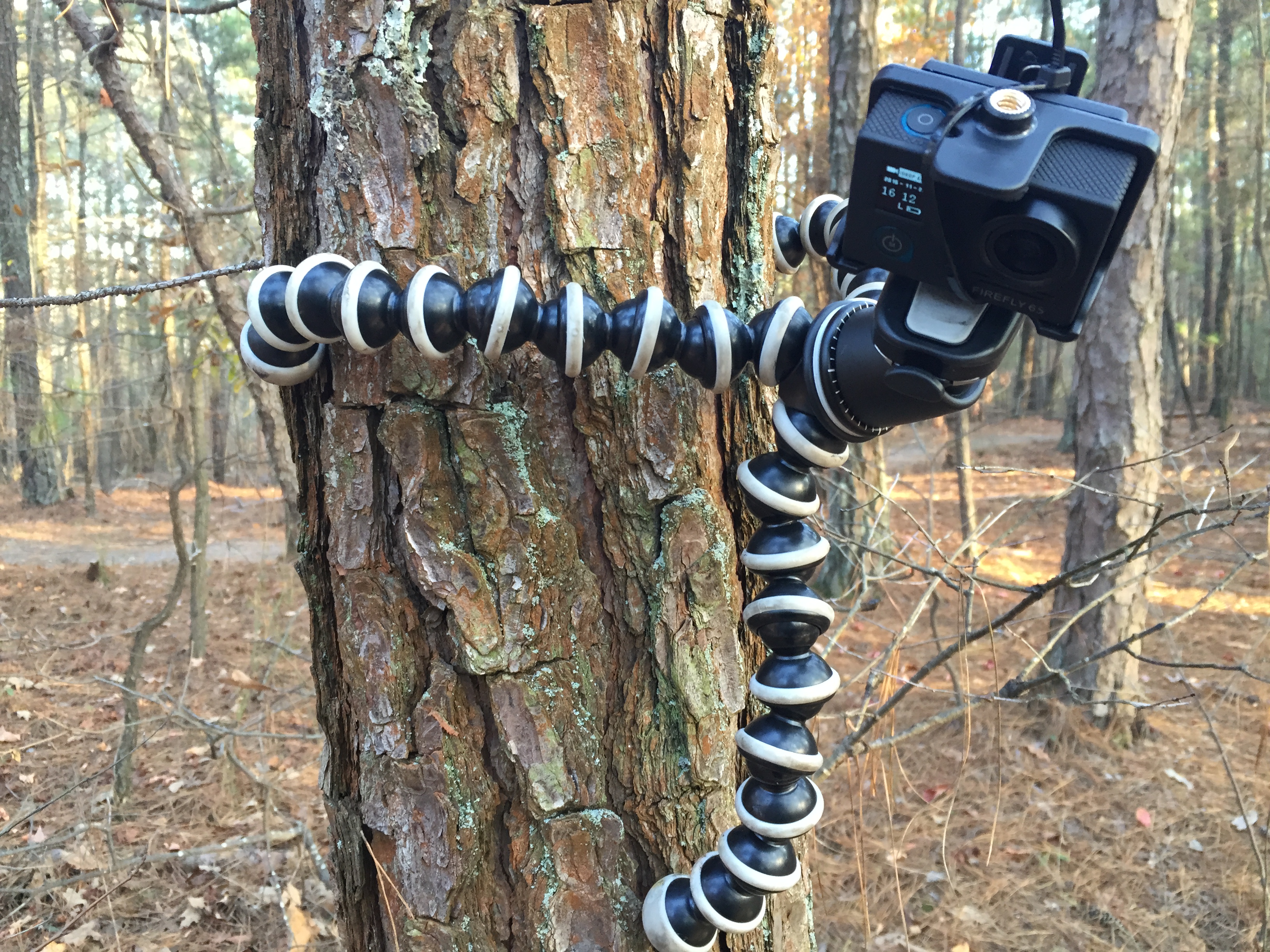 I also performed a firmware upgrade on the camera, which was a little bit of a pain, but not too bad. I had to use Disc Utility to reformat the flash card to FAT32, then stick a file on the flash card. I then stuck the card into the Firefly 6s, and it did magic to itself.

By the way, don’t clip your fingernails before you take this camera into the field. If you want to get the card out of its tiny slot, you’ll need them.

Here are some stats on the Firefly 6S:

Using the Firefly 6S was easy. The iPhone app works. Updates from the camera to the app are a bit slow, though, and a little clunky. The app occasionally has error windows written in Chinese, but that’s fine with me, I rarely read those things anyway. I just use the app to check the camera framing, and it does, but I got best results when my phone was very close to the camera so the WiFi didn’t have to work hard.

Peculiarly, you can’t set the camera to shoot the much-lauded 4k video via the app. You have to do it with the camera. The highest the app wants to go is 1080p. Setting this with the camera is a little trying because there are two menu options for size: one for the camera size and one for video. The only way to tell them apart is a teeny tiny icon that I missed the first few times.

Here’s a shot of me checking the camera alignment with the app. My plan was to ride this skinny toward the camera then hop over it, but it turned out I needed 15 minutes practice just to get down the skinny at all. 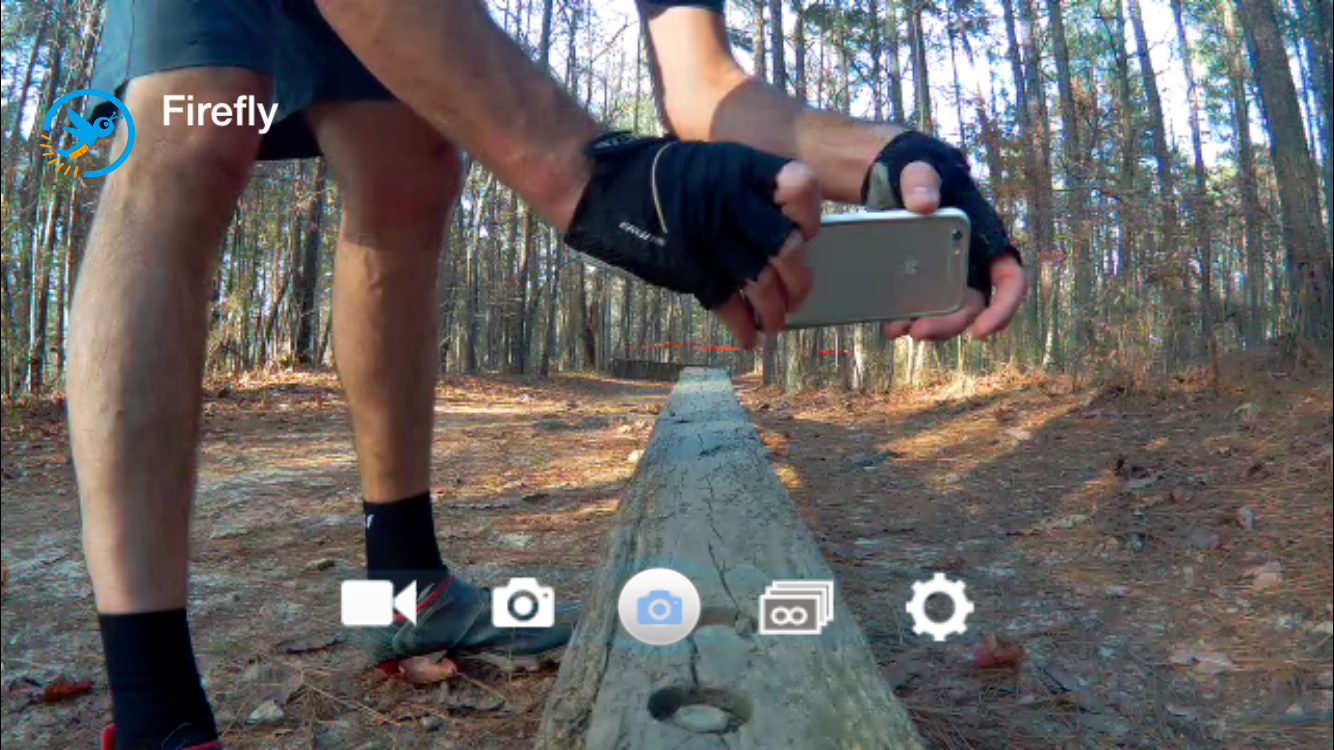 My favorite thing about the Firefly 6s is that the buttons light up to let you know the camera is on and recording. So if the camera is mounted on your handlebar, facing forward, you can see that it’s still recording without sticking your big dumb face into the frame to look for a light on the front.

I didn’t know that the first time I turned it on, though, so I stuck my big dumb face in anyway. 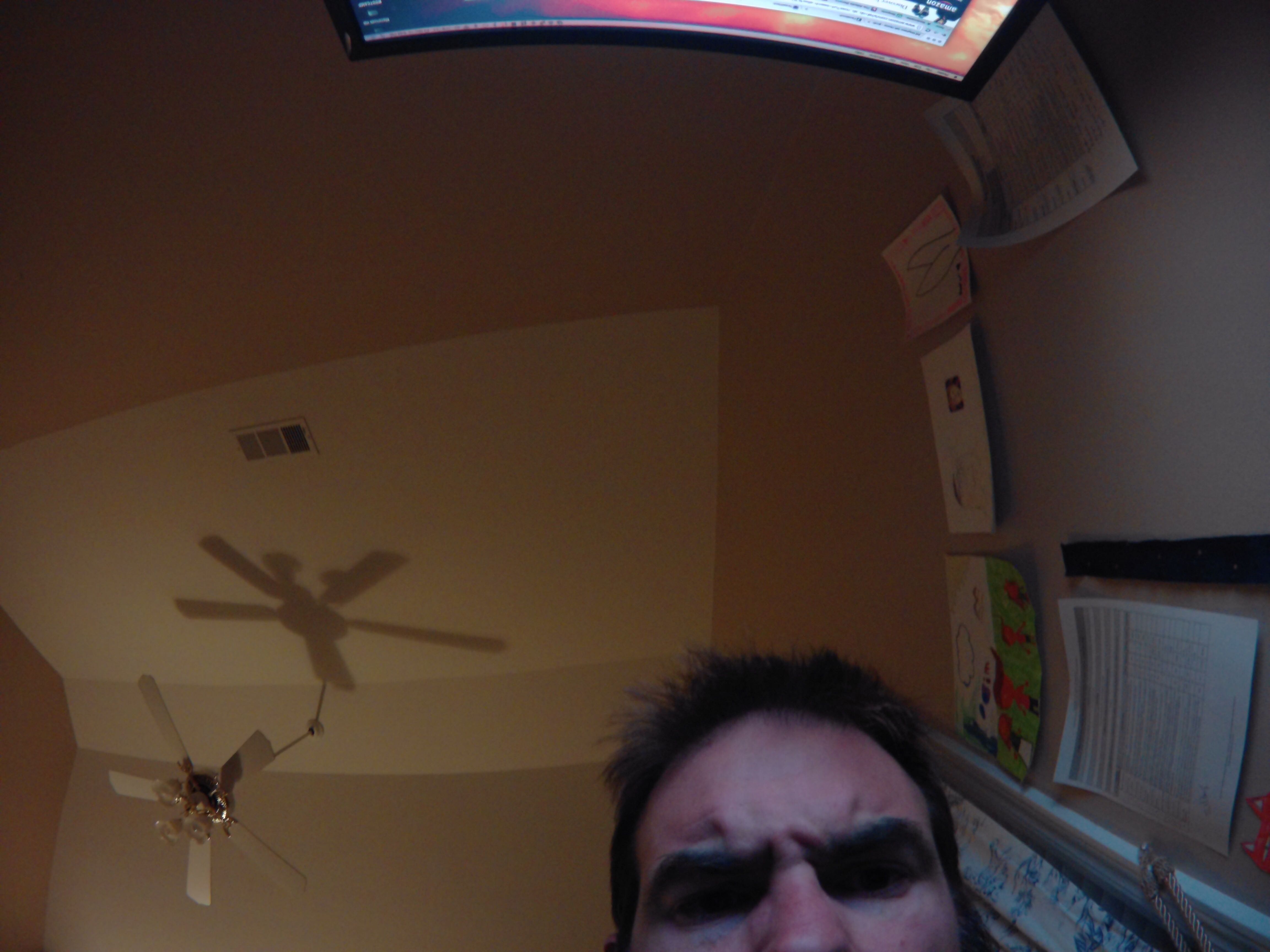 And, though the app is a little clunky, you can transfer images and videos directly to your phone via WiFi for uploading to social media of your choice. At 1080 and 60FPS, though, let alone 4K, video files get big fast, so you might want to wait until you get home on those.

Going by numbers alone, the Firefly 6s does appear to stack up to the more expensive models from established manufacturers. By “numbers alone” in this case, I mean things like video size and frame rate. But when it comes to actually putting eyeballs on the video, it’s just okay. The picture quality (not size) is along the lines of what you’d expect from an early model GoPro, which is to say, kind of blue-ish and kind of blurry.

Here’s some video of me using the Firefly 6S in various positions. This video has been uploaded to YouTube so this isn’t a super-scientific representation of quality, but you can see the character of the video is blue-ish.

In this second video I’m using the alleged 4k video mode along with the upgraded firmware. I asked my buddy Brian to stay right on my wheel so there would be something in frame other than doubles I failed to double, and he did a great job. Unfortunately, well, you’ll see.

Yeah, the mount came off. In this case it wasn’t the Firefly 6s’s fault that the mount fell off. I was using another mount. But look what happened when the camera case took that tumble. 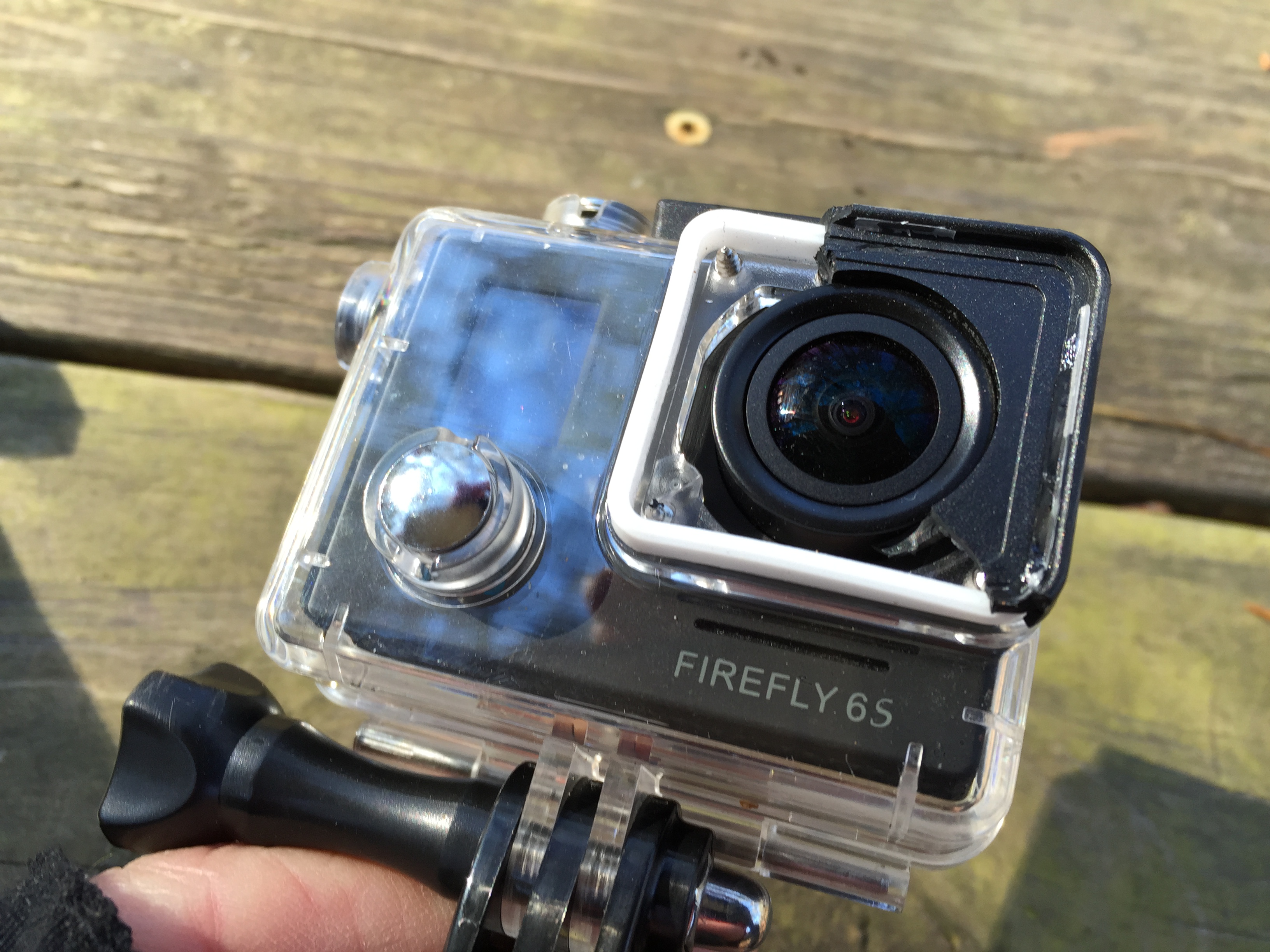 So, the mounts are kind of crap, the protective case isn’t all that protective. But at least we’re getting 4k video, right? Right?! Well, there’s some evidence on the web to suggest that the Firefly 6s video size doesn’t quite match up to actual 4k either.

The Firefly 6s wants to be compared to the top-model GoPros and then compete on its much lower price, but I don’t think it’s really a fair comparison. I had the best results with this camera when I used it with quality mounts that I already own. Your mileage may vary, but if you buy one of these, I think you can pretty much chuck the included mounts in the trash and get some decent ones from a well-known manufacturer.

And if you’re going to pay the extra money to do that, why not just get the camera from those companies too? The apps will be better, the ease of use will be higher, and you’ll probably get some decent accessories for free. GoPro sells the base model HERO for $129 retail. It’s not 4k but then, if you ask some people, neither is the Firefly 6s. And how important is 4K anyway?

That’s a question for you to answer. If you’re looking for the cheapest-possible video camera, you could get poorly-made mounts, supposedly 4k video, and a protective case that will smash the first time you need it to protect something. But it will say 4k on the box!

Or you could get an entry level model from a reputable manufacturer for about the same money (do that).

Thanks to Firefly for providing the 6s for review.

Jim Hodgson
Jim Hodgson is an author and Singletracks contributor.