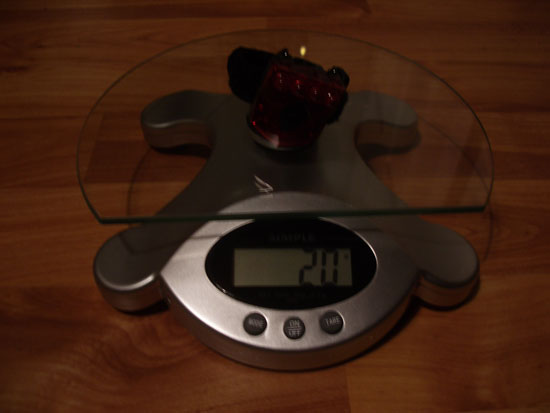 Blackburn Flea lights are amazingly small. They are small– very very small. . . did I mention they are small? and insanely lightweight. Weighing in at under 20 grams for the rear light and 20 grams for the front light, there is no reason not to keep them on your bike or in your pack just in case you end up riding on the road after dark. There are a few things that are unique to the Flea lights that need some explanation.

First, the Fleas are rechargeable with a small wire adapter that uses magnetic contacts to attach to any regular 1.5 volt cell type battery. I thought it was going to be gimmicky, but in use it works well. The adapter can be attached while the light is still mounted in place, and the adapter stays in place with magnetic contacts too. Hook up a AA, C or D cell to the adapter and the light is charging away. This is an innovative solution to get the light size and weight down. Other companies resort to using expensive-to-replace CR2032 or other lithium button cell style batteries. With Blackburn’s Flea lights you can tuck a single AA battery in with your spare tube and never worry about a dead tail light for the ride home. While charging, the lights give a faint, slow blink. When the charge cycle is complete the blinking stops. Charging from fully depleted takes about 30 minutes.

The second unique thing is the mounting technique. The front light uses a simple Velcro strap that fits nicely for both standard (25.4/26.0mm) as well as oversize (31.8mm) handlebars. The rear light can be mounted with a similar Velcro strap (oriented for seatpost mounting) or with a small metal clip. The mounting straps have rubberized treads on the inside to hold everything in place. Plus, the mass of the lights is so low there is no worry about them getting bounced off or coming loose. 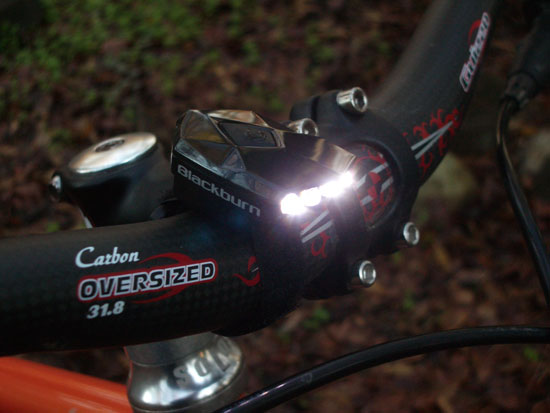 The front Flea has 4 white LEDs and has steady, overdrive (slightly brighter steady) and flash modes. This Flea is right on the edge between a see and be-seen type of light. The beam it casts is slightly broader than a spot beam, with soft edges and a good amount of peripheral light. For asphalt riding it is good to about 12 to 13 mph before you start to out ride the light (where you can’t see far enough ahead to safely avoid road hazards). Off-Road the illumination it provides is acceptable so long as the trail has good contrast to the surrounding landscape. This time of year (late fall) when there are leaves both on and off the trail I had to slow down considerably. As a supplemental light to a good bright helmet light the Flea’s performance is flawless. When used as a be-seen light the flash mode does an outstanding job of calling drivers’ attention to a cyclist or something else out of the ordinary coming at them – it borders on blinding at under 20 feet at night. Even in full daylight the flash mode is effective to make drivers pause and think “WHADAHECKISDAT!” Run time for the front light is advertised at 6 hours in flash mode– my run down test yielded about 6 hours, 15 minutes. The front light weighs an even 20 grams with the mounting strap. 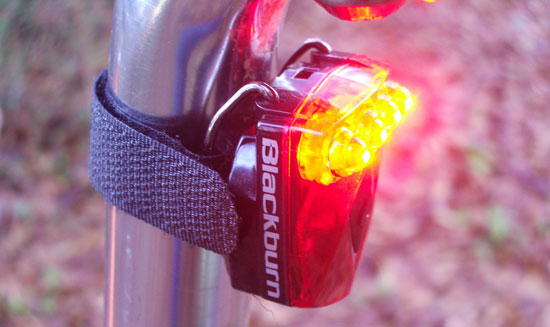 The Blackburn Flea rear light has 4 very bright red LEDs and has similar brightness as lights twice its size. Modes include steady, flash, and chase. Run time is advertised as 6 hours in steady; in my run down test it lasted for 6.5 hours. Flash mode is advertised as 12 hours, but I did not have a chance to do a run down test in flash mode. As I mentioned earlier the rear light weighs in at 18 grams for the light and clip, the Velcro seatpost strap adds another two grams. For comparison, the AA Alkaline battery I used to charge the light weighs 24 grams.

Both the front and rear Blackburn Flea lights have very good sealing and waterproofing. The lack of a battery door and the presence of tiny charging contacts means Blackburn has designed the units to be fully sealed. The switches have nice rubber caps on them with a little Blackburn logo for style and grip, and they are easy to operate even when wearing thick insulated gloves.

I like the Blackburn Flea lights: the rear light is small and packs an impressive punch of bright red blinkiness while the front light provides enough light to see in a jam and plenty of be-seen flash when you are out in the dark. Weatherproof, tough casings and ultra-low weight make it easy to install the lights or carry them in your pack and forget about them until you need ’em. In the spring and fall the front light will certainly help squeeze in that last half-hour of afterwork riding without lugging around a full light system. The recharging method works surprisingly well and the mounts are simple but effective. You can find the set of Blackburn Flea lights for around $50 online or $29 individually.

[…] and mountain bike gear reviewer here at singletracks, 2leftfeet (see his excellent posts about the Blackburn Flea and Dakine Drafter). Greg has encyclopedic knowledge about mountain bikes and components gained […]