Upon arriving back at the Outerbike venue from our shuttle ride to Navajo Rocks, Greg and I noticed a distinct lack of bikes. The weather had warmed up and everybody was out on the trails. With the pickin’s slim, I noticed a lone, Kawasaki-green hardtail in the back of Giant’s booth. A hardtail might not be the ideal bike for Moab’s chunky terrain, but in general, I’m a big fan of a rigid rear. I was also interested in the new XTC frame because of its ability to be run as a singlespeed. “What the hell,” I thought, “I’ll give it a shot!”

The XTC is Giant’s long-standing hardtail, available in a variety of builds from an entry-level $1,850 up to a World Cup-ready $7,200 race machine. The Advanced tacked onto the end of the name means the frame is carbon fiber. I rode the XTC Advanced 27.5+ 2, which retails for $2,800. None of the components qualify as lust-worthy, but it’s a smart build that gets the job done. Giant opted for a complete SRAM NX 1×11 drivetrain, including the cranks. Suspension duties are left to the venerable RockShox Reba with 120mm of travel. Boost spacing is used front and rear to provide clearance for the Schwalbe plus tires, although the frame can also be used with 29er wheels if you want to go with something a little racier. 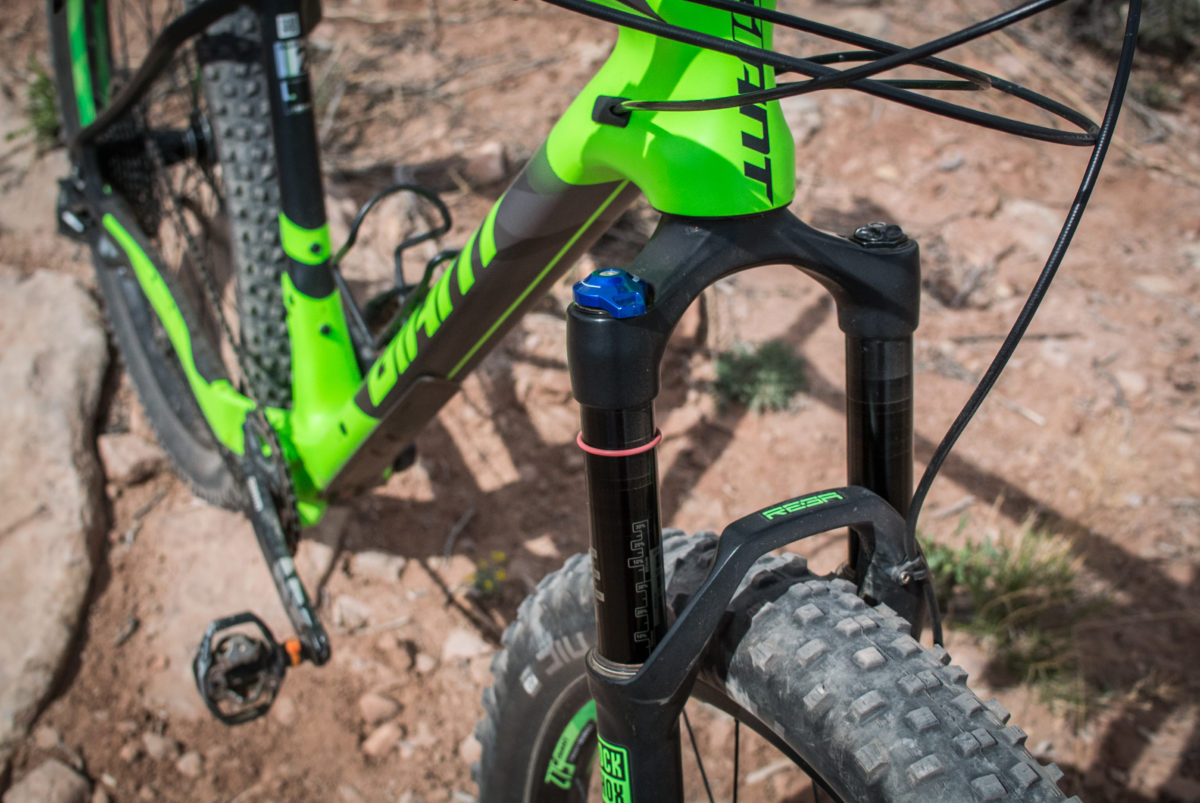 As you might expect, there are plenty of Giant-branded components on board, including the wheels and cockpit. There was one component that I could tell I hated, even on a brief ride – the Giant Contact SL saddle. Calling it a saddle is being too kind, though. It was, in fact, an ass hatchet. It’s a good thing Giant included a dropper post in this build, because you’ll want to keep that saddle away from your butt as much as possible. The dropper is from TranzX, a brand I’m not familiar with. It worked just fine, though, and actually had a nice, easy feel at the lever. The only issue I found with the dropper was it had a rattle to it when it was unweighted. Most droppers have some side to side play, but in this case it was audible.

However, the coolest thing about this frame is that you have the option to run it as a singlespeed. Giant integrated sliding, horizontal dropouts into the frame to adjust the chain tension when running SS, or to change the effective chainstay length when running gears. Giant sells the XTC Advanced as a frameset for $1,625, but good luck getting your hands on one. I talked to the Giant rep at Outerbike and he ended up buying the bike I rode just to get the frame.

I took the XTC on the Brand trails that are adjacent to the Outerbike venue. Greg and I started on Lazy/EZ, which was hard-packed, swoopy, and fast. From there we headed over to Deadman’s Ridge, which was decidedly more technical. Through it all, the neon Giant proved to be a thoroughly competent hardtail. Even in the chunkier sections of Deadman’s and Bar B, the XTC remained composed and confident. I couldn’t keep up with Greg on the enduro bike he was riding, but that’s not surprising.

The parts package is solid enough for any rider, and I was particularly impressed with the NX drivetrain. It banged out shifts smoothly and accurately. It wasn’t as crisp SRAM’s higher end X01 and XX1 offerings, but the complete gruppo costs the same as an XX1 cassette. Similarly, the Reba isn’t the plushest or most adjustable fork, but it’s a workhorse. If this were my bike, I’d ride it stock (except for the saddle) and upgrade things as they wore out.

On the whole, the Giant XTC Advanced looks to be a promising mid-range hardtail. It’s a good fit for a rider upgrading from a an entry level bike or someone looking to add a reasonably priced – but trail worthy – hardtail to their stable. The ability to run plus or 29er wheels, and the option to run singlespeed, make it all the more attractive.