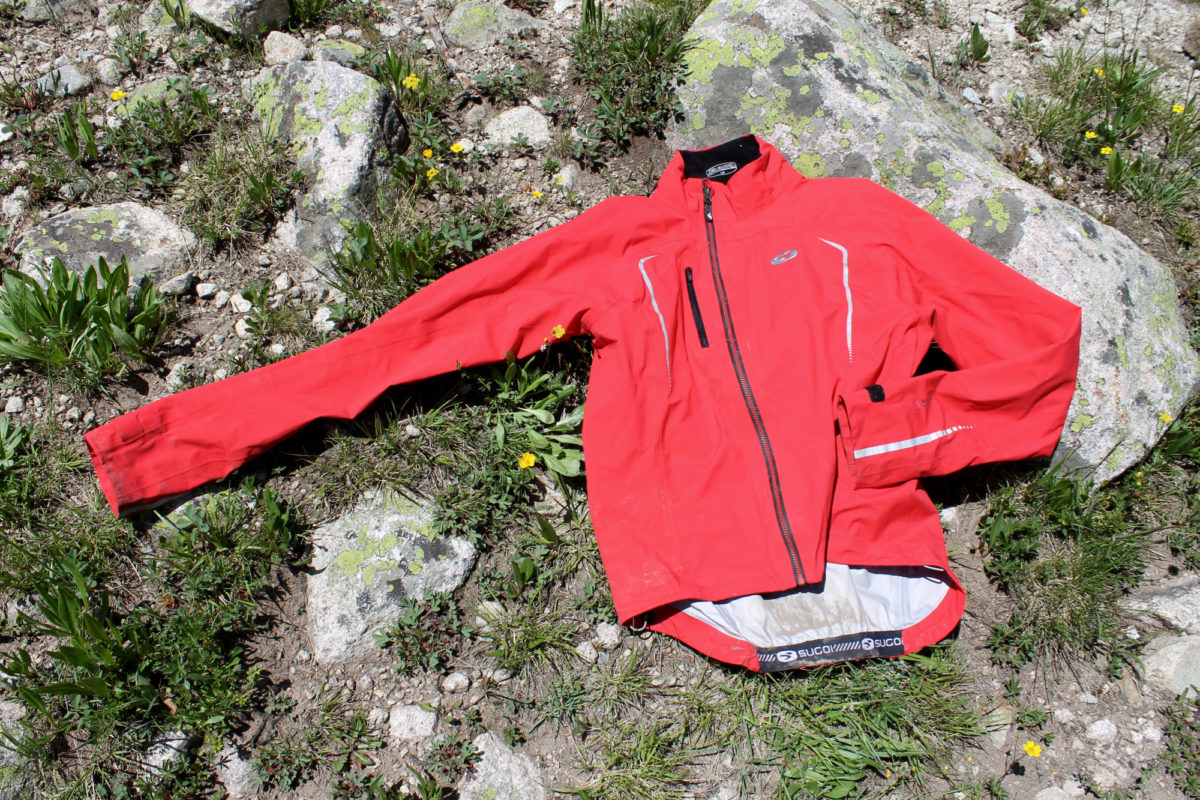 Sugoi has released a rain jacket that they claim is 100% waterproof, and yet fully breathable–specifically, 2x more breathable than comparable membranes. This claim flies in the face of conventional knowledge–everyone knows you can’t have a breathable membrane that keeps out water adequately! Yet that’s exactly what Sugoi claims they’ve produced.

I’ve put the RSE NeoShell jacket to the test, to see if these claims hold water in the real world. 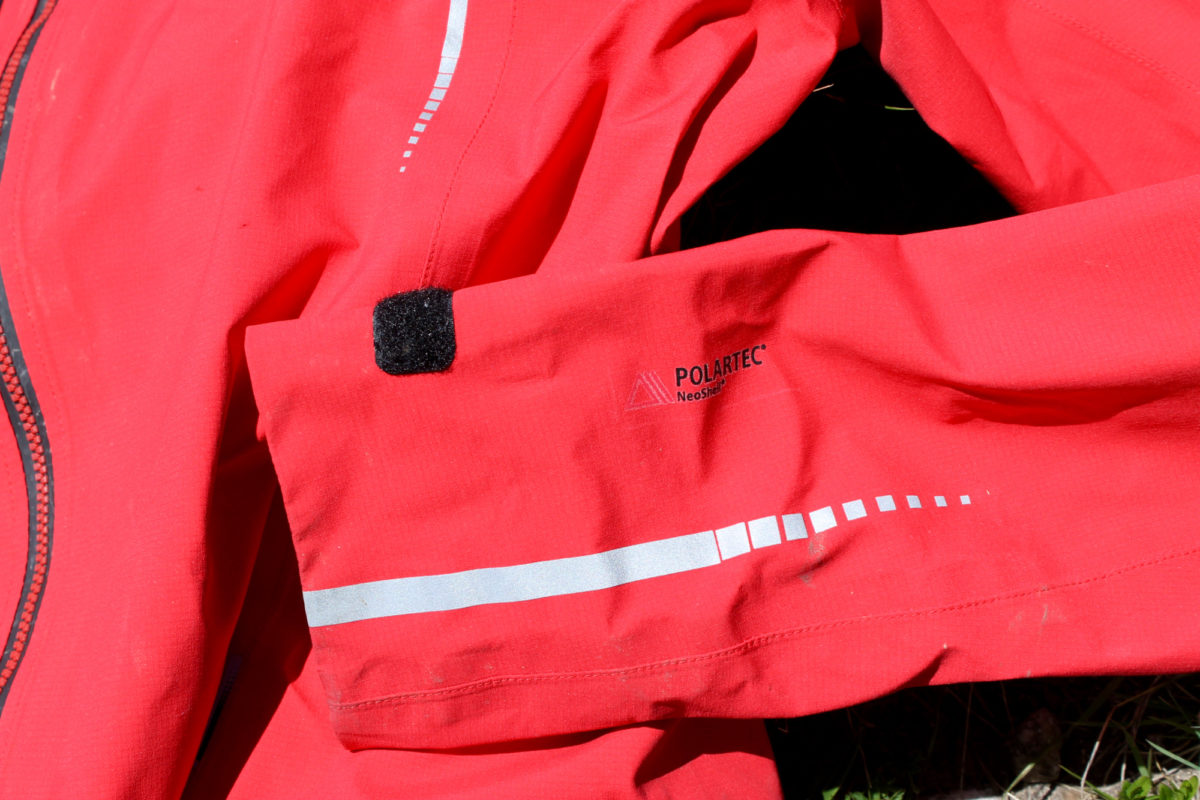 The RSE Neoshell jacket features a proprietary Polartec Neoshell fabric that provides “dynamic air exchange” in order to be totally waterproof, yet breathable. The fabric has a waterproof rating of 10,000MM, air permeability rating of 0.5 CFM, and is 99.9% windproof. For more information on the technology in this jacket, check out this video:

The RSX model comes with a detachable hood, but the RSE model does not. However, it does have a zippered pocket on the back for large storage, and a zippered chest pocket for small items.

To be totally honest, at first I thought Sugoi’s claim was marketing hogwash. So for one of my first tests of the RSE Neoshell, I paired it with a base layer, anticipating to use it as a warm, insulating outer shell for a fat bike ride.

Over the course of that 5-hour ride, I discovered how truly breathable the Neoshell is! Normally if I pair a hard shell or rain jacket for winter or cool weather riding it works to trap body heat inside, keeping me warm and cozy even in cold temps. Without thick insulation it can generally be chilly when standing still, but once my core heats up from exertion, trapping the body warmth with the shell proves to be the perfect combination. 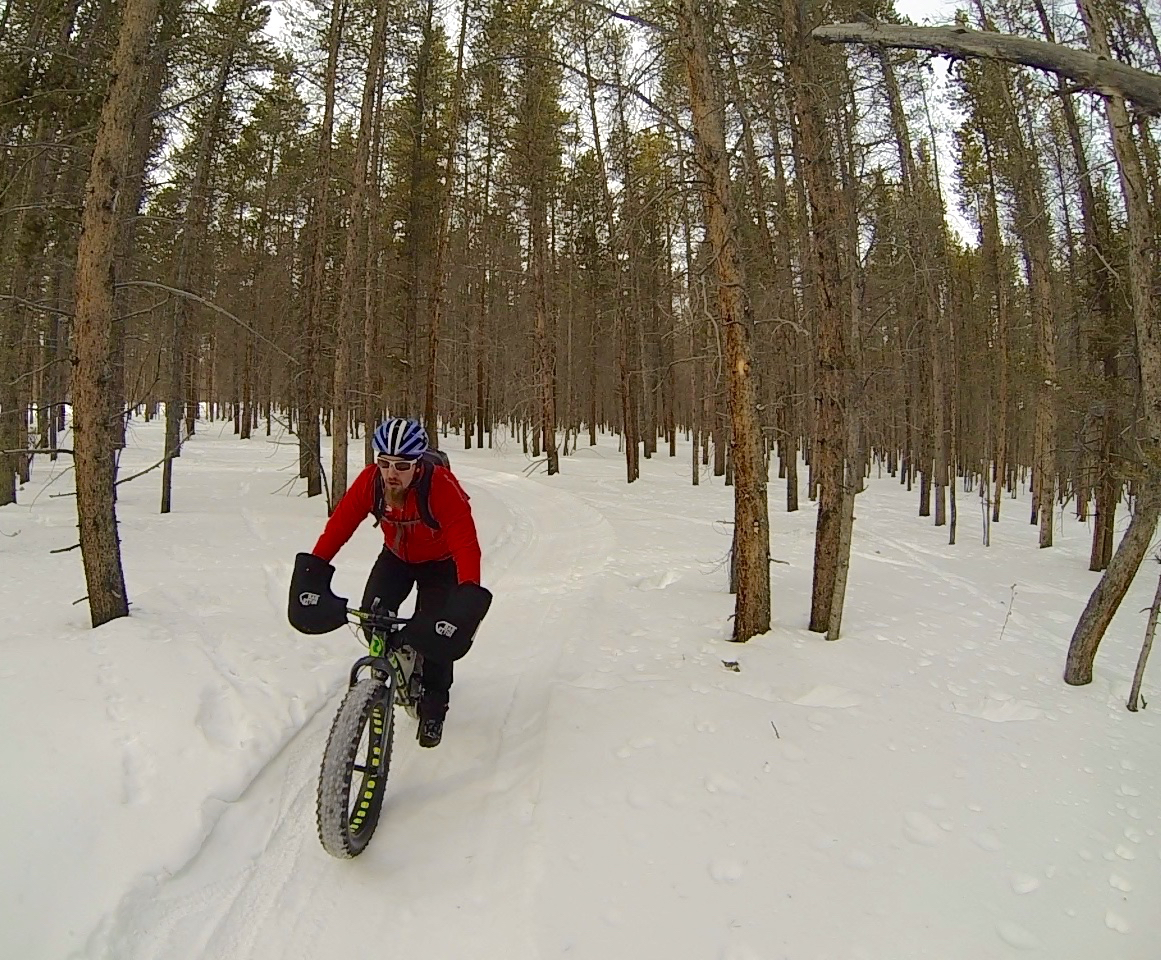 The Neoshell, on the other hand, proved to be so breathable that it had virtually no insulating effects to trap my body heat. Sure, it helped cut the wind, but the body warmth that I was counting on to stay inside the jacket instead escaped out through the membrane, making for quite a chilly mid-winter ride!

But before I could write about this jacket adequately, I needed to test it in warmer, rainier weather. 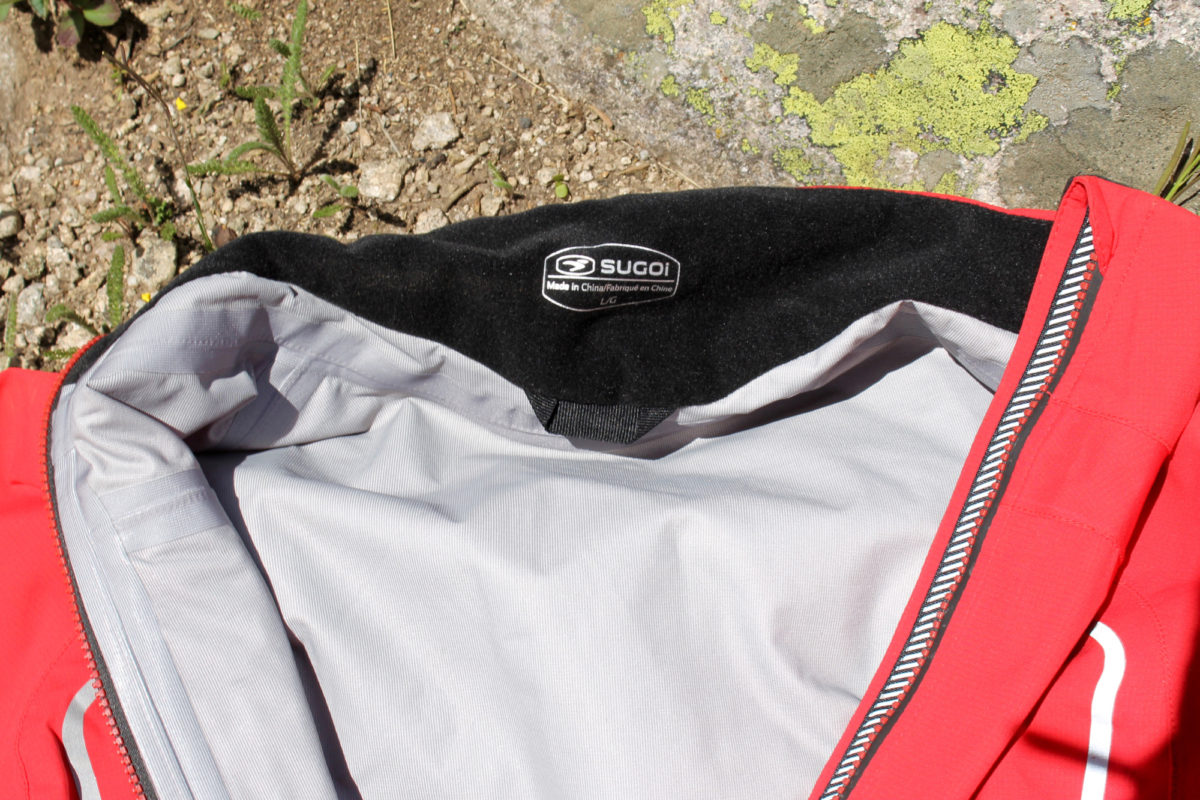 While we had a pretty dry summer overall in Colorado, I did get my chance to take the Neoshell out in a real soaker. Not only did the skies open up and pour down on my head for about half an hour, but the trailside leaves had already been soaked from the night before, meaning my jacket spent basically the entire four-hour-ride getting battered with moisture.

Yet again, despite relatively warm temps, I didn’t overheat in the jacket, and it repelled all the water that the environment attacked it with.

In one final test scenario, I wore the Neoshell in relatively-cool temperatures (high 50s), while pedaling under threatening thunderheads. While we didn’t get rained on during that ride, since the Neoshell is so very breathable, I was perfectly comfortable wearing this jacket the entire time we were pedaling. The breathability that prevented the shell from trapping heat during the fat bike ride proved to be a massive benefit during standard mountain biking. While I would have quickly overheated and started sweating in a standard rain jacket, making it muggy and clammy inside, the Neoshell regulated heat admirably, making it comfortable to wear for the entire outing. 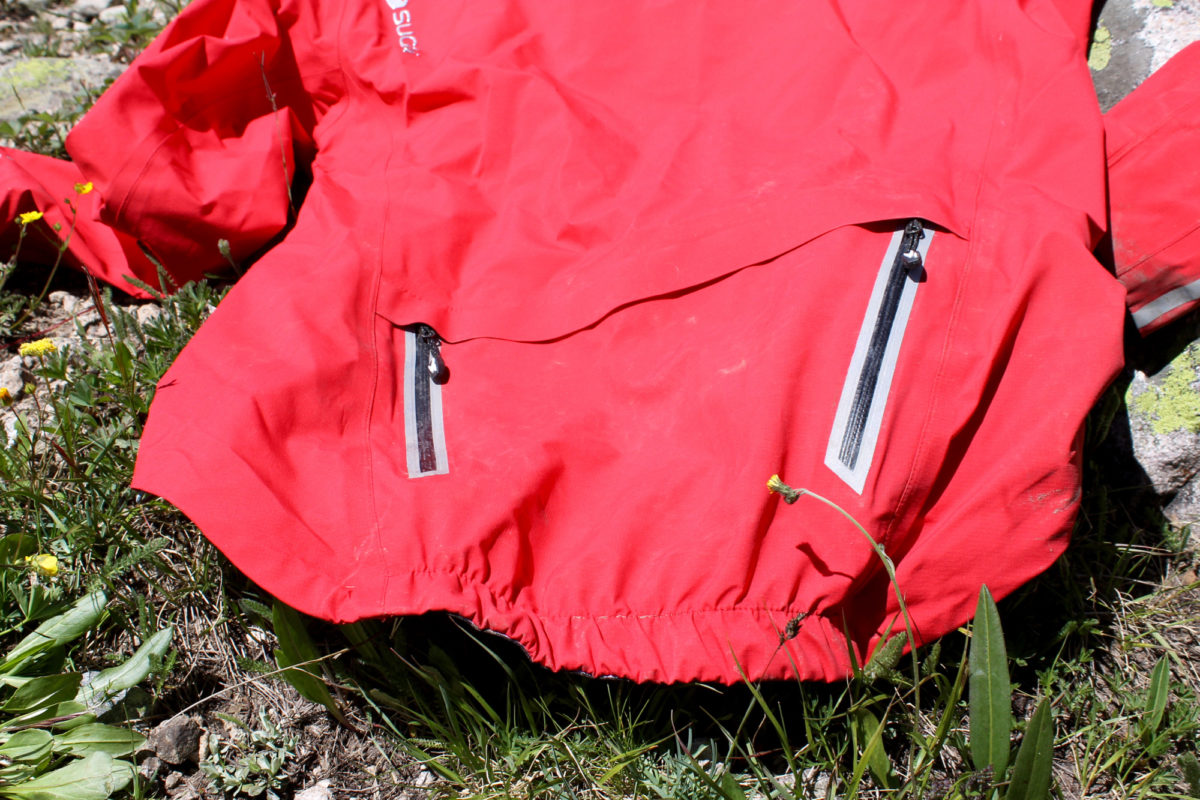 While it’s now en vogue for baggy jerseys and some jackets to come with a zippered pocket in the rear for gear storage, rarely have I found those zippered pockets to provide truly usable space. But on the Neoshell, I was very pleasantly surprised!

I found the rear pocket to be easily-accessible and offer plenty of storage space. With zippers on either end, you can access the pocket with whichever of your hands is free or dominant. While the pocket might not look large in the images here, I was able to easily fit two 24-ounce water bottles in it simultaneously–impressive! 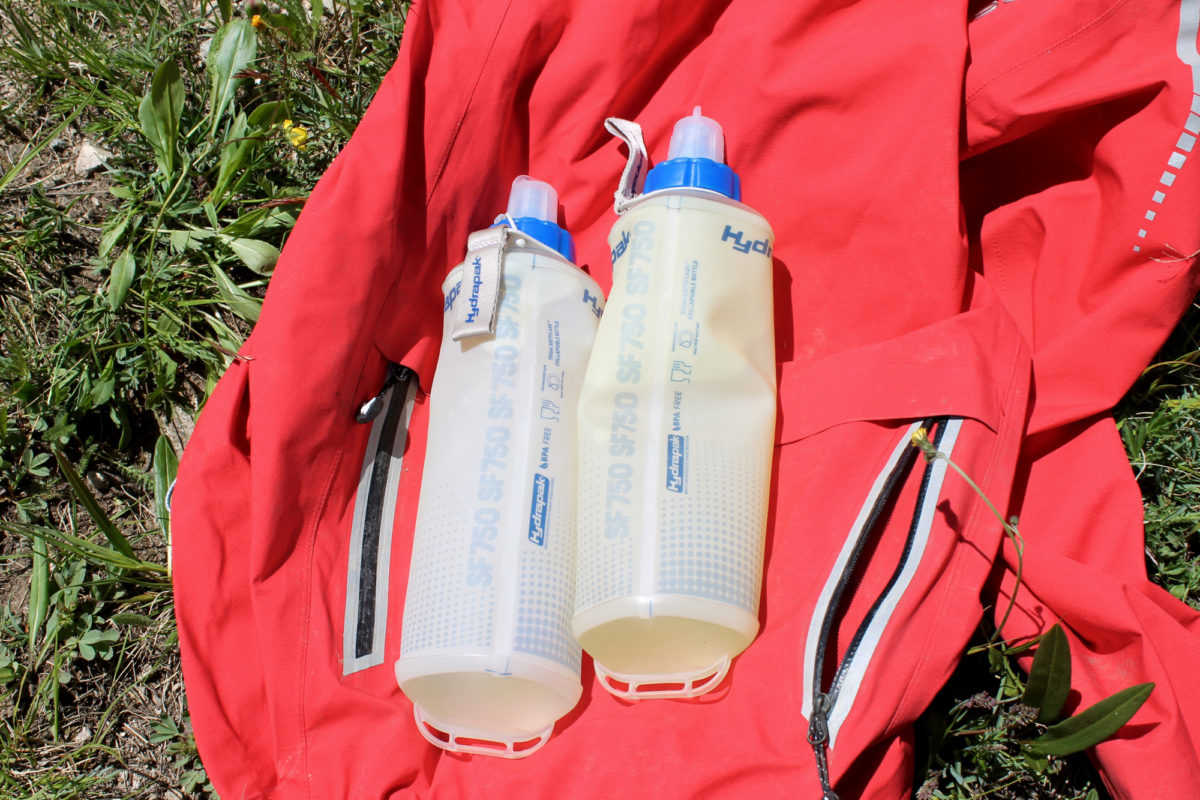 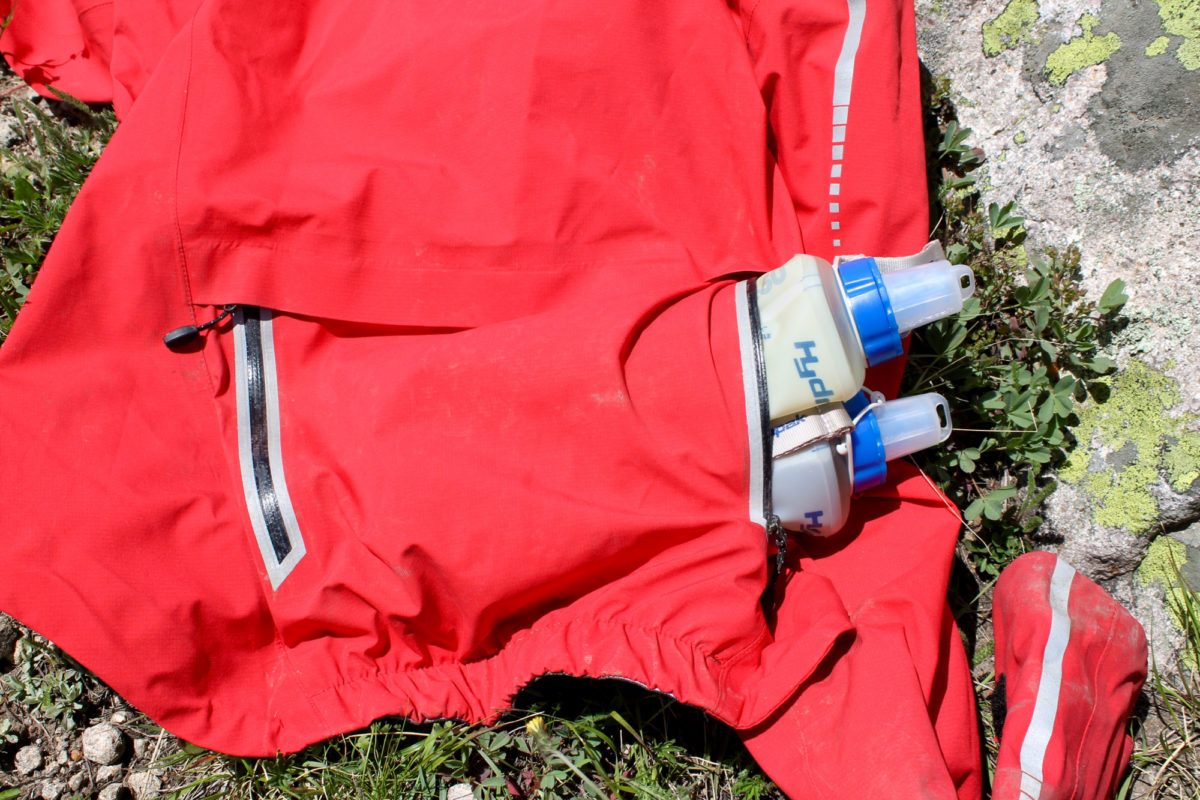 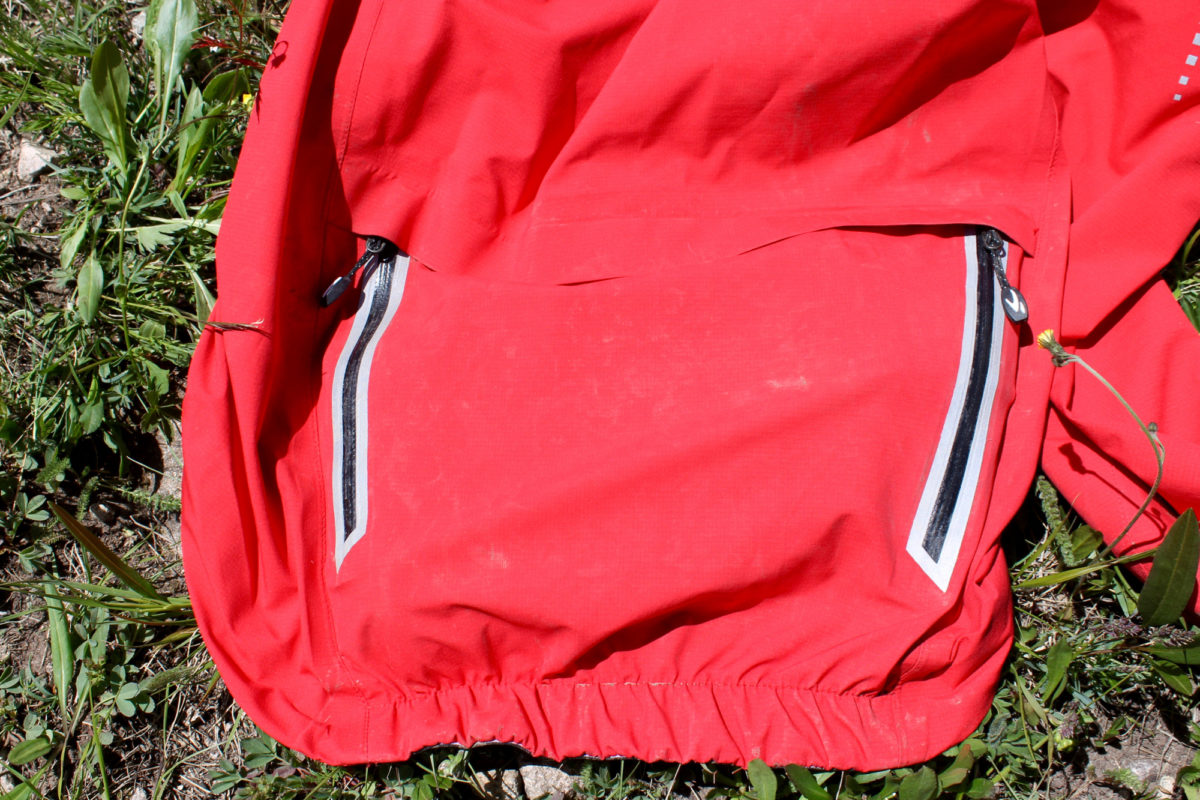 Despite loading the large pocket with a lot of weight, I still found the jacket to ride well and feel quite normal. The weight didn’t bounce around, the jacket didn’t pull awkwardly, and in general it hauled the gear easily and naturally.

Despite the audaciousness of Sugoi’s claim that their RSE Neoshell jacket is 100% waterproof and totally breathable, I found it to ring true. The Neoshell was breathable to the point of not functioning well as an insulating winter layer, but instead proved to be completely wearable for entire rides during the spring, summer, and fall, without getting clammy or nasty on the inside.

Finally, other bonus features like the rear pocket and other accents proved to be highly-functional and well-conceived. In short, the Sugoi RSE Neoshell is a high-quality rain jacket that I can recommend without any reservations!

Thanks to Sugoi for providing the RSE Neoshell for review.

Greg, what’s your opinion? Do you think pit zips would help at all? I read some other reviews online. The review on Bike Mag done by Felton said he did get a little clammy inside and that he wished the jacket had pit zips for really exerting rides. Maybe he was testing it in moister climates than CO. It sounds like a really good jacket for dry areas like CO and Mongolia. I might have to consider this for Christmas. My jacket is pretty worn at this point.

I personally think the point of this jacket is that it’s so breathable that it shouldn’t need pit zips. However, of course having pit zips would add the option for even more ventilation. Here in CO, rarely do I ride in temperatures and weather where I would need more breathability than this jacket provides AND rain protection at the same time, but that’s just based on my local clime. In GA, I could totally see it.

Thanks for the reply Greg. Mongolia is drier than CO, so I think it should work well for me in both locations. I think this is my next rain jacket. =)

Nice, I hope it works well for you!!

I know thats a steep price tag , but thats the mark of a high qaulity kit . “You get what you pay for”.
Maybe these will be on a killer deal sale come black friday ..

Chris, I have already seen the jacket listed as low as $132 on some sites. So I think deals are out there for the taking.