Group rides are back! Well, at least judging by the latest bike racks Yakima and RubiconEP are showing at Sea Otter this week.

RubiconEP claims their 5-bike Corral Bike Rack is “one of the strongest, lightest, and most functional upright bicycle racks ever introduced.” It’s rated for carrying up to five, 60lb. (e-)bikes, and the rack itself weighs 72lbs. The rack tilts down for vehicle access and to make it easier to load and unload bikes at the trailhead. RubiconEP offers 2-, 4-, and 5-bike versions priced at $999, $1,499, and $1,699 in a variety of color finishes.

Yakima is also showing a 6-bike hanging rack at Sea Otter this week called the HangTight 6. It’s designed to hold — you guessed it — six bikes, and is priced at $999. The HangTight tilts just like the RubiconEP Corral, though it’s limited to 37.5lbs per bike, so e-bike owners may need to look elsewhere. The HangTight 4 holds four bikes and is priced at $799. Look for both HangTight racks to be available starting around mid November.

LoloRacks is another company that has been selling 4- and 6-bike vertical bike hitch racks for a few years now. Those racks are made in the USA and are priced around $800.

We won’t be surprised to see other brands release vertical bike racks in the future, which is a welcome change from the lonely, single tray bike rack trend from a few years back.

Gear
Kuat's New Bike Hitch Rack has Kashima-Coated Arms Because Why...
Gear
The Thule Helium Platform 2 is Another Great Hitch Rack...
Gear
What is the Best Type of Vehicle for Transporting Mountain...
Gear
The Yakima HoldUp EVO Bike Rack Can Carry Pretty Much...

There is an awesome local (if you are in Calgary, AB) company that makes racks: https://mammothmounts.com/ I have their 6 and it is great. Very similar to LoLo racks but cost me less and no import duties to Canada.

Just back from Moab where I saw the Utah based Velociracx. They had models that would hold up to 7 bikes. I settled for the four bike rack. The rack tilts for easier loading/unloading or will drop completely if you want to use it as a parking station while camping. Also comes with a garage wall mount. 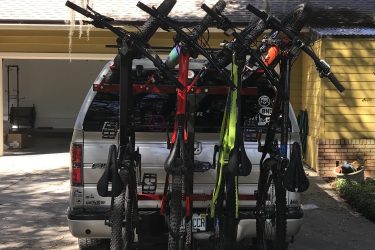 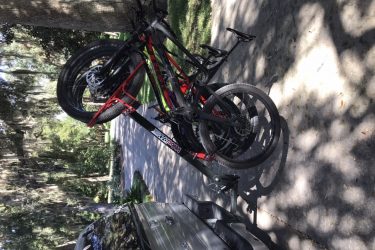