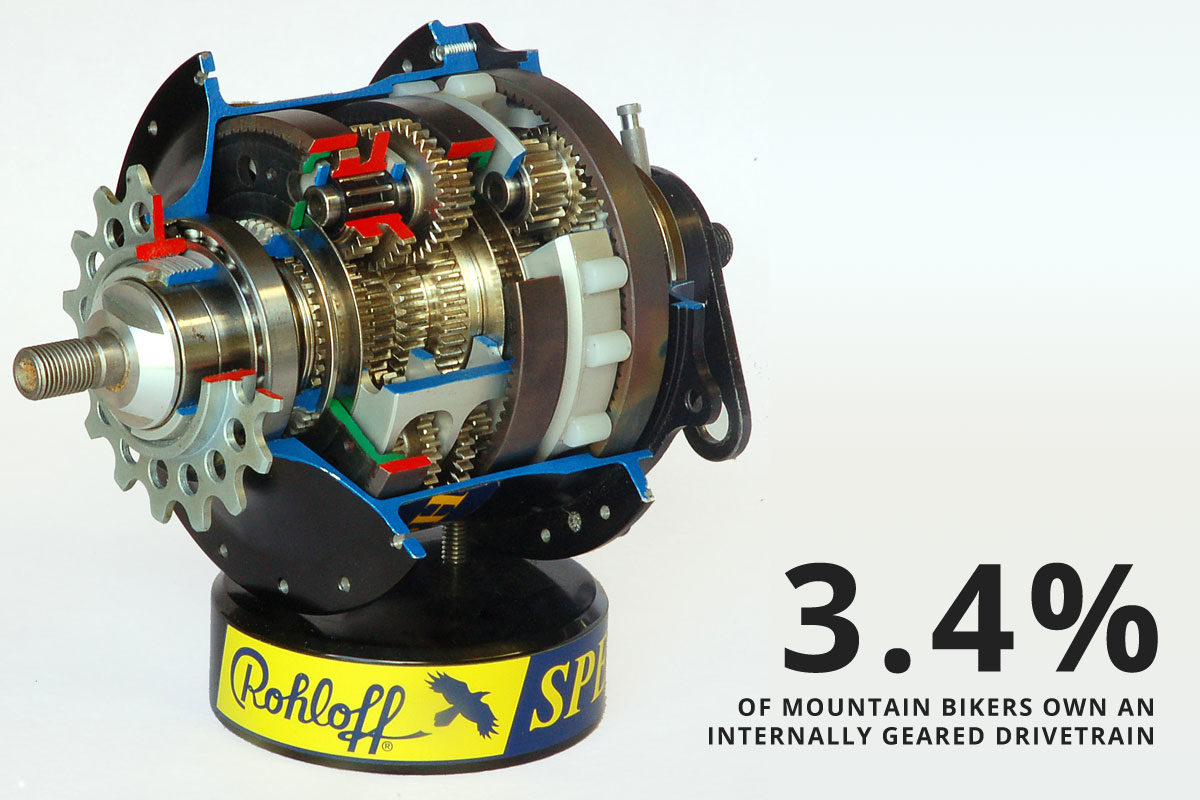 As a part of our annual mountain bike gear survey, we asked questions about several fringe but potentially up-and-coming mountain bike technologies to gauge current adoption rates. For example, we found 1.2% of our readers own at least one electric bike and 1.4% are running electronic shifting (like Di2). Yet despite grabbing all the headlines and stirring raucous debate among mountain bikers, the adoption rate for both of these technologies pales in comparison to another piece of “fringe” tech: the internally geared drivetrain.

Of course the internally geared drivetrain has been around for much longer than electronic shifting or e-bikes, which could have something to do with its robust adoption rate (relatively speaking) of 3.4%. Or, it could be that purely mechanical systems are more popular among today’s mountain bikers.

If you’re not running an internal drivetrain, is it something you might consider in the future? Are you more or less likely to go internal than to buy an electric mountain bike or Di2 drivetrain?

I think internal gearing is very interesting and has a lot of potential in MTB, I know that weight-weenies abhor the idea, but I think it’s pretty cool….
….however I gotta ask, who, exactly, is taking your surveys? I’ve seen quite a few e-bikes and I’ve seen, and own, an electric shifting bike, but I have only seen photos of internally geared MTB bikes, I’m not even seeing these bikes at my LBS or, for that matter, regional bike shops.

Perhaps regional differences in adoption rates might explain what you’re seeing? Nearly 1M unique mountain bikers read Singletracks each month, and roughly 40% of those are located outside North America. We surveyed a sample of those 1M mountain bikers–a bit over 2,000–which results in a pretty tight confidence interval, even for small percentages like this one. Based on the stickers we sent in the mail to the survey respondents, we hit people in pretty much all 50 US states and Canadian provinces, plus dozens of countries outside the USA and Canada.

This does raise an interesting question: do pockets of tech exist in mountain biking? From my own observations, I can say it’s not unusual to see one person adopt a product and then influence those around them to do the same, even if it’s not (yet) widely adopted elsewhere.