Sixteen hours remained before the start of our second annual fat bike race, and the pressure was building. We’d christened the event “The Solstice Chase,” and replied to all event date queries with a swift, sobering slap to the face. In the waning hours before the start gun, pre-race stress had taken the opportunity to begin tap-dancing on the back of my eyeballs. My final reprieve before the imminent frenzy would be a quick pre-ride to check the course markings on the first loop. After that, I wouldn’t relax until the last rider had been accounted for. 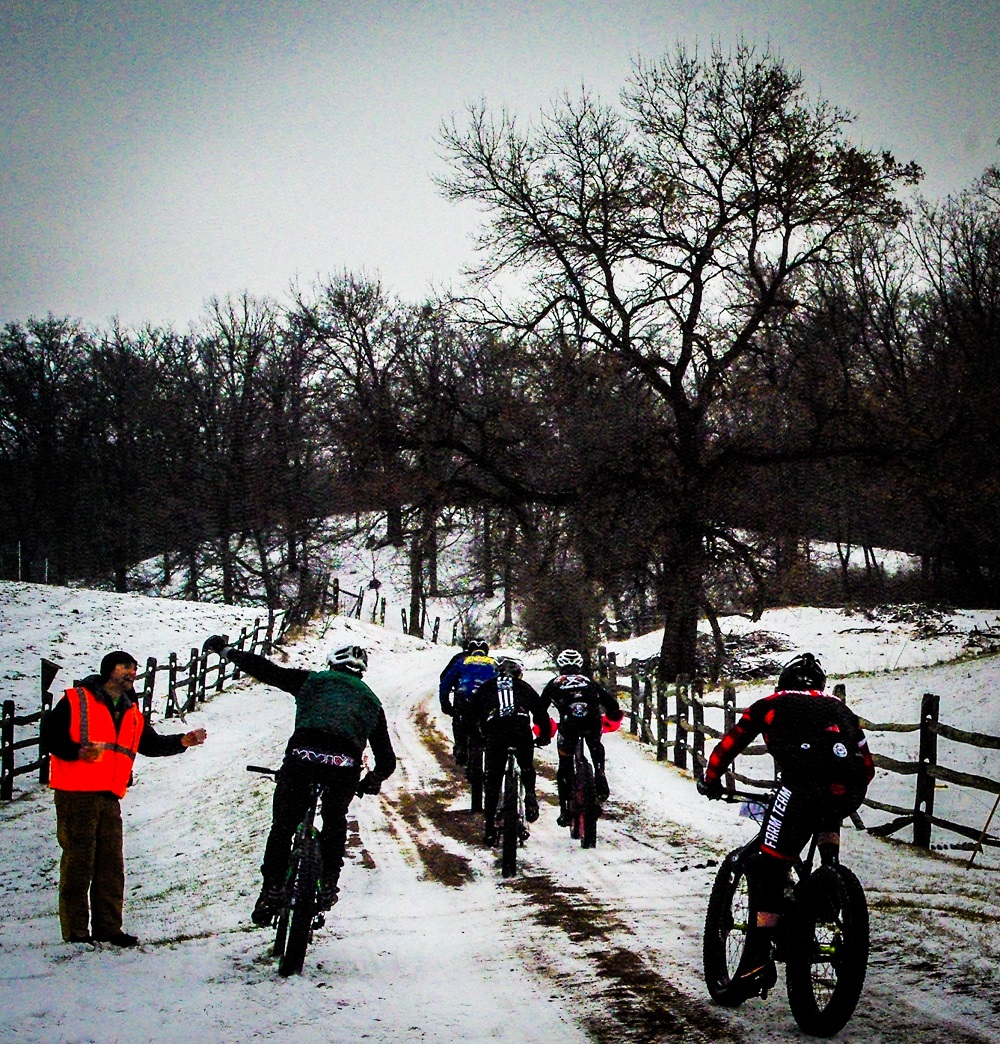 Pulling up to the start area in my rusted 1999 green Subaru Sport, all was calm. The banners were in place, and handsome Micah’s car was parked where it should be. I pulled in beside him and set about preparing for the ride. The only bicycle I’d been able to procure that evening was a twenty year old Trek 8000 with a rusted chain. As I hoisted the battered beast down from my decrepit roof rack, handsome Micah’s face screwed up in disgust. “Dude, you’re riding that?”

I flicked at the chain a couple times, loosening up some red and black flakes which fluttered to the ground. The bicycle’s sorry state didn’t matter, I needed to ride.

“The restorative effects of chain oil are remarkable.”

“What…” Micah’s voice drifted into silence. The sheer tonnage of the reasons as to why I shouldn’t mount that vehicle crushed him into a woeful resignation. But he’d dealt with me before and knew I couldn’t be reasoned with. “You own a bike shop,” he managed to whisper after a while.

“Part own,” I corrected. “Most of the time they don’t let me get near the merchandise.”

I sprayed oil liberally across the chain exactly as you’re not supposed to do and gave the crank an experimental spin. The lubricant helped, but halfway through the turn a rusted link jammed in the derailleur and it took all of my strength to continue the revolution.

I swung my leg over the top tube and found the clips. I began to pedal. With every stroke there was a pop and a jerk as that rusted link ground through something. Micah glided along beside me on his sweet new Salsa Beargrease which he’d just picked up at my shop the previous month. “How many people do you have registered?” He asked.

We settled into a comfortable pace and miraculously the rusted link began to loosen up. Snow coverage was sparse but our event was part of the Great Lakes Fat Bike Series, so we were still making all the riders use fat bikes. That condition didn’t apply to me on the pre-ride, of course.

As always, the act of spinning those wheels calmed my mind significantly. I was pleased with how well the route was marked. Every wrong turn was blocked off with ribbons and flags. Painted arrows indicated the correct directions. Yet I still knew that the next day I’d be berated by some lunkhead who somehow got off course even though that required hoisting his bicycle on his shoulders and scrambling up a twelve-foot barricade.

My eye began to twitch. I tried not to think about the upcoming battles and focused on the road. All too soon the ride was over. My bicycle disintegrated into dust as we pulled up to our vehicles.

“See you tomorrow,” I called out to Micah. Micah nodded. With that I jumped into my car and made my way down the four-mile drive to the shop. I pulled out the uncomfortable cot from the back room and threw down a sleeping bag as the pre-race checklists flashed through my head.

Eventually I drifted off into a couple hours of restless sleep before my alarm shrieked into the pre-dawn darkness with enough volume to separate my scalp from my cranium. Awake again! Curses!

I came out of the back room to find Frank, the other race director, frantically pouring over checklists of his own. We nodded at each other. There was no need to say anything, we were both consumed with the frenzy of putting on a successful event, and the obsession was written all over our faces.

For a race director, the morning of an event is even more of a blur than it is for competitors. We arrived at the venue in absolute darkness and repeated the same checks we’d gone through the night before. Time funneled by, and before we knew it riders began to arrive. We were ready for them, though, and the volunteers we’d been drilling with procedures and contingency plans set about their duties with remarkable precision.

Putting on our event was like adopting 155 children for the duration of the day. While the racers were on the course, they were ours. They entrusted us with their well-being, and in return they expected us to provide a safe course, food, and any other form of care that might be required. It was an awesome responsibility, and we had no intention of letting them down.

In a flash race time was upon us. I was handed a microphone. It had fallen to me to announce because there was nobody else available and willing to do it for free.

155 fat bikes roared into the winter woods. Racers howled with glee. The light flickered through snow-covered branches and was refracted by the ice, causing little rainbows to dance across the ground. It was glorious.

“Be safe everyone, ride smart!” At that point all I could hope was that everyone would return in one piece. 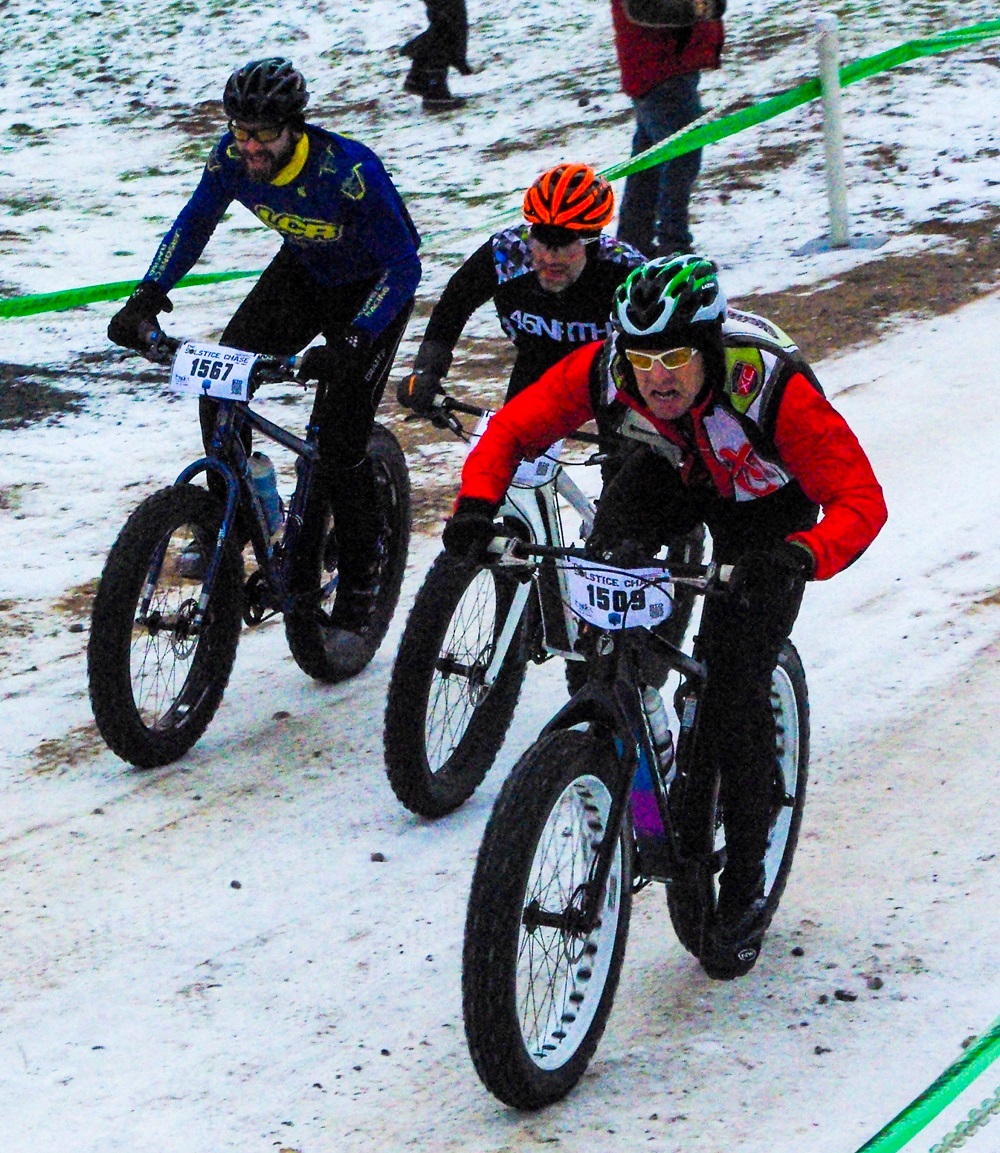 Silence for an hour, then the first riders tore through to begin their second lap. Jeff Hall led the men and April Morgan lead the women. A sigh of relief. If there was a problem with the course, we would have heard about it by now. After the leaders came a steady stream of riders, most of them smiling and howling with glee. Things were looking good. We might pull this off!

Someone handed me a beer. “This is from Podiumwear,” the person said. Podiumwear was one of our sponsors. Inspiration struck me. 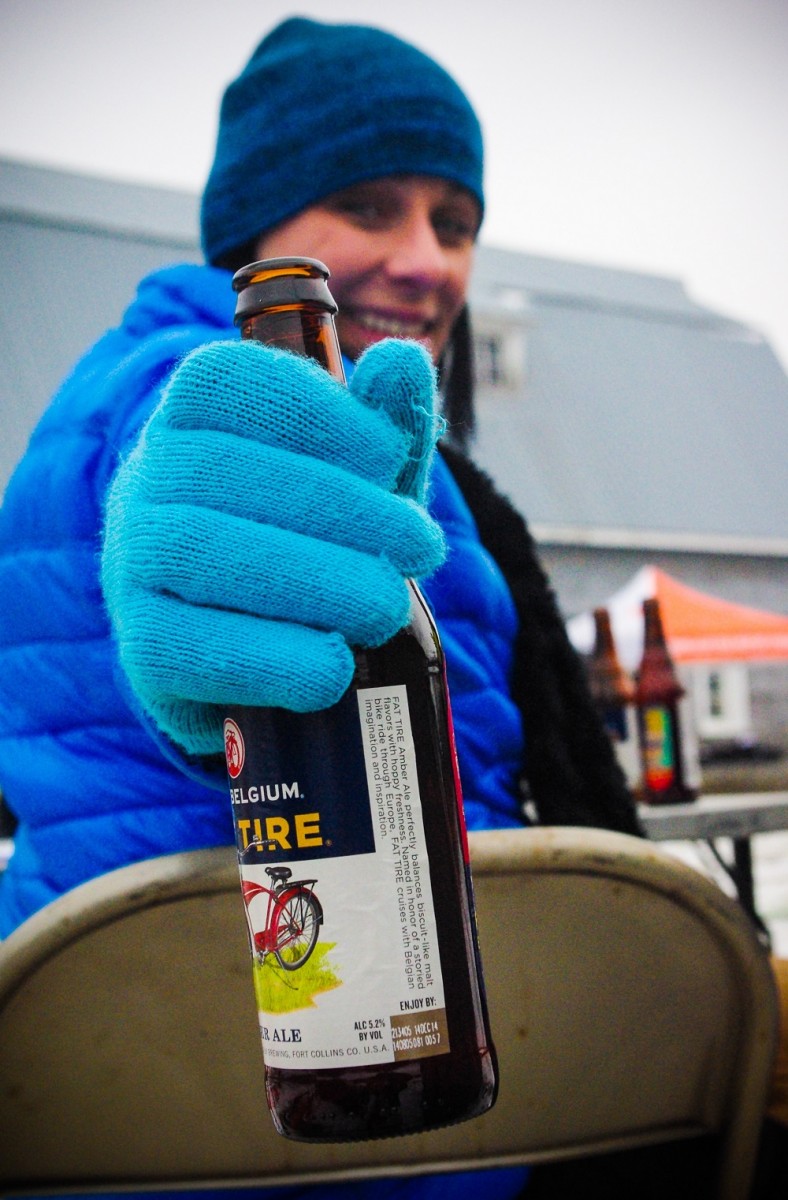 A few minutes later I was drinking beers provided by Twin Six, Hed, Locally Geared, and 45NRTH. The day started to look up.

Jeff Hall and April Morgan held on for their respective wins. I drank my beers and called off the names of finishers. Every one that came in was a ray of sunshine: it meant one less person that might have gotten lost or gotten hurt out on the trail. Soon Micah arrived for his finish. “Hey folks, let’s hear it for handsome Micah! He’s single ladies.” Everyone turned to look at Micah as he stood draped over his handlebars gasping for air. Micah looked up at me and shook his head. I cackled with laughter.

Eventually the timer guy came over. “That’s it, that’s everyone!”

I threw the microphone up in the air. We’d done it! Nothing could contain my joy. Suddenly I was at the heart of a cheering crowd. They were all patting me on the back and telling me what a great day it was.

“That’s the most fun I’ve ever had on two wheels.”

The stress was ending. Soon I’d be able to remove myself from the ranks of the undead. The race would be behind me, a success, and I could while away my hours pedaling in happy obscurity once more. A ray of light pierced the gathering crowds.

Suddenly a voice spoke up and ripped my newly developing sense of well-being away. “Are you putting on this race again next year?”

Slowly, and without conscious choice, my hand closed into a fist.

Walter Rhein is the author of the celebrated cross-country skiing novel Beyond Birkie Fever.  He is involved with organizing and promoting The Solstice Chase (Fat Bike Race), the Mammoth Gravel Classic (Gravel Ride), and the Gandy Dancer Trail Marathon (running marathon).  He did his first RAGBRAI at 13 and shoots for 10 centuries and 10 marathons a year.  A lifetime of riding has taught him that there’s no better way to see the world than from the seat of a bicycle.